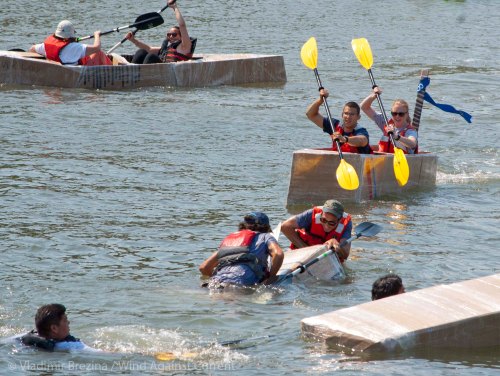 Last year, I wrote about the first annual Cardboard Kayak Race, held on City of Water Day at Governors Island.  This year, I was in it!

No, it’s not what you’re thinking. We didn’t build a boat out of cardboard and then race it. But others did! And I was part of a fleet of “safety kayaks” whose job it was to rescue paddlers whose cardboard boats sank (and fish out the sodden detritus).

The 2014 Cardboard Kayak Race was hosted by Con Edison and the Metropolitan Waterfront Alliance as part of NYC’s annual City of Water Day. Our friend Erik Baard, who runs the not-for-profit HarborLAB, supplied the safety kayaks for the day.

The challenge was straightforward: Each team (of up to 6 people) had to build a kayak from nothing but cardboard and tape. Specifically, the materials provided were: 10 sheets of 6 ft by 6ft corrugated cardboard; 3 rolls of black gaffing tape; and 10 rolls of clear waterproof packing tape.  Teams could bring their own tools, including wooden jigs, tape measures, knives, and the like.  But the final product had to be constructed of nothing but the cardboard and tape supplied.

The term “kayak” was largely notional: Any design was acceptable, so long as it floated and could be paddled by two team members.  Many boats, including some of the best performing, had high sides and a flat bottom. And one intrepid team built a cardboard paddleboard!

The racers had 2 hours to design and build the boats. Then it was time to race! The course ran out from Governors Island’s Pier 101 to a white buoy about 50 yards away; racers paddled out to the buoy, turned around, and paddled back.

The only catch? The race had several heats, and the winning boats then raced each other in semi-finals and the final. So the (increasingly waterlogged) cardboard of the winning boats had to withstand as many as three trips. And as the rules rather drolly state, “Boats that disintegrate mid-race will be disqualified.”

What happened? Did boats disintegrate? And who won?

Watch the slideshow to see. I will say that the final race was a nailbiter, pitting a beautifully-designed honest-to-God kayak (manned by two veteran paddlers from the North Brooklyn Boat Club) against last year’s reigning champions, Stevens Institute of Technology, in a deep-sided, flat-bottomed craft. Vlad captured the whole exciting story from his vantage point on dry land.

(Click on any photo to start slideshow—and be sure to read the captions!)

The raw materials (photo by Johna) 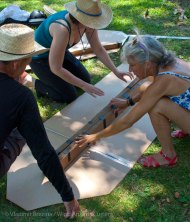 The scene on Kayak Hill 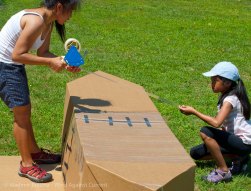 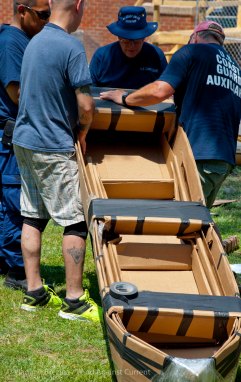 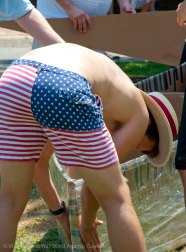 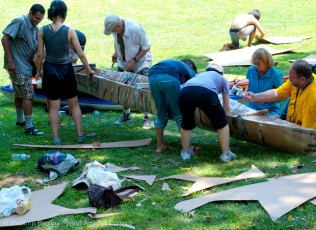 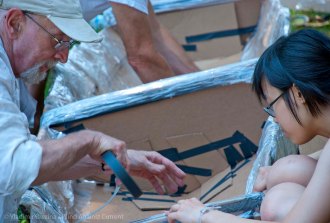 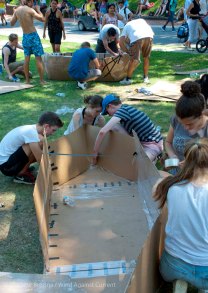 This one has a long way to go still…

It’s done! A formal portrait of the SS Stevens and crew—last year’s winners! 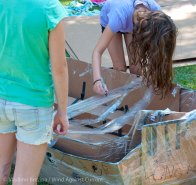 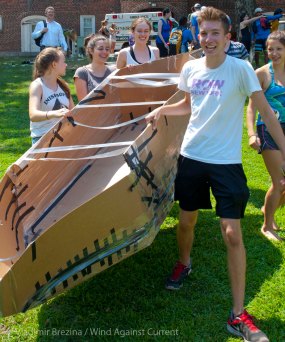 It’s as ready as it will ever be

All kayaks are assembled

The kayaks for the first heat are carried down to the dock. SS Stevens comes first. Whether intentionally or not, it has a swede form…

Carried by their crews. Note the keep fin!

SS Stevens has a good start. The paddlers are well synchronized :-)

… but SS Stevens has already rounded the buoy

… to victory in the first heat

The battle for second place

The kayaks for the second heat come down. First the banana boat…

Into the water… and a capsize right at the dock!!

They remount… but not for long

Sharp turn around the buoy 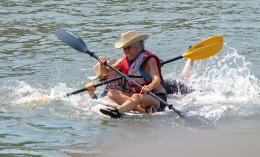 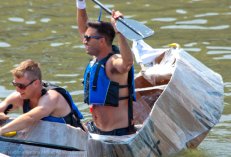 Still, with everyone else capsized, the banana boat wins this one

But behind, a desperate struggle unfolds

Johna and Erik retrieve the fallen

… to be hauled off ignominiously 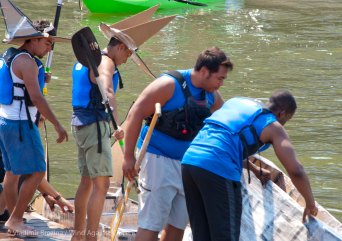 Watching and wondering when their turn will come…

They were right to be nervous 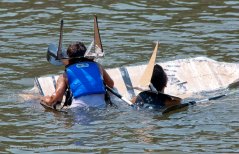 … and their turn comes soon enough

They try to remount

The Coast Guard Auxiliary powers by 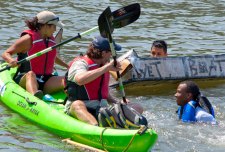 …. leaving the rescuing to others, for once

Cruising to victory in the third heat

The green kayaks clean up the course 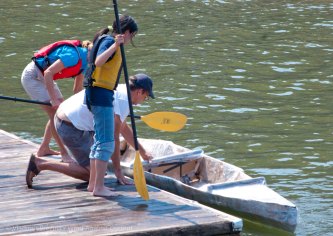 Will the pontoons help? 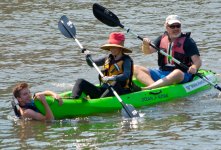 Johna (and Erik) to the rescue!

Fish it out, bring it back to the dock 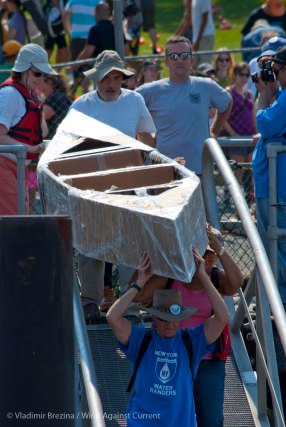 Remount! … or at least remount attempt…

The Coast Guard, well synchronized, has gone round the buoy and cruises back through the carnage

Easy victory in the fifth heat

Behind, multiple rescues are in progress

Swimming back to the dock

Bring in the casualties 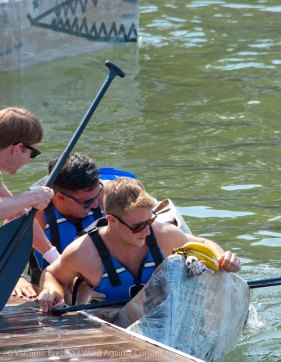 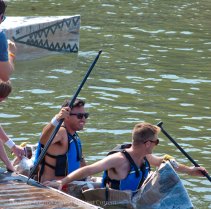 The banana boat looks a bit bedraggled, while the trim shark awaits

But the crew is willing

They barely leave the dock

… before doom overtakes them 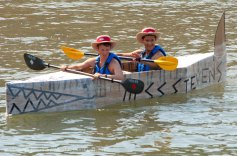 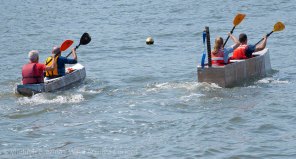 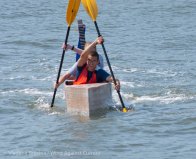 They go all out 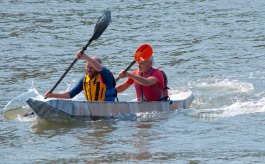 … but these guys are just a bit too good 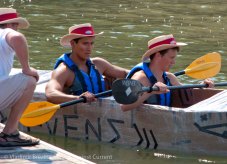 And now the final!! Tension builds…

SS Stevens vs. The Whitefish

The Whitefish powers round

… but SS Stevens has a big lead

… with The Whitefish in second place 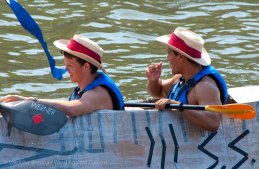 After the race, The Whitefish goes out for a spin… just a little too sharp a spin

Cowboy self-rescue on a cardboard kayak

Back on the boat!

… for a moment, at least 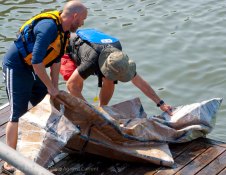 And now The Whitefish heads… 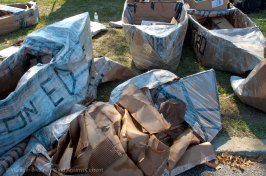 … along with all the others, into the great Graveyard of Cardboard Kayaks

(These and other photos are here.)

And here’s a brief video of the highlights of the race: