Paddling out from Manhattan for the day, we often find ourselves heading south to Sandy Hook, NJ. Our favorite spot to land there, about half-way down the bay side, is a picturesque little “island” of wooded high ground that rather improbably rises above the otherwise flat Sandy Hook

landscape. (Indeed, it is man-made, being the overgrown concrete ruins of an early 20th-century military installation, Battery Arrowsmith.) Separating the “island” from the “mainland” of Sandy Hook is a salt marsh.

Whenever we land at the “island”, we always take a few minutes to walk round to the back, to the edge of the salt marsh.  We go there to observe a mass display of invitation.

The marsh is fringed by a zone of bare, or sometimes sparsely overgrown, ground. Looking down closely, we see that the ground is studded with holes, large and small. 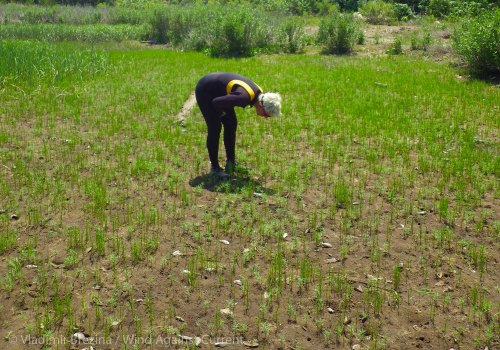 At first, standing there, we see nothing remarkable.

But within a minute or two, we glimpse, here and there, a furtive movement. Then more and more, and soon there is movement all around—movement of a curiously stereotyped sort.

Each hole is occupied by a fiddler crab.

There are both male and female crabs. They are easy to distinguish—the males have one greatly enlarged claw. And they use this claw in a characteristic courtship display. They stand next to their holes and repeatedly raise their large claws, inviting the females to enter.