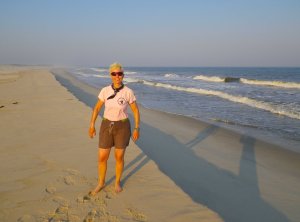 (click on photos to expand them—they look a lot better when they’re BIGGER!)

After last night’s drenching, we felt like blooded wilderness campers.

The day dawned windy and cloudy, but clearing. After breakfast and coffee out on the sandbar, we dried things as best we could, packed up, and set off. 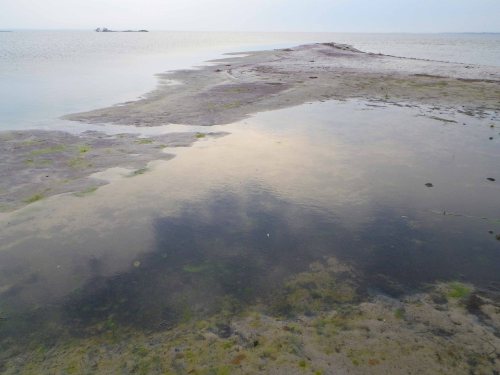 Johna walks out onto the sandbar… 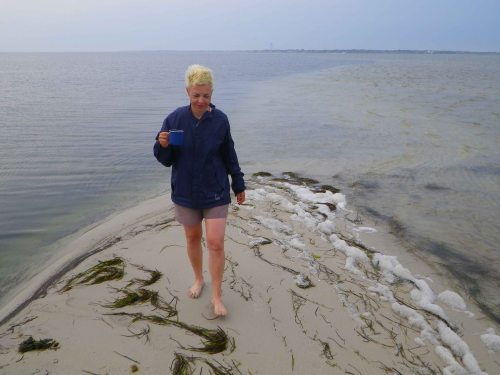 … with coffee in hand 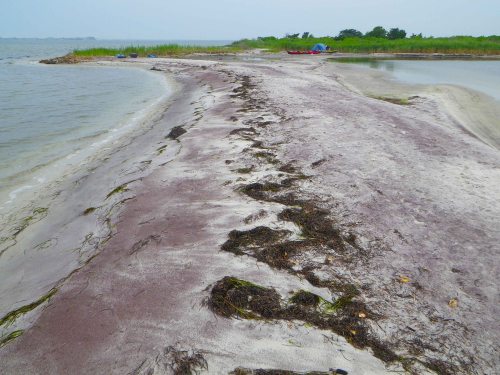 Our camp nestled among the reeds 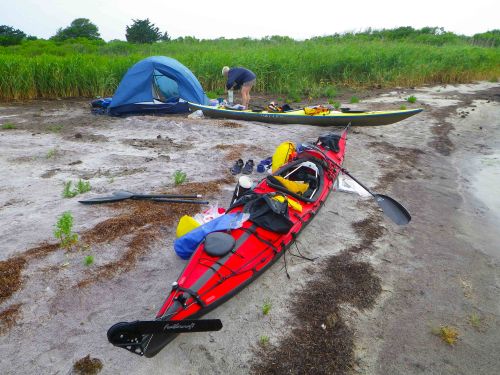 The west wind of the past two days continued. With the wind behind our backs, we surfed on the wind-driven waves east across the Great South Bay.

We surf across the Great South Bay 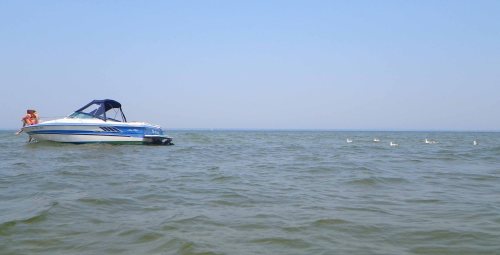 Humans and birds face into the wind

Johna gets close to Fire Island

The current was with us at first, but as the morning wore on, it turned against us. It wasn’t strong, but enough to convince us to draw close to Fire Island on our right, so we could take advantage of the wind while staying out of the current.

And, of course, to admire the houses (and people)!

It was the Friday before a holiday weekend (the Fourth of July was the upcoming Wednesday), and homeowners were out in force, making preparations for the festivities. After two days of watching seabirds and fish, it was quite a change to look at bronzed humans.

And, well, how to put this appropriately? Quite a lot of the homeowners were male… and in exceptionally good shape… and feeling no need to wear shirts in the morning sunshine. So Johna stayed particularly close to the shoreline… since the scenery was so good! (For our overseas readers who may be unaware, Fire Island has a high gay-male population.)

At midday we arrived at the Watch Hill marina and campground. It turned out to be a good thing we hadn’t tried to camp there the previous night. The only place to land kayaks was a little beach at the entrance to the marina, a good half-mile away from the campground, and there was no way 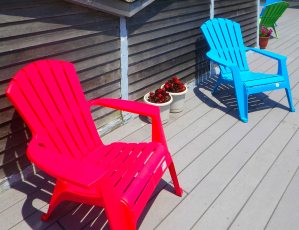 we could transport our loaded boats half a mile. (It wouldn’t be the last time we ran into this situation.) But we were able to restock with water, and have a quick bite: Burgers and fried clams, and a virgin daiquiri for Vlad. And for the first time in days, no sand in the food!. 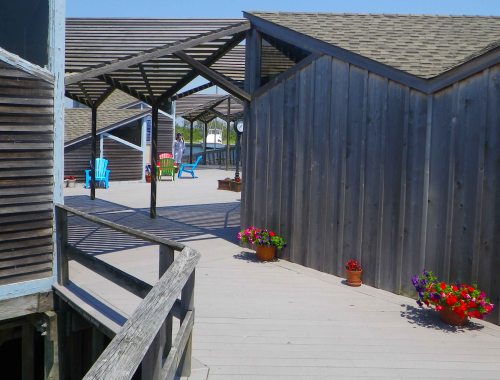 Watch Hill is no rundown marina, but an elegant, upscale establishment… 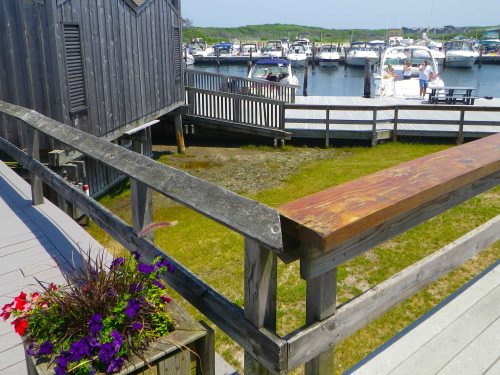 … with plenty of fancy motor boats

Then we continued east, along the grassy edge of Fire Island. In the late afternoon, we passed under the William Floyd Parkway bridge into the next bay to the east, Moriches Bay.

We skirt the edge of Fire Island… 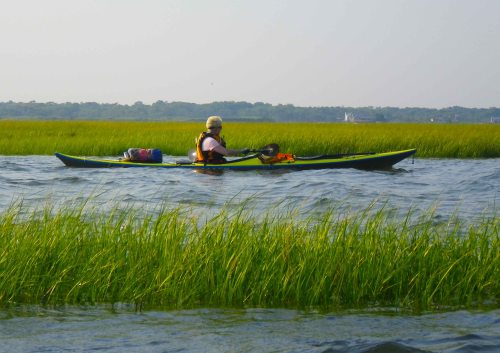 … finding our way through grassy channels

Once again, we paddled until the sun was low on the horizon, then began scouting out campsites. We settled on a small beach (“Fire Island Beach”) girded all around by reeds, but with a road leading out over the dunes—carrying the possibility of crossing easily over to the ocean side of Fire Island. For a day now, as we had paddled along Fire Island, we had heard a powerful rhythmic booming just behind the sand dunes—the Atlantic surf! Now we would see it.

Sure enough, by following the road we found a spot to climb over the low dunes. Suddenly, we found ourselves on a wide, pristinely white beach, completely empty, extending in both directions into the hazy distance, with the waves booming and rumbling in front of us. In the light of the setting sun, the sight quite took our breath away for a few moments.

…then climb over the dunes… 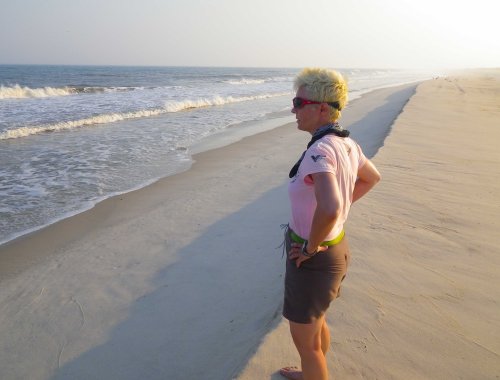 … and a few moments later, face the Atlantic Ocean

Empty beach, except for the birds, and, in the far distance, a few fishermen 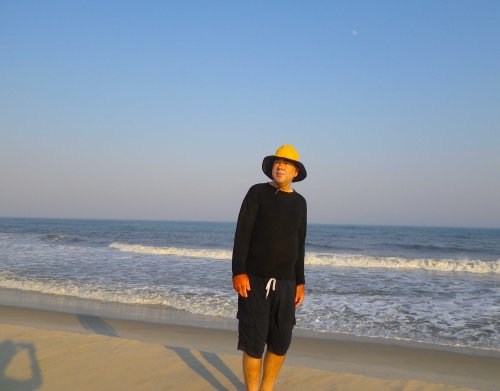 We pose for the camera: Vlad… (photo by Johna)

… and Johna (photo by Vlad)

Johna splashes through the surf…

Vlad wandered about taking photos. Johna looked at the surf and shuddered inwardly. In two days’ time we would be making the “run up the coast”—paddling a 35-mile stretch through the ocean along a beach very much like this one. We weren’t planning to land through the pounding surf, but in an emergency we might have to—and then we we’d risk damaging our boats, and ourselves. So as Johna watched the relentless crashing waves, she thought about the challenge of landing in them.

… and considers landing through it 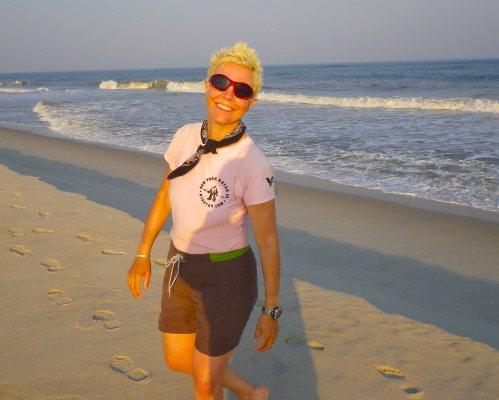 But, if all goes well, we won’t have to!

From the top of the dunes, there is a panoramic view of both bay and ocean

Low evening sun over the bay

We walk back to camp 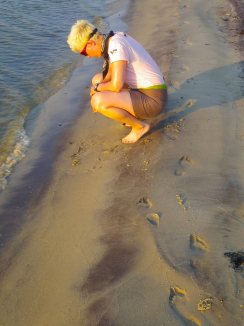 We crossed back over to the campground, pitched the tent, and made dinner. Due to last night’s drenching, all the bedding was damp—but thankfully the evening was warm.

We took a stroll along the beach, through the warm, gently lapping waves, then fell asleep just as the sun set. 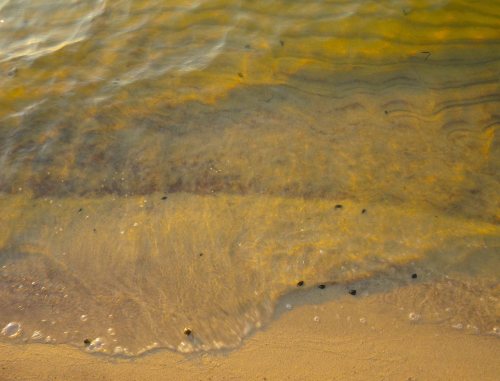 …in the local population of hermit crabs