A Prayer for Puerto Rico

Vlad loved Puerto Rico. One of his dreams was that we’d go there together some day, perhaps even circumnavigate the island by kayak (though he warned me about sharks).

Vlad knew the island well. For many years, he collaborated with a colleague at the Institute for Neurobiology at the University of Puerto Rico. That meant taking regular trips to Puerto Rico, at least annually, sometimes more often. And he took advantage of those trips to explore the island and its environs.

View of La Perla from the Institute of Neurobiology

Entirely aside from the exciting work he did with his colleagues, Vlad really loved the place itself: the warm, moist tropical air, the vivid colors, and most of all, the people.  He often told stories about his time there. One of my favorites was about the “palmetto bugs” that scientists caught from the lab floor for experiments (apparently it was cheaper and easier to catch your own than to order them from suppliers.)

But my all-time favorite story was when he talked about how the scientists in his lab were almost universally young, beautiful women. I didn’t believe him, so he forwarded a photo “as evidence” (as he put it). Unfortunately I can no longer find it, but the photo indeed featured a half-dozen or so mini-skirt-clad young women holding martini glasses and smiling at the camera (it was an evening outing of the lab). Not exactly the first image that comes to mind when one thinks of “a gathering of neuroscientists”–no wonder Vlad was enamored of the place!

Beyond the sheer physical beauty of the island and its inhabitants, Vlad also appreciated its many biological wonders. Among  them: the bioluminescent bay
at Vieques Island, the bat caves, and the El Yunque Rain Forest.

I know he would be deeply saddened by the devastation that Hurricane Maria has wreaked on Puerto Rico. Fortunately the Institute for Neurobiology has reported that it has survived; but recovery will be a long, slow, painful process for them, and for everyone affected by the storm.

If you want to contribute, here is a list of charities that have been highly rated by CharityWatch and are contributing to Irma relief in Puerto Rico.

Winter sunshine on the Hudson

7:34 a.m. Metro-North train to Peekskill. Spring-like day, mix of sun and clouds. Cold front crossing in the morning and early afternoon; mostly cloudy, then gradual clearing, and mostly sunny toward the end of the trip. Very windy all day; small-craft advisory. Launched around 9:45 a.m. Few ice floes still in Peekskill Harbor and in coves south of Peekskill, and some snow further south along the shoreline of Haverstraw Bay, but, part from the bare trees, these the only signs remaining of real winter. Water still cold (according to the Web in the mid- to upper- 30s), but no longer stinging on contact.

Paddled in moderate tail wind (10-15 knots) and following seas (1-2 ft), but against the flood current, south to entrance of Haverstraw Bay, then crossed to west shore and followed it south.

Sequence of points provided shelter from the wind, then wind and waves increased with fetch before the next point. Periods of increased gusty wind raised numerous whitecaps in the main channel through the middle of Haverstraw Bay. Water leaden grey except turning light brown in the brief intervals of sunshine. South to the Tappan Zee. Current now starting to ebb. Wind increased from the west, to 20 knots or so, just north of the Tappan Zee bridge. (Using wind meter, found that real wind speeds about 5 knots less than would have estimated. Quite strong wind was only about 15 knots.)

Confused 2-ft breaking waves. Boat trim incorrect, so very strong and hard-to-control tendency to turn directly into wind. (Note: Kayakers call this “weathercocking”. As Vlad notes, in some cases it can result from loading (“trimming”) the boat improperly; in other cases it’s an inherent quality of the craft.)

Must ballast stern in tail winds and following seas. Although open framework, Tappan Zee Bridge provided significant shelter for some distance past it, but the same conditions again just north of Piermont Pier. Lunch at Italian Gardens.

Hard to pee unobserved; people everywhere along the Palisades path, and no leaves to shield my mango suit. (Note: We kayakers are forever asked, “But how do you manage to pee?” The answer: With difficulty, it’s an art!)

Wind now apparently coming from the northeast, so crossed river back to the eastern shore. Clouds now starting to break. Making very fast progress with fast ebb current (probably speeded by runoff) and tail wind. Wind-with-current conditions really smooth out the water; waves only 6 inches, but breaking. (Against the current, this wind would have produced waves of 3 ft or more.) By Yonkers wind increased again to 15-20 knots for the rest of the trip, breaking waves building to 1-2 ft. Landed at Dyckman Street around 4:30 p.m.

(Note: This is Vlad coming into his own. Notice the attention he pays to wind and current conditions, plus obvious preparation beforehand (looking up the weather and water temp). What’s most significant—though also very subtle—is the way he compares the objective situation (“..according to the Web site, mid- to upper- 30s”) with his subjective experience of it (“…no longer stinging on contact.”). He does this several times in this piece. The net effect over years of experience will be his ability to gauge the situation at a glance, with almost supernatural accuracy. In future years he will be able to estimate the wind and water conditions and forecast the weather without appearing to consult any instrumentation–the Vlad I knew.) 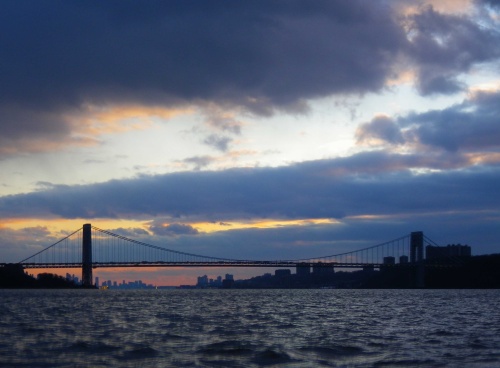 Launched at Dyckman Street around 10 a.m. First paddle since ice gone. Relatively mild winter day, but foggy, despite forecast, essentially all day. Brighter spots through the clouds now and then, but rather grey, and so a little cold, most of the time.

Paddled south under George Washington Bridge and along the Manhattan shoreline, with ebb current. Slight head wind (10 knots) and so some whitecaps. Later wind calmed down; in the afternoon completely calm.

Reached Downtown Boathouse around 11:30 a.m. Turned round and returned, dodging between the piers, against the current. Just south of Chelsea Piers sopke with paddler from there, Rufus, with all-new red Khatsalano and full high-tech equipment. Gave him my phone number: may go out with him and his group of Feathercrafters in future.

Lunch on the water in empty marina immediately adjacent to driving range at Chelsea Piers. Then continued north along Manhattan shoreline to 79th Street. now should have been strong flood current, but still slight ebb. Some weak flood current only much later, at peak of astronomical cycle, and in retrospect ebb current in the morning was much stronger than it should have been: presumably runoff and ice melting up the river.

From 79th Street crossed river and went up along New Jersey side. Under George Washington Bridge and back across to Dyckman Street. Started packing up the boat around 4 p.m.; now, of course, sun finally coming out, weakly.

(Note: Here we see more of the essential Vlad. First his characterization of a 10-kt wind as “slight”; most paddlers consider that substantial! Second is his joy in connecting with kindred spirits, along with his teasing characterization of the “high-tech equipment”. And finally, there’s his thoughtful analysis of the current; indeed in springtime (which was rapidly approaching) the runoff often cancels the flood entirely in the Hudson.)