A Prayer for Puerto Rico

Vlad loved Puerto Rico. One of his dreams was that we’d go there together some day, perhaps even circumnavigate the island by kayak (though he warned me about sharks).

Vlad knew the island well. For many years, he collaborated with a colleague at the Institute for Neurobiology at the University of Puerto Rico. That meant taking regular trips to Puerto Rico, at least annually, sometimes more often. And he took advantage of those trips to explore the island and its environs.

View of La Perla from the Institute of Neurobiology

Entirely aside from the exciting work he did with his colleagues, Vlad really loved the place itself: the warm, moist tropical air, the vivid colors, and most of all, the people.  He often told stories about his time there. One of my favorites was about the “palmetto bugs” that scientists caught from the lab floor for experiments (apparently it was cheaper and easier to catch your own than to order them from suppliers.) 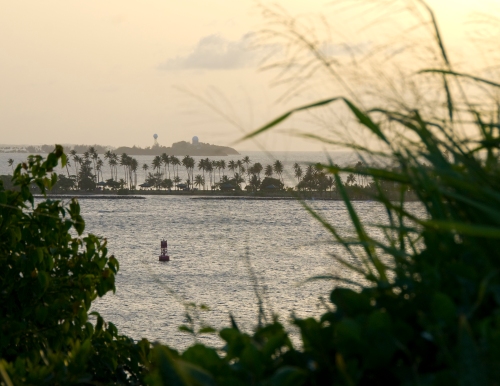 But my all-time favorite story was when he talked about how the scientists in his lab were almost universally young, beautiful women. I didn’t believe him, so he forwarded a photo “as evidence” (as he put it). Unfortunately I can no longer find it, but the photo indeed featured a half-dozen or so mini-skirt-clad young women holding martini glasses and smiling at the camera (it was an evening outing of the lab). Not exactly the first image that comes to mind when one thinks of “a gathering of neuroscientists”–no wonder Vlad was enamored of the place!

Beyond the sheer physical beauty of the island and its inhabitants, Vlad also appreciated its many biological wonders. Among  them: the bioluminescent bay
at Vieques Island, the bat caves, and the El Yunque Rain Forest.

I know he would be deeply saddened by the devastation that Hurricane Maria has wreaked on Puerto Rico. Fortunately the Institute for Neurobiology has reported that it has survived; but recovery will be a long, slow, painful process for them, and for everyone affected by the storm.

If you want to contribute, here is a list of charities that have been highly rated by CharityWatch and are contributing to Irma relief in Puerto Rico.

19 responses to “A Prayer for Puerto Rico”