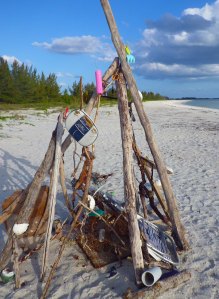 Her own examples start with man-made sculptures, but conclude with her “favourite sculptures [that] come from the natural world… sculpted by wind… and water…”

Here is a sculpture that we came across recently that seems poised between the two worlds, being both man-made and sculpted by natural forces, wind, water, and sun… 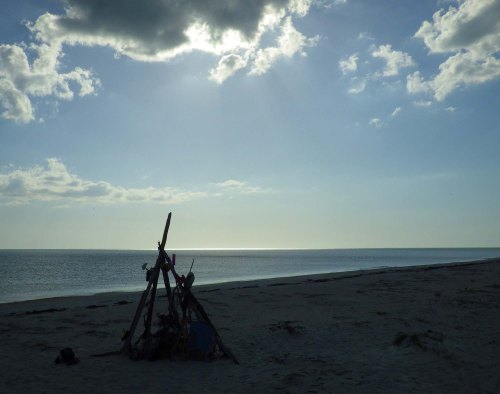 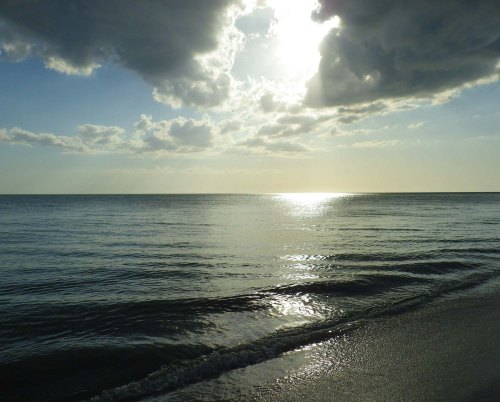 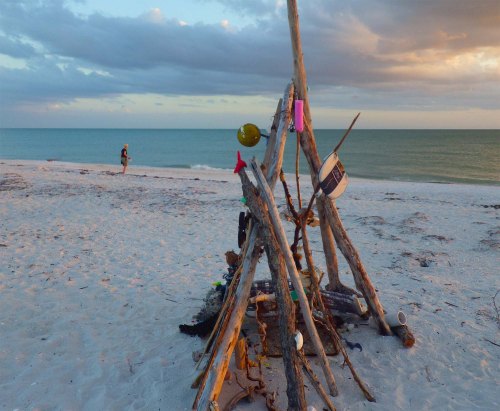 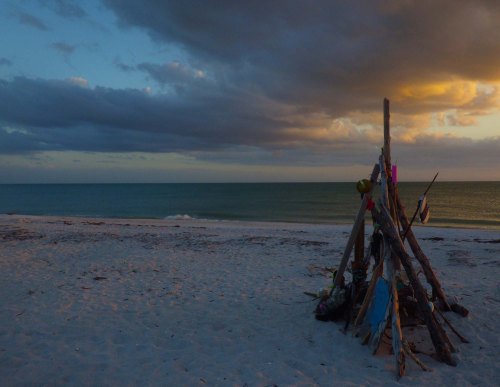 And in the morning…

On North Captiva Island, Florida, during our kayak trip down the Gulf Coast of Florida in April (see here and here).

And speaking of beach sculptures, check out this one, courtesy of our friends 2 Geeks @ 3 Knots!

This week’s Photo Challenge is Companionable. One interpretation was here; here’s another one.

In the bird world, as in the human—

This week’s Photo Challenge is Companionable.

Rafted up companionably for lunch… 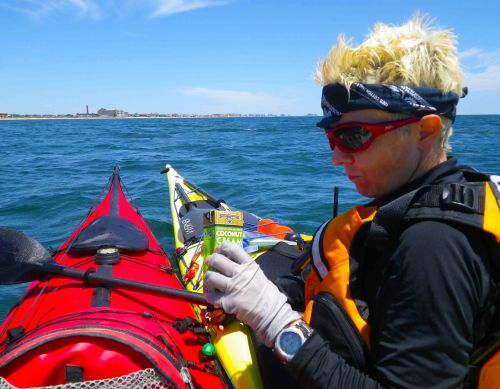 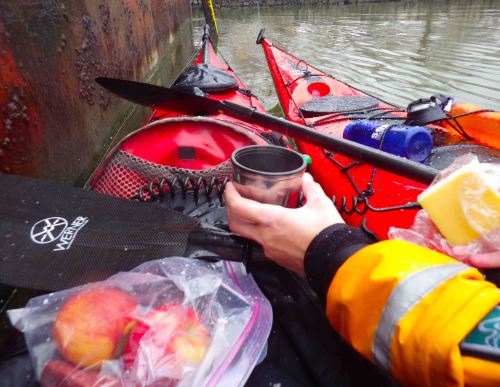 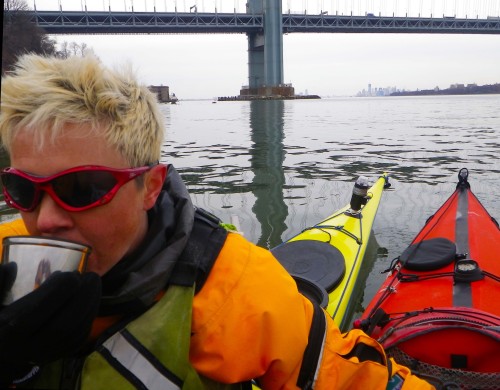 Another interpretation of “Companionable” is here.

“Yay, kitty cat!”  the little girl in front of us yelled. The woman in the parade stopped and smiled. She was wearing a brown fur costume—perhaps too warm for this sunny June day—and a button nose. Whiskers striped her cheeks.

Shyly, the kids did. Then they went back to shouting at the weird, wacky, and wonderful array of costumed creatures before us: “Yay bunny rabbit!” “Yay green lady!” “Yay guy on stilts!”

It almost didn’t happen this year. Hurricane Sandy devastated Coney Island, and the not-for-profit that has run the parade since 1983, Coney Island USA, was over $100,000 in the hole. The nonprofit used to get most of the funds to put on the parade from its museum and performance studio, which was demolished by Sandy.

In a last-ditch attempt to keep the parade going, Coney Island USA launched a Kickstarter campaign—which netted over $117,000. Enough to keep the show going on.

And enough to generate a wonderful sense of celebration. Coney Island is back, bigger, better, wackier, and wilder than ever. This year’s parade really spotlighted the reinvention of Coney Island from nostalgic landmark to au-courant hotspot—perfectly blending the traditional and the cutting edge. (Exhibit A:  The only float sponsored by a national brand was sponsored by Pabst Blue Ribbon—the lowbrow canned brew favored by Brooklyn hipsters everywhere. Go figure!)

The kids in front of us had certainly gotten the message. They loved everything about the parade, and weren’t shy about asking the paraders to perform: “Burn some rubber!” they shouted at the vintage cars, glittering in the early-summer sun. (The drivers obligingly did.) 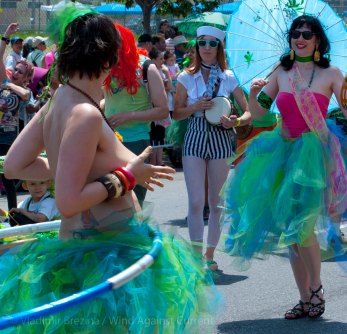 And the kids didn’t seem to be too impressed by the eye-boggling array of nipple pasties, codpieces, and jiggling buttocks. Mermaids and their consorts require very little clothing, so creatively embellished nudity is one of the hallmarks of the Mermaid Parade. But it’s not something the kids seemed to care much about, one way or the other.

Instead, they applauded anything and everything, indiscriminately.

“Yay police!” they shouted out at one uniformed NYPD officer, who shot them a puzzled look, then grinned and waved.  Although the parade was well-patrolled, the officers almost seemed unnecessary—I’ve never been in a crowd that large where the overwhelming mood was so cordial and friendly. (The day of the parade is informally called by the NYPD “Coney Island’s Crime-Free Day”.)

Vlad took almost 2000 photos during the two-hour parade. See below for a gallery of the best photos.

And when it ended, we made our way onto the packed beach so I could dip a toe into the ocean, then headed back for the subway ride home.

At the gates to the Coney Island–Stillwell Avenue subway stop, we got one last surprise: As we went to add more money to our metro cards, a cop waved us through the open gates next to the turnstile. “Subway’s free today,” he said.

END_OF_DOCUMENT_TOKEN_TO_BE_REPLACED

Photography 101: Viewing the World with a Photographer’s Eye, II

This is the third installment of Photography 101.

In part one of “Viewing the World with a Photographer’s Eye,” photographer Ming Thein talked about the basics of what makes a good photograph. In today’s part two, he takes a look at the little things you can do to make your images stronger — shot discipline, selection — as well as common mistakes and things to practice for the future.

There’s the small matter of shot discipline to think about. If you’ve ever wondered why some people’s images look crisper and punchier, it’s probably because they’re taken care the whole way through the image-making process. Shot discipline covers everything from eliminating camera shake to choosing the optimum apertures, processing RAW files and saving uncompressed versions. It also extends outside the technical disciplines to editing, and this isn’t the same as post processing (or what’s commonly thought of as “Photoshop”). 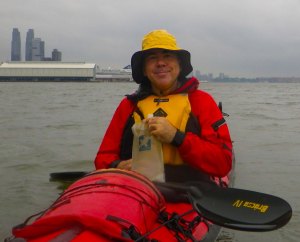 Unlike Johna, I’ve been reluctant to write too much about myself on Wind Against Current. Who would want to read that stuff?  And now I don’t have to write anything—NYC Swim has done it for me.

In each issue of their Cross Currents Newsletter, they profile a particular swimmer, or sometimes a volunteer, such as a kayaker, who has worked extensively with them. And so the latest issue of the newsletter features a piece entitled Volunteer of the Week: Vladimir Brezina…

It’s got something about what I do when I am not kayaking, or blogging. So, if you want to read such stuff, there it is! :-)

Last night we had a minor bit of fun awaiting the “super” Supermoon.

But our view of the horizon is by no means complete. There are quite a few tall buildings around ours that block the view. Would the moon rise behind one of these, or in a gap between them? I suppose we could have gotten out the compass… But we preferred to wait and be surprised.

And there is was! It appeared in one of the gaps.

Astronomical predictions are wonderful, but you also need luck…

Weekly Photo Challenge: The World Through My Eyes

This week’s Photo Challenge is The World Through Your Eyes. 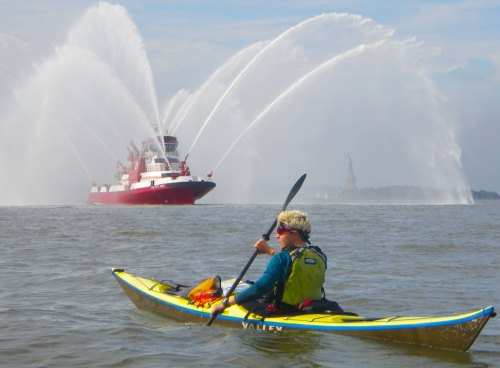 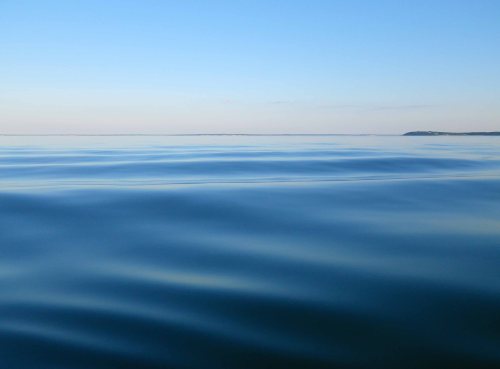 The Summer Solstice has just occurred, so— Happy Summer!

Summertime,
And the livin’ is easy…

(Of course, Happy Winter! to those in the Southern Hemisphere :-) )