… the ragged rock in the restless waters,
Waves wash over it, fogs conceal it;
On a halcyon day it is merely a monument,
In navigable weather it is always a seamark
To lay a course by: but in the sombre season
Or the sudden fury, is what it always was.

The Dry Salvages is the third of T.S. Eliot‘s Four Quartets, a landmark of 20th-century English poetry. In a prefatory note, Eliot tells us that the Dry Salvages are a group of isolated rocks offshore in the Atlantic Ocean, but in the body of the poem they are never  mentioned again by name. Rather, their symbolic reach expands immediately to encompass one of the larger themes of the poem, that of water as the eternal agent of birth and death. It might seem, therefore, that the Dry Salvages are a mythical place.

But they are real, and a couple of days ago we paddled out to see them.

The Dry Salvages are located in the Atlantic Ocean about two miles north-east of Rockport, on Cape Ann, Massachusetts. They are “dry” even at high tide, in contrast to an adjacent, lower reef, the Little Salvages, which are submerged at high tide.

Even from the far distance, it was hard to miss the peculiar white peaks rising out of the ocean ahead of us. It almost seemed that we were somewhere in Patagonia, paddling toward a huge snow-covered mountain fifty miles off.

But even when we did reach them, the rocks remained imposing. At low water on a spring tide (as it then was), they towered over us, capped with dazzling white bird guano and surmounted by innumerable birds. 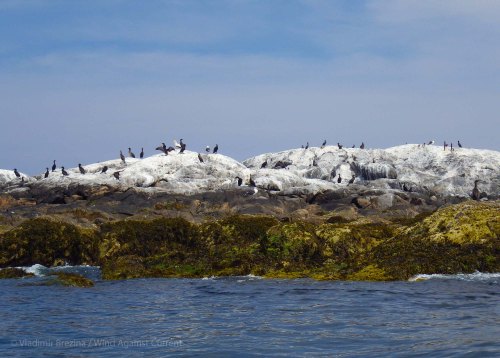 The birds were mostly gulls and many, many cormorants. But at the very top of the rock there stood a beautiful solitary bird, white tinged with yellow, with a gray beak and legs and black-tipped wings, that we later identified (we think) as a Northern Gannet. 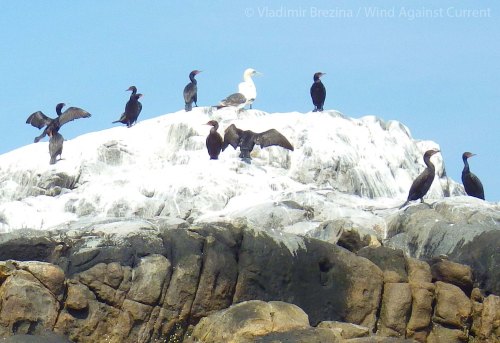 Surf beat on the outlying rocks. And the rocks were just the right distance apart, with “interesting” water between them, for some fun rock gardening…

Seals lounged on the rocks, frolicked in the water, and swam up almost to touch our boats. 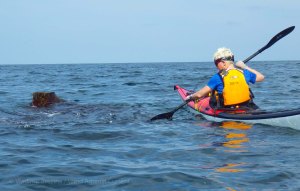 As might be expected with such dangerous rocks, around them are several wrecks. We came across one that was only partly submerged at low tide.

The blue sea and sky, surf-beaten offshore rocks, wrecks, birds, seals… Clearly, T.S. Eliot knew what he was about. Quite apart from their literary connotations, the Dry Salvages are a kayaker’s paradise!

We paddle into the rocks 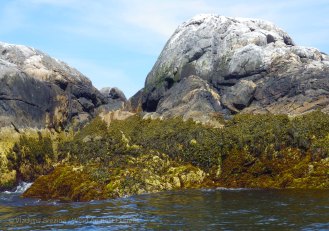 The rocks tower above 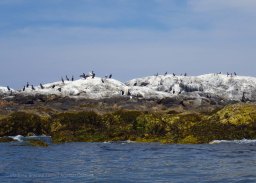 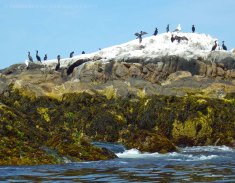 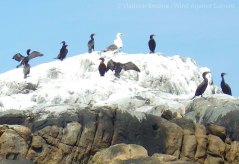 Top of the rock

All alone in the empty ocean

… except for the twin lighthouses of Thacher Island in the distance 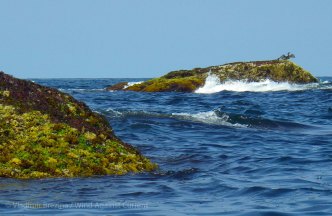 Curious seals in the surf

Seals hauled out on the Little Salvages, with the Dry Salvages behind

.
And this was just one stop on our trip around Cape Ann—more to come!

59 responses to “The Dry Salvages”