If It’s Summer, It’s Time for a Sandy Hook Paddle!

Yesterday was a perfect summer’s day.

Well, if your definition of  “perfect” includes placid weather, blue skies, and hot sunshine.  Mine does—if I’m on the water and can cool off with a roll or two. Vlad is not so happy in the heat—and prefers more exciting “conditions”. As you’ll see, we both got our preferences…

We decided to go for a long trip—“long” being anything more than 30 nautical miles—not something we’ve done much of lately. The currents dictated it would be to Sandy Hook and back, returning after dark—again, a pleasant change of pace.

And the conditions were calm—a light breeze from the south, which would be in our faces on the way down, cooling us down, then helping us along on the return.

Here are the highlights. (Click on  any photo to start a slideshow.)

As we leave Manhattan, we pass two icons… well, one of them passes us

… as we paddle through the Bay Ridge anchorage (photo by Johna)

The ebb current sweeps us down to the Narrows

We paddle under the Verrazano-Narrows Bridge… 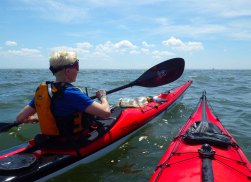 … and out into the Lower Bay 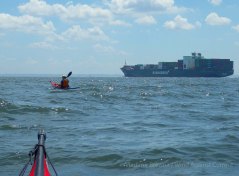 We race the traffic in Ambrose Channel!

Just the blue sea and sky…

… and a sailboat and a lighthouse

At the northwest tip of Sandy Hook, we land under our favorite osprey nest

And on a brutally hot day, sights like this don’t exactly inspire confidence

But we find a shady spot for lunch

After lunch, we set off again for Manhattan, visible in the distance 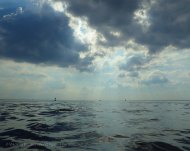 The view out to sea

We cross Ambrose Channel once more

… as do the red ones

Fishing in the late afternoon glitter 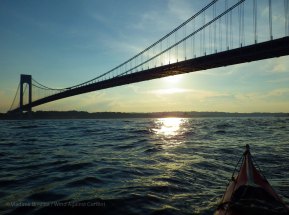 We pass back under the Verrazano-Narrows Bridge 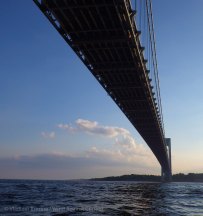 Soft colors of the evening make their appearance 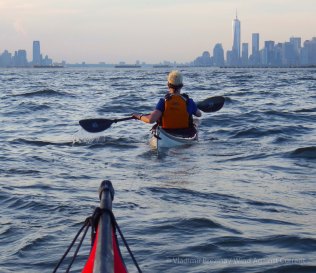 Manhattan is once more in direct sight

Nature is putting on quite a light show

Looking back, a high sunlit cloud 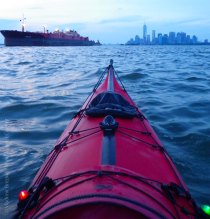 It’s getting dark—time to turn on our lights

.
We were almost home. But then, it got exciting!

That cloud was a thundercloud, as it turned out.

As the light faded, we stopped to put on our navigation lights. But what was that over to the west?

I gestured with my paddle to the bank of clouds towering over New Jersey.

Actually, it didn’t—at least not like any lightning I’d ever seen. It looked more like fireworks. A spectacular fork of fire sliced through the sky. The whole bank of clouds lit up briefly, shadowing the Jersey City skyline. But strangely… no thunder.

It happened again. And again. Every few seconds, in fact.

The wind began to blow strongly,  from the west, driving waves ahead of it.

The sky was darkening, the clouds opaque (except when lit up with the strange, soundless lightning). I could smell the air:  hot, dry, and scorched.

It felt like a thunderstorm: Clouds, and wind, and lightning. But no sound (except for the steadily-increasing roar of the wind). And no rain.

By this time we were just ready to cross from Governors Island to the Battery, and then up the Hudson and home. (Sorry, no photos. It was dark. And we had to concentrate!)

Within a few yards of leaving Governors Island, we plunged into a tide rip. I’m not sure how fast we were going (too dark to read the GPS), but we splashed up and down, this way and that, as the waves collided and tossed us around. It was the first of several—we counted three or four before we stopped counting.

Fortunately the Staten Island Ferry had just left, so we didn’t have to worry about staying out of its way. And most of the large commercial vessels were already anchored.

But there was still plenty of traffic, despite the storm. In the gathering gloom we made out another boat, one of the summer cruise boats, and made sure to give it a wide berth.

But what was that following behind it? Another cruise boat—and the captain didn’t appear to see us at all! (The radio, by this time, had gone eerily silent—to the point where I wondered whether it had stopped working—and in any event, I was too busy paddling to grab it and announce ourselves.)

We stopped, and the boat passed a few yards in front of us, and we were roundly cheered by the partygoers. Normally I respond with a wave and a smile, but this time I was too busy maintaining balance (and forward momentum).

We made it across without further incident—other than the western sky pulsing with soundless light every few seconds, and a couple more intense tide rips that tossed us around.

Then, just as we were ready to breathe a sigh of relief, another tide rip grabbed us, pushing us so sharply into the sea wall that I was once again fighting to stay upright. I wanted to turn the boat out into the river, but edging, sweeping, and ruddering strokes didn’t seem to have any effect.

What to do? Paddle fast—get momentum, and use that to get control of the boat.

Which I did, and finally pulled out into the current—away from the chop and reflected waves and wakes at the seawall.

We rode the current the rest of the way home against the eerie backdrop of the silent lightning, listening to the wind roar and the clouds mass up against the northern sky.

“That was fun!” Vlad exclaimed with satisfaction, as we pulled into Pier 40.

Yeah, it was actually. A spectacular ending to a perfect summer’s paddle!

55 responses to “If It’s Summer, It’s Time for a Sandy Hook Paddle!”