The day after: Johna and Cynthia trying to take apart Johna’s stuck paddle…

Here’s what we wrote down…

December 2013: How to load the boats from the chickee??

Shakedown trips. We took two “shakedown” trips to prepare for the challenge, one in April and one in December 2013. At the time, we were frustrated because we didn’t seem to be going fast enough—during the challenge, we covered in one day what we’d covered in three or four of our shakedown days. But the slow pace gave us familiarity with the route and the region, which we relied on many times during the challenge. We were particularly thankful during the challenge that we’d learned ahead of time about the joys and frustrations of camping on the Everglades chickees. And that we’d learned how to cope with one of the major Florida hazards—not alligators, but bugs!

Pre-race preparation. Johna went on an intensive gym regimen for the six weeks leading up to the race. It helped, a lot. Particularly when it came to carrying the boats and other physical exertion. She also stopped drinking alcohol and caffeine for two weeks before the race, largely to ensure adequate hydration (and because we planned to drink coffee and take caffeine tablets during the race for extra energy, and it only made sense to have as low a caffeine threshold as possible). That was effective.

Getting enough pre-race sleep. Johna made a point of getting 8-10 hours of sleep a night prior to the race. Vlad didn’t. And during the challenge, Vlad was considerably more susceptible than Johna to hypothermia—the converse of the usual case. We’re pretty confident there’s a strong link between sleep deprivation and hypothermia…

A pre-race manicure.Don’t laugh! Hangnails can be both painful and downright dangerous, if they keep you from grabbing something quickly. And keep in mind that salt water can do a job on cuts and abrasions. Getting a manicure in advance of the trip eliminated jagged cuticles and cut way down on finger damage.

Being familiar with navigation. Vlad is a much better navigator than Johna. But each of us had charts, a GPS, and a compass—and knew how to use them. Each of us ended up with sole responsibility for navigation at least once, while the other suffered from disorientation. In any case—unlike some others who got lost, even in one legendary case paddling for many miles up the wrong river before realizing it—we made no significant navigational errors during the challenge.

We have good current with us as we leave Everglades City and head down Indian Key Pass, one of the places where the current really mattered

Less food and water. After our shakedown trips, we were a lot less concerned with running out of water. We’d found that we could carry over a week’s supply of water if we needed to. But we didn’t need to, since we also knew exactly where we could fill up. Since there were places to fill up at every checkpoint, we carried just 3 days’ worth of water. We also cut way down on the amount of food we carried. We still had food left at the end, so we still probably carried too much, but it was considerably less than on the previous trips.

Great gear. In addition to the gear we love, we found the following invaluable:

Sun protection. Vlad is very susceptible to sunburn—even in New York, even in winter, even with sunblock, a single day on the water will do it. It was particularly bad, almost disabling, during our 2012 circumnavigation of Long Island. But each successive Florida trip has brought the problem more under control, and now, during the Everglades Challenge, he had no problem at all. Of course, that’s because he’s learned, the hard way, to paddle covered from head to toe, and apply sunscreen often. Particularly valuable have been lightweight sunproof gloves for the hands, which Johna also wears. Unfortunately, they are fingerless gloves, and over a number of days sunburn blisters still form on the backs of the fingertips, making reaching into any confined space such as a drybag very painful. Full-fingered gloves next time? 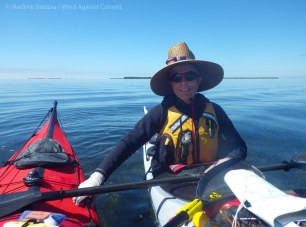 Johna, of course, has her goofy hat that provides plenty of shade—she’s even stopped putting on sunscreen.

We were often forced to paddle in bug nets, among the mangroves and even in the open Gulf

Bug nets. Absolutely necessary, as we’d learned during the shakedown trips. Combined with our wetsuits and paddle jackets, we had nearly bulletproof bug protection. Except in one instance. Sleeping for several hours in the long grass at Flamingo might not have been such a good idea. After the race Vlad discovered that he was covered in insect bites in places mosquitoes could never have reached… Witch hazel to the rescue!

Redundant spares. Johna managed to drop her stash of AA batteries—which powered our GPS, among other devices—into the water on the first night. Fortunately, that was just stash one of three: She had a backup stash, and a backup-backup stash, stored in different waterproof drybags. Similarly, we had a backup GPS (making 3 in total) and multiple backup headlamps.

What didn’t work so well

We underestimated the impact of cold. Vlad wished he’d brought a drysuit. Johna was happy with her wetsuit, but still questions her choice of a sleeping bag liner in place of her 3-season sleeping bag (the liner was way too cold in Tampa, although just right in the ‘Glades).

Also, we learned the importance of dressing for cold before we needed to. The first night we waited until after dark to put on our gear, and as a result we got very cold—something we compounded by failing to stop and make hot coffee. In subsequent nights, we made a point of putting on our gear before the sun went down. This meant we were occasionally overdressed, but as the old adage has it, it’s much easier to stay warm than to get warm. 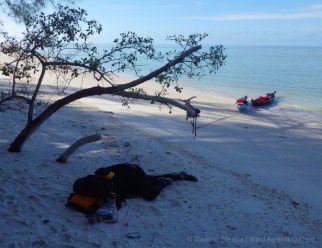 We underestimated the cumulative impact of sleep deprivation. We’re both good at going without sleep, but by the fifth day it caught up with us with a vengeance. It caused us to slow way down—at some points, we were only making one knot. And it also contributed to hypothermia, particularly in Vlad’s case. In retrospect, we should have planned for at least one more full night’s sleep than we had.

As another WaterTriber put it, “When crossing the Everglades, reserve one more chickee than you think you’ll need.” Specifically, in Segment 5 of the race we should have booked the Joe River Chickee, and not counted on making it all the way from Highland Beach to Flamingo, particularly when we knew that a storm front might overtake us.

How will it all fit?

Proper packing and organization.  We’re getting much better, particularly at packing the boats in such a way that what we need is at hand without the need to root around in all the hatches or unload the whole boat. But that’s once we land. On the water, without a day hatch in his boat, Vlad still needs a place to keep accessible, and dry, the fleece and other additional layers he might have to put on if he gets cold. At one time he used to have an under-deck bag for that purpose, and it might be time to return to that arrangement…

We both carried too much in our deck bags, too—causing us to waste precious time rooting around for various items. Not everything has to go in the deck bag!

Equipment failure. If anyone knows of a truly waterproof headlamp, please let us know. Once again, two of our headlamps failed (Princeton Vizz—good on paper, but not recommended). Ugh!

And once again, just like on our shakedown trip in December, Vlad had trouble with his shoes. The Salomon Techamphibian watershoes have sturdy soles, excellent for walking on land and clambering without fear over rocks and oyster bars. But after only a day’s paddling they started to pinch Vlad’s toes, and it got worse day by day as his feet swelled. They also retain sand and bits of shell, which caused agonizing cuts and scrapes. Vlad was forced to take the shoes off in the boat and paddle just in neoprene socks, then struggle to put the shoes on every time we landed. Even though the shoes were new, he left them behind when we left Florida… After two failures with shoes of this kind, he’s going to return to neoprene booties, despite their softer soles, of the kind that Johna wore.

We luxuriate in our tent on Magic Key

Detours.  We made several detours, either for nostalgic reasons, to eat or camp at favorite spots, or in probably over-cautious anticipation of worsening conditions. In retrospect, the cumulative impact of the detours was to slow us down by a day, maybe more. Specifically, if we hadn’t been set on eating dinner on North Captiva Island, or camping at Magic Key, and if we’d persevered against the wind just a bit longer to turn in at Shark River instead of Broad Creek, and not taken the Joe River route, we might well have arrived at Key Largo on Friday afternoon instead of Saturday evening—without paddling any faster. We don’t regret it. For one thing, we wouldn’t have experienced Broad Creek, which, according to those who know both, is worse than the Nightmare :-)

In retrospect, our strategy—albeit not exactly the one that we’d intended—was clear. We paddled slowly, but we made up for it by paddling for a long time. “Just keep the boat moving, and you’ll get there” was one piece of advice we’d heard. And it worked for us, this time.

But if we’d paddled a bit faster—if we’d been a bit more fit—we could have paddled less, and slept more. And that would have allowed us to paddle faster the next day… Instead, the opposite happened. We paddled longer and slept less, and so paddled even more slowly, and even longer, the next day. Part of the problem was that we couldn’t do any on-water training for the two months before the race because of ice in New York Harbor.

But it’s all good experience for the next Challenge…

Goodbye to Florida, for the time being: Last sunset, at Key Largo the day after the race

Several other WaterTribers have posted their stories and photos, and described what worked for them and what didn’t, in the 2014 Everglades Challenge (usually the link is just to the first post of a series):

And there are many other fascinating and instructive stories from previous years, and from other WaterTribe challenges, in the Magazine and Discussion Forums on the WaterTribe site.

46 responses to “Everglades Challenge, Reflections: What Worked, What Didn’t”