Johna and I try to go out for a longish paddle every weekend. We don’t always succeed, but we succeed often enough that a backlog of trips that we have yet to post is accumulating.

Here’s one from early November. It’s strange now, in January, to see ourselves in these photos paddling without drysuits, and with leaves still on the trees…

Sunday, November 6, 2011. Early in the morning, we checked the Statue of Liberty webcams for harbor conditions. In the pink dawn light, the harbor looked calm and peaceful.

A couple of hours later, we launched from Pier 40 on the West Side of Manhattan. 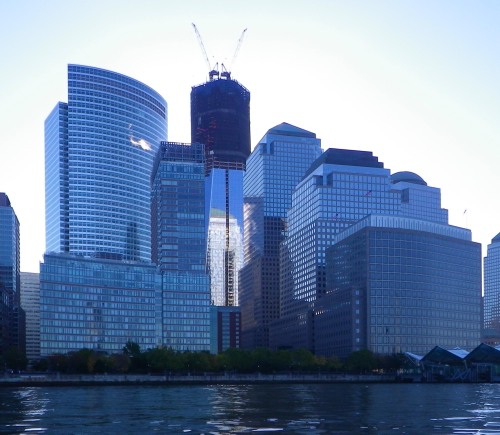 Paddling past the site of the World Trade Center as we do pretty much every week, we are always interested to see how far the rebuilding of the complex has advanced, and how it appears in that day’s light… On this day it was blue and white.

Farther down the harbor, I couldn’t help taking the obligatory photo of the Staten Island Ferry passing the Statue of Liberty.

Then we paddled along the Bay Ridge Flats… 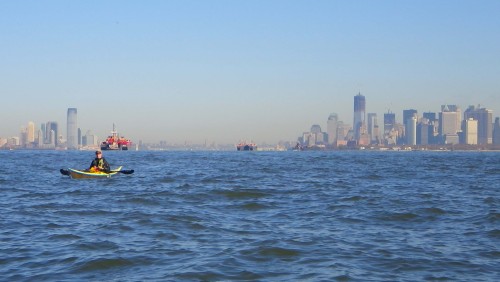 … and approaching the Verrazano Narrows. 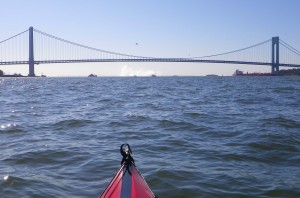 As we neared the Verrazano-Narrows Bridge, we were excited to see a welcoming committee—fireboats, spouting graceful arcs of colored water, and helicopters—awaiting us!

Never mind—the welcoming committee was much more interested in the runners of the New York City Marathon, which we had completely forgotten about, just at that moment passing over the bridge…

South of the bridge, the broad waters of the Lower Bay opened up, with Sandy Hook, tiny but already visible—by no means always the case!—low on the horizon. 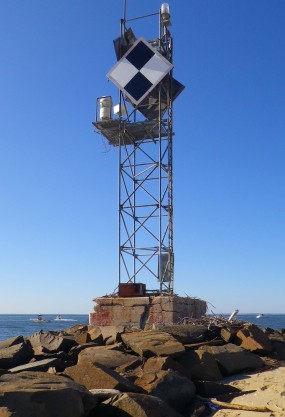 On Sandy Hook, we ate our lunchtime sandwiches in the brilliant blue sunshine, while we watched a huge ship pass just a stone’s throw offshore through the Sandy Hook Channel.

Then it was time to paddle back. We made our way back across Romer Shoal, where, as often happens, we encountered some swell coming in from the open Atlantic…

… and gradually back to the Verrazano Narrows.

By now it was that time in the late afternoon when the sun, low on the western horizon, briefly brings out the most intense colors… A white moon was high in the darkening blue sky.

Back in the Upper Bay, we turned the corner of Bay Ridge just in time to see the vista of Manhattan, spread out in front of us, bathed in sunset light, first pink and lavender…

… before finally fading to gray as we made our way home. 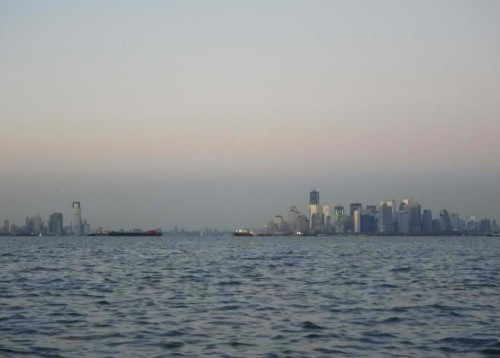