There’s an old saying, variously applied to pilots, Marines, race-car drivers, and other professional risk-takers: “There are old pilots. There are bold pilots. But there are no old, bold pilots.”

I was thinking of this as I swam my daily laps today, in the company of a woman who’d taken up aquatics after two hip replacements—which she attributed to 30 years of aerobics. She pointed out that Jane Fonda (aka aerobics queen) had to get both her hip and knee replaced.

And many runners have had to give up their beloved sport due to joint damage from years of pounding. Then there are the activities that are almost exclusively the province of the under-30 folks: Gymnastics. Professional dance. Skateboarding.

The message is that the world is full of things that you can’t do wholeheartedly for your whole life: You can’t be old and bold.

That got me to thinking: Kayaking is one of the few sports where that’s flat-out not true. Sure, whitewater appeals to younger athletes. But sea kayakers are at least as likely to be middle-aged or older.

Usually we complain about this. Sea kayakers bemoan the fact that our sport appears to be dominated by the middle-aged—maybe because that reminds us that we’re no longer the young hipsters.

But you know what? I like the fact we sea kayakers can be old and bold.

How bold? Well, the races I’ve paddled in don’t have age classes–just boat classes. And the guy who regularly wins the fastest, most competitive category turned 70 a few years ago (we think). At any rate, he got a lot faster after he retired.

Yep, you got that right—this guy routinely trounces 25-year olds.

And he’s not unusual. Older kayakers routinely show the young ‘uns up with feats of endurance and athleticism. And my dad, a natural athlete, kayaked until the last year of his life—when he was 79.

Kayaking is one of those rare sports in which technique and endurance are more important than strength and explosive power—which means you can keep getting better and better as you age.

In sum: There are plenty of old, bold kayakers. I aspire to be one! 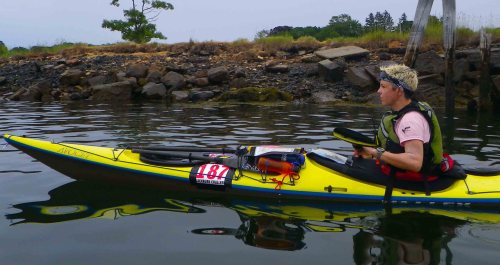 Preparing to be bold (at the 2011 Blackburn Challenge)… and those are NOT white hairs, yet!

Like Loading...
This entry was posted in Kayaking, Life and tagged Age, Bold, Kayaking, Old, Sports. Bookmark the permalink.