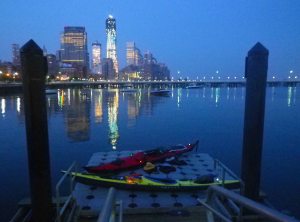 .
(click on photos to expand them—they look a lot better when they’re BIGGER!) 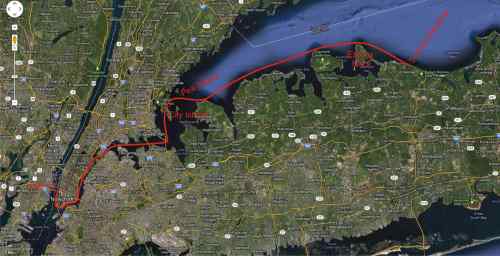 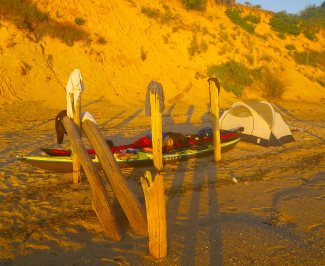 Our campsite at High Water Beach…

I slept wonderfully that night on High Water Beach, despite the risk of being flooded out in the middle of the night by the high tide. Knowing the boats were secured, and that Vlad was checking on them, made it easy for me to sleep.

Vlad wasn’t so lucky—between general restlessness and checking on the boats, he got only a couple hours of sleep.

In the morning, all the signs were that the water had indeed come very close to us. But we were still dry.

… is lit up by the rising sun

Even the laundry has dried a bit overnight…

As we packed up, we discussed where to camp that night. If we made it as far as we hoped, we could spend the night on one of the little islands that dot the western end of Long Island Sound. We had a particular island in mind, in fact. Then we would have just a short paddle home tomorrow.

The drawback of that plan, as Vlad pointed out, was that tomorrow there would be no point in arriving at Throgs Neck, at the entrance to the East River, before about 1 PM—before that we would be fighting, rather than riding home, the strong East River current. But the islands were only about an hour or two from Throgs Neck.  So we’d be, in essence, spending a full extra day, and camping an extra night, just to paddle a few hours.

So if we made it to the islands by this evening, why not just keep going for those few hours? That meant being at Throgs Neck at 1 AM rather than 1 PM—and paddling all night. But we’d done that before. It’s actually incredibly peaceful to paddle at night—there’s almost no traffic. And it was likely to be a beautiful night: The moon was waning gibbous (nearly full) and today and tomorrow were predicted to be perfectly clear.

We finally decided to play it by ear. We’d see how far we got, and make our decision at sundown.

And so we set off, on what we suddenly realized might be the final leg of our journey.

We said goodbye to High Water Beach, and the fishermen who had spent the night on it next to us, and paddled off down the Sound. 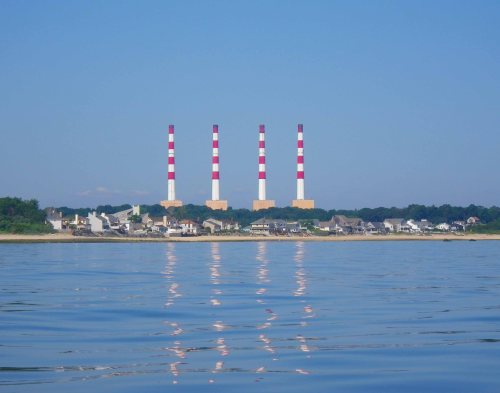 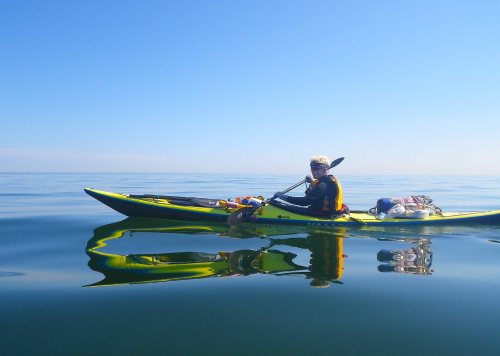 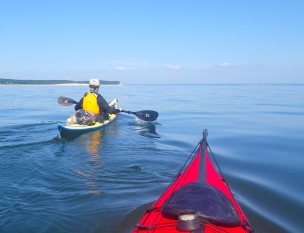 We had some current with us at first, and the wind against us was light. For the first few hours, that was delightful. But then the sun rose higher, and it got hotter.

We began to pray for wind—even against us.

But there is not even a hint of a breeze…

Vlad was yawning, both from lack of sleep and from the heat.  (Heat is about the only thing that bothers him.) I wasn’t doing too badly, but we both had to keep splashing ourselves. Normally, I’d do a bow dip—or even better, a roll—but I had a bag of garbage lashed to my deck, and I really didn’t want to flood it with water. So we had to be content with splashing ourselves (and occasionally, each other).

Without even discussing it, we didn’t land for lunch. Instead, we rafted up and shared some sausages and cheese that I’d stowed in my day hatch. We didn’t want to do anything that might interfere with the possibility of making it home without having to camp another night… 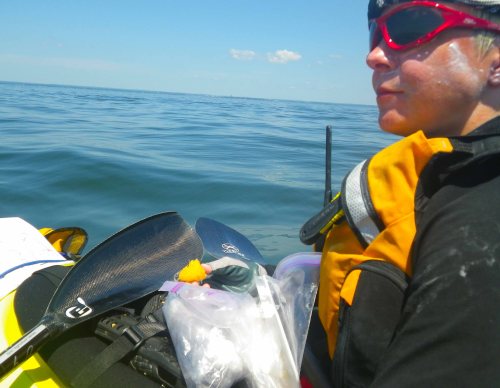 We raft up for lunch, feeling the heat

As we paddled, the land around grew ever more familiar: 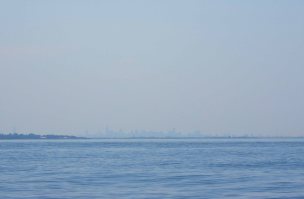 Our first glimpse of New York City, still forty miles away, on the horizon

There was the beach we’d camped on one time, more than a year ago. Oh look! There went a barge—the first one we’d seen since leaving New York Harbor. And what were those distant towers low on the horizon—could that be the city?
.

We kept paddling. And it got hotter. And hotter. We amused ourselves by tracking the buoys—locating them on the chart, then paddling up to them to make sure they were what they were supposed to be. (Actually, this was a training exercise for me, as part of my preparation for the 3* exam in the fall.) Anything to keep awake!

By about 3 PM Vlad looked so downcast from the heat that I worried about heatstroke. We kept splashing ourselves with water, but it wasn’t enough.

So that’s what we did. When we arrived, at 5 PM, a light wind had come up and it had started to cool down.

Nonetheless, I floated around in the water wearing my PFD. The water was cold, and amazingly refreshing. When I got back into the boat I felt ready for another day’s worth of paddling—which was a good thing, since that might just be in the cards.

It was time for us to decide. Were we going to go for it, or camp one more night?

We decided to go for it. But now we had the opposite problem. It wouldn’t do us any good to arrive at Throgs Neck much before midnight—the East River current would be against us until then. We were maybe only a couple of hours away. What to do with the remaining time?

“Why not stop and have dinner at City Island?” I suggested. City Island is the westernmost island in Long Island Sound, already within the boundaries of New York City. It’s a little maritime community, featuring (among other things) a couple of “dock and dine” restaurants. There we would be able to fortify ourselves with a warm meal (and a few cups of coffee) while waiting out the time before the East River current changed.

So we agreed: Dinner at City Island, then a midnight paddle home. 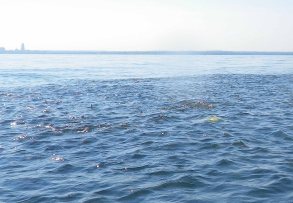 Vast schools of fish, their fins sticking out, agitate the water

The tide was very low as we paddled across the shipping channel just west of Execution Rocks Light. We passed through fields of rocks that we had never seen so exposed before. And in patches all around, the water boiled with vast schools of fish, darting just under the surface, oblivious to our presence.

We paddle through the rocks off Pea Island, in the background—the island that we originally planned to camp on

Yet again, we arrived at our destination just as the sun was setting. There are two “dock and dine” restaurants at the northern tip of City Island, and we hesitated for a while, trying to decide which one to make for. Finally we went for JoJo’s City Island Lobster House. We’d already been to the other place, and JoJo’s seemed more lively.

Our little kayaks docked at JoJo’s at sunset

We tied the kayaks up to the dock bow and stern, using dock lines I’d bought on impulse from Amazon before the trip (see Long Island Kayak Circumnavigation: Postscript—Lessons Learned, forthcoming). We were a bit concerned about leaving the boats in the water, bouncing in each passing wake—but they were far too heavy to lift onto the dock. 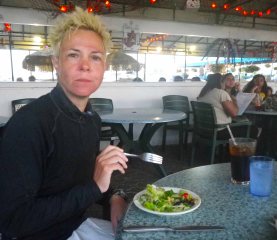 Our last dinner of the trip at JoJo’s

We didn’t get a seat by the water, but that was okay—we’d had plenty of waterfront views. The hardworking staff brought us a lobster apiece, plus appetizers and salads. And then coffee: Two double espressos each! We would be sure to be awake for the last leg of the trip.

The moon was struggling to break free from the clouds, but above there were stars. We made it to the Throgs Neck Bridge by 11:30 PM. We’d timed things perfectly: The current was just slack.

We turned and began to paddle down the East River.

The rest of that night swirls around my memory in a series of dreamy kaleidoscopic flashes. The moon came out, painting the black water with silver. We approached the familiar landmarks one by one: The Bronx-Whitestone Bridge. LaGuardia Airport. The decaying garbage transfer station. Rikers Island.

At North Brother Island, Vlad caught sight of a barge. My radio was on (the battery remarkably having stayed charged throughout the preceding nine days), and I heard the captain announce that he was planning to “round the brothers and head out”. So we knew which way the barge was headed, and were able to stay out of its way.

Then we were approaching Hell Gate Bridge—my favorite New York bridge. The current had been growing as we paddled, and we were making our way down the river at maybe six or seven knots. (At full speed, you can get up to eight or nine knots in Hell Gate). As always, the water was boiling with whirlpools and eddies, and our boats were tossed this way and that.

But we made it through without incident. Then out to Mill Rock, and a hard left to head down the river between Roosevelt Island and Manhattan.

We drifted down the East River, mostly just carried by the current, now and again spun around by an unseen eddy in the black water, looking at the lighted silhouettes of buildings in the city.

At the tip of Roosevelt Island is a tiny rock named U Thant Island (after the second Secretary-General of the UN). Cormorants roost there, and earlier in the season we’d seen the baby birds in nests.

As we drifted close to the island, we were treated to an incredible sight: In the soft glow of the moonlight and the city lights, there were dozens and dozens of the birds, both in their nests and standing on the ground—motionless. Completely asleep.

“Look at that!” we whispered to each other. “Do you see?” We paddled stealthily closer to the island, not wanting to wake the birds, before drifting past.

The East River bridges in sight

Then it was on to the three Lower East River bridges: Williamsburg, Manhattan, Brooklyn (my mnemonic for remembering them is BMW, south to north).

Except for the rushing current in the dark water, all is still at 3 AM as we pass under the Manhattan and Brooklyn Bridges

And suddenly we were at the Battery.

The big challenge now was, to paddle the last mile or so up the Hudson to Pier 40 against the current. The same strong current that had been propelling us would now be against us. Could we make it?

It was slow going, but by keeping close to the seawall, we were able to make reasonable headway—a knot or two. At the ferry terminal above North Cove we took the calculated risk of squeezing through the gap between the floating terminal and the seawall—something you’re not supposed to do. But the water was low, and we could see the metal spikes and hanging cables that threaten the unwary there pretty clearly.

And at long last, we were in sight of the Holland Tunnel ventilation shaft that marks Pier 40.

It was 4:30 AM. The air was just beginning to lighten, and the birds to awaken.

And we paddled into Pier 40 nine days and 22 hours after we had left.