The goal of our Everglades Shakedown Expedition of December 2013 was to gain an understanding of the Everglades environment for the upcoming WaterTribe Everglades Challenge, and we’re happy to say it succeeded. Our biggest lesson learned was that we’d largely been worried about the wrong things. Snakes and crocs? No worries, mate! But midges and skeeters can be more than a nuisance—they can derail your trip by keeping you penned in your tent, unable to cook or pee.

Similarly, I’d been deeply concerned about paddling in the Everglades at night. It’s pitch-black (actually, not quite: the lights of Miami loom on the horizon) and the thousands of mangrove islands look all the same. Sure, we do plenty of nighttime paddling in New York—but that is our backyard, and even if you are a visiting paddler, the city is well-illuminated and chock full of landmarks, from the Statue of Liberty to the various bridges, so it’s fairly easy to keep your bearings. Turns out that with a compass and charts, a good flashlight, and ideally a mapping GPS, nighttime paddling in the Everglades is very much doable, as well. (And in some respects, it’s more pleasant than daytime paddling.) That relieved my worry about being limited to paddling only during the daylight hours in the Everglades Challenge itself.

And some things that seemed trivial from our perch in New York were not trivial at all. Headwinds across the shallow water that abounds in the Everglades generated chop and slowed us down considerably—our average pace for the trip was 2.3 knots, and that’s with fast boats and good technique. (Our standard average, in calm waters with no wind or current, is around 3.4 knots.)

Here are some of the highlights of what we learned:

When it comes to scary critters, danger is inversely proportional to size. We’d worried (okay, I’d worried) about poisonous snakes and scorpions. I’ve lived in Florida before, so I wasn’t much afraid of alligators (and as it turns out, they’re more scared of kayaks than we are of them).  We didn’t see a single snake or scorpion, and only one alligator.

But the mosquitoes and midges can be showstopping. Hat, gloves, bug net, paddle pants, and paddle jacket are a must—in addition to DEET. And the waters are teeming with microbial life, which can turn a tiny cut into a painful infection. (Neosporin is your friend.) 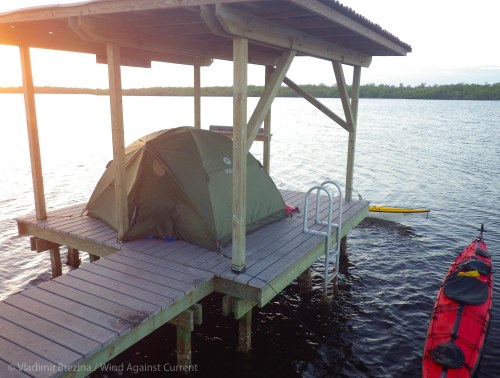 Our camp on a chickee

Virtually all the “paddling in the Everglades” guidebooks feature cheerful photos of kayaks hoisted up neatly on the chickee, next to the tent.

One problem: that only works if your boat is very light, or lightly loaded, because the chickee usually stands several feet above the water. Try leaning off the edge of the chickee to hoist up a 60-pound boat loaded with 150 pounds or more of food, water, and gear. You see the issue! (And if two of you try to hoist the heavily-l0aded boat by the bow and the stern, even if you had the strength, you might well break it.) You can, of course, tie up your boat and leave it in the water (which we did). But that means loading and unloading the boat either from the water, or standing on the ladder up to the chickee. It’s doable, but consumes precious time and energy—so much so that we’ll try to avoid chickees during the Everglades Challenge itself.

Gear is good.  In preparation for this trip, we upgraded our gear substantially. I bought a suite of Watershed drybags—top-of-the line bags made by a company that supplies, among others, the US Military. Expensive? Oh yeah. And worth every penny. For the first time ever on an expedition, my “indoor” clothes and bedding stayed dry. I can’t recommend Watershed enough (and a shout-out to Danny at New York Kayak Company, who recommended them.) Both New York Kayak Company and Sweetwater Kayaks stock them. (I have no affiliation with Watershed, or any other company mentioned here by name, other than being a delighted customer.) 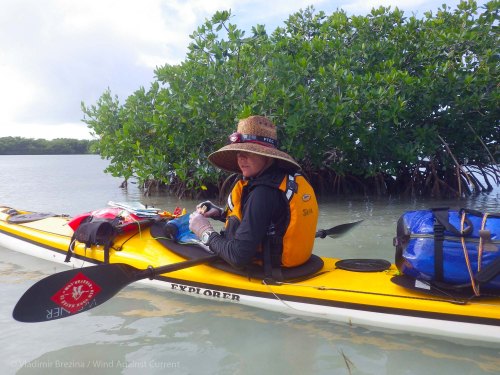 On the last day, the blue Watershed bag on Johna’s rear deck is still dry!

It’s all about the organization. For previous expeditions, we’d packed things wherever they fit best. This had two flaws: First, we ended up packing far more than we needed. (For months after the Long Island Circumnavigation, we kept eating vacuum-packed salmon that we brought back, which we ended up referring to as “Long Island Salmon”.) Second, that made it impossible to locate things quickly, and we spent literally hours rooting through stuff.

This time, we kept related gear together (the cookware, condiments, and coffee all stayed with the JetBoil). We organized meals by day, and stashed later days in less-accessible parts of the boats. And I color-coded everything, so I knew (for instance) that the brown bag was clothes, the red bag cookware, etc. This made for less efficient use of space, but much more efficient use of time.

Backup, backup, backup. Once again, a GPS failed on us (that makes three out of five, over the course of four expeditions).  Fortunately, we each had one, so we finished the trip with a working GPS.  But we’ve learned over the years that if an item’s important, carry two, or more, of it. For the Challenge itself, we’re planning to bring a GPS each, plus at least one backup. In addition, we carried a “backup bag” of other spares, stored in a less-accessible part of the boat, as well as several separate stashes of batteries—it’s a good idea to keep anything essential in multiple places so that if something happens to one, the others remain available.

Next in Everglades Shakedown —>