So There I Was… In Maine

Every good kayaking story starts with “So there I was,” according to Carl Ladd (of Osprey Sea Kayak fame). In keeping with that adage, here goes: 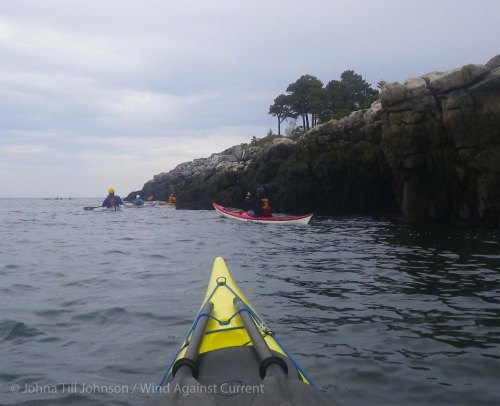 Setting off along the Maine coast

So there I was, bobbing up and down on the frigid waves crashing into the rocky coastline of Maine’s Sheepscot Bay.  The swells were substantial—four to six feet, big enough to rip someone from her kayak and deposit her and the boat on separate rocks.

That exact thing had recently happened, in fact, to another paddler.

Fortunately neither she nor her boat sustained damage, but it was a strikingly close call. One moment she was riding the surf, high over our heads, after a larger-than-usual wave broke suddenly. The next moment she was struggling in the water, and we all winced as we heard the hollow sound of her fiberglass boat crunch into the rocky shore.

John Carmody, our head coach and guiding light, engineered a dramatic rescue along with fellow coach Carl Ladd, while the rest of us watched and learned. Mostly we learned what the sea could do to an unwary, or unlucky, paddler.

That had been a few hours ago, and we’d made our way slowly down the coast, venturing into rock crevices and balancing on the waves that boiled against the rocks. 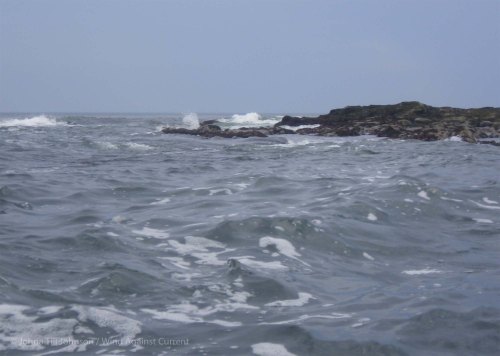 Except all of a sudden, John Carmody was missing.

So there I was… and there John Carmody was not.

Someone had just located his empty kayak. And John himself was nowhere to be seen.

My first thought was, “This has to be some sort of a test. John’s a coach. Nothing could have happened to him!”

My second thought: “But it could be for real.” There’s no law that says accidents only happen to inexperienced kayakers. Even the most experienced—even coaches—occasionally get caught. And the conditions were such that a wild-card accident could have occurred. 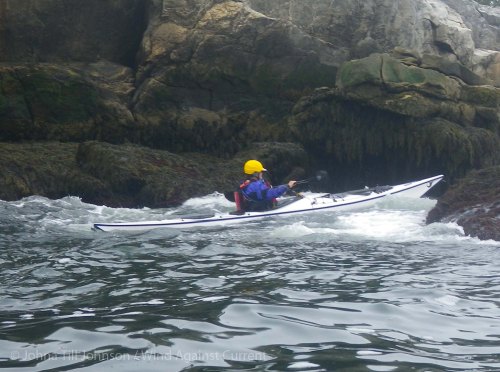 To experience those conditions was the primary reason I was in Maine. The secondary one: Curiosity. From everything I’d heard previously, Maine sounded like a place to avoid.

Vlad had been suggesting for years that we needed to paddle there. And even non-paddlers  would sigh rapturously at the very thought of the place: “Maine? You’re going to Maine? I looove Maine!”

So I’d ask: Doesn’t it have rocks, lots of them? Yep. And it’s foggy? Sure. And there’s wild surf? And it’s very cold? And there are miles and miles and miles and miles of coast with nothing but pine trees? Uninhabited islands? Thirty-foot tides? Yes, yes, yes—the answers were always the same. “And you want to go there….why, exactly?”

I never could get a straight answer to that one.  Apparently the lure was all of those things in combination, which I couldn’t really see.

Don’t get me wrong—I like conditions, and I like mastering new skills. (And I’ve got nothing against rocks and pine trees, though I find them monotonous after the first few thousand. Cargo ships and working docks are a bit more my style.)

But it seems to me that if you’re going to go out and learn to deal with, say, surf,  it’s infinitely smarter to do that in an environment where hypothermia isn’t also an omnipresent risk.

My NYC coach, Taino, likes to talk about risks using a slot machine metaphor: One risk might be the cold. Another, the darkness. A third, wind. A fourth, hidden rocks. And so on. When you get a perfect line-up of risks, your chances of a negative outcome increase substantially. And Maine had all those risks, ready-made.

Which is why I couldn’t rule out the possibility of John having being caught up in a freak accident.

But let me back up.

We were at the end of the third and final day of John Carmody’s Maine symposium. We were all experienced paddlers—three-star equivalent or above—plus several coaches. Our friend Julie McCoy came with us from New York—you can read about her exploits in her blog Kayak Cowgirl. (Vlad was there too, though he took solo day trips instead of participating in the symposium.)

We’d taken a collective break from our busy lives and driven from places as far afield as New York City and Ontario to spend three days in an isolated cabin on the Maine coast to improve our paddling skills.

Actually, we spent just mealtimes in the cabin, which had no running water and only solar-powered electricity. Most of us slept in tents on the cabin property,  but it was a luxurious sort of camping.  After a week of commando camping in the Florida Everglades, I found the clean, cedar-scented composting outhouses and hand-pumped cold, sweet water to be four-star perks.

And cooking collectively, we’d been able to whip up gourmet meals including salad, hors d’oeuvres, entrees, and dessert.

But we weren’t there to cook. We were there to learn, and learn we did. We’d spent the previous days learning to read, and maneuver our boats in, currents and various forms of moving water. We’d practiced surfing and done rock-gardening. We’d navigated (from charts and on the water) and reviewed weather forecasting.

And we’d deconstructed our rolling techniques using Carl’s unique “dehydrated roll” approach: We went through the motions of the roll on dry land, taking each component one at a time. (We called it a “dehydrated roll” because you just add water… and there’s your roll!) 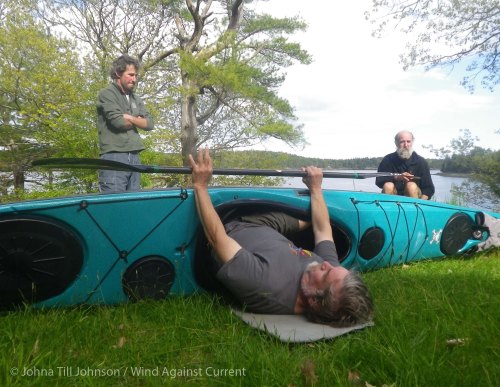 Step One: John demonstrates the setup… 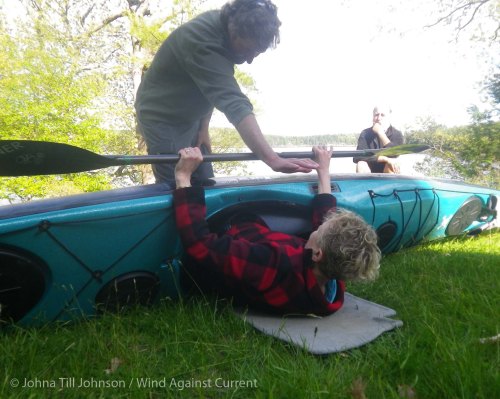 Step Two: Cat shows how to try to touch Carl’s hand with your nose… 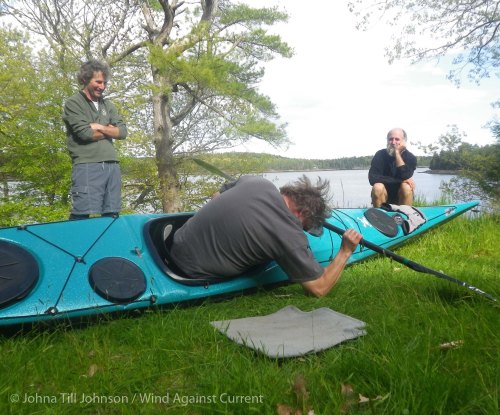 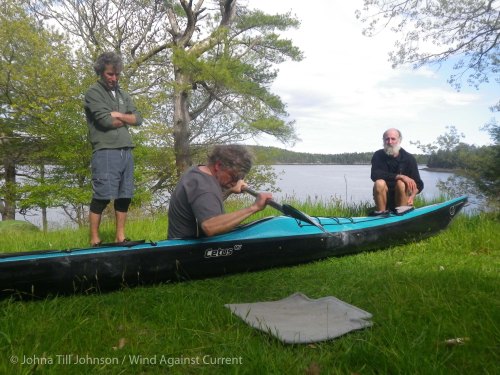 The first morning, I managed to do exactly what I’d feared most: I capsized in a fierce eddy in a spot called Lower Hell Gate. Having paddled less than a week before through the swirling whirlpools and 5-knot currents of New York’s Hell Gate,  I can confidently say that there’s nothing lesser about Maine’s Lower Hell Gate. Although it’s smaller in scope, it’s no less fierce than its New York counterpart!

And there I was, submerged in it. The water temperature was in the 40s, but I was surprised not to feel cold. I set up my roll, swung the paddle around… and made it just far enough to grab a gulp of air before falling back in. One more time… and this time, I made it upright.

I popped up pleased and somewhat startled—and discovered that nobody had even noticed! Everyone else was too busy playing in the eddy—and going over. There were plenty of wet exits and rescues, but  far fewer successful rolls. Later on, someone would tease me about not having gone in… and express surprise that I’d been able to roll my way out.

I learned something useful that day. The reason I’d gone in was that I’d done what I thought was the right thing, and edged into the current. (Plenty of other folks did the same thing.) Turns out that’s exactly the wrong thing to do: You want to “moon the current” by edging away. That drives the water under the bottom of your boat, and lifts you up rather than sucking you under.

This was one of the most valuable lessons I picked up during the symposium. I  later learned it applied to waves as well. Normally, you’re taught to edge into the wave, and brace along with the edge. That does work, but it gives the wave the ability to grab you and spin you downstream, then carry you along with it. That’s not always a bad thing—if you’re in open water, the only harm is that you might end up somewhere you don’t want to be. 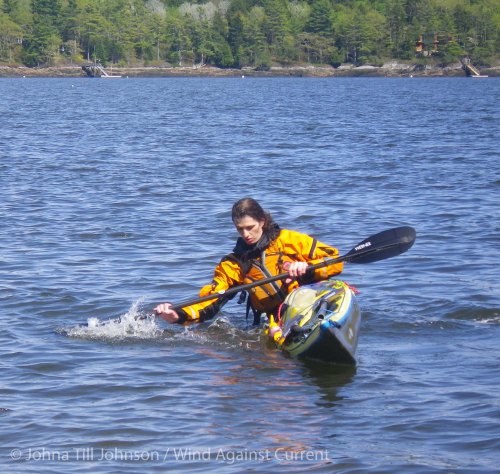 Julie adds a flourish to her great edge….

But if the wave is crashing into rocks, you might end up crashing into those rocks right along with it—exactly what happened to our unlucky paddler.

A better approach is to edge away from the wave—to “moon the wave”, in other words—and turn your boat so you carve right into the wave. This allows you to go up and over the wave, and avoid the rocks.

It doesn’t work if the wave is particularly powerful, though. You  need to make a judgment call about how strong the wave is, and how close it is to breaking, before you decide what to do.

In fact, that approach wouldn’t have helped our unlucky paddler. Nothing really would have—the wave that grabbed her was simply too strong. She didn’t even have time to roll, she said when I asked her later. One second she was thinking about it, the next second she was literally ripped out of her boat—she never even had time to pull the tab on her spray skirt.

Mooning the current, and mooning the wave, turned out to be very useful tools. I used them both later—including to climb up the face of a wave that was big enough that, as Carl put it later, “That one would’ve et ya.”

Could that have been what happened to John? Had a wave “et” him?

We fanned out in a search pattern, scanning the ocean and the rocks near the water’s edge. Caroline, one of the coaches, climbed onto the cliffs to get a better vantage point for the search.

The tide was going out, I thought to myself. If John had been knocked unconscious and sucked out of his boat, he’d be floating towards the horizon. So I kept scanning the gray-blue waters for signs of his black-clad body.

Part of me was unemotional, dispassionate. We needed to think about where he might be, and do what we could to find him.

But another part was quietly freaking out: I’d briefly met his wife, who seemed to combine grace and strength in equal parts. How could she handle losing him? And what about us? A world without John Carmody seemed dimmer, grayer, less full of potential.

Suddenly I heard a shout, and turned around. There stood John Carmody, paddle beside him like a staff, standing on the rocks, laughing at us. 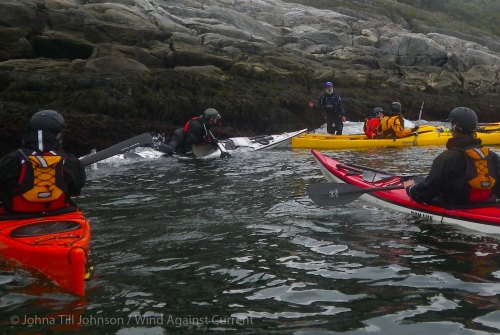 It was as if the sun had come out of the clouds. (In fact, in my memory, the sun did come out from behind the clouds just then.)  In a few moments both John and Caroline were back in their boats, and we all headed towards the beach, and the end of our session.

What did I learn during my Maine symposium?

Well, I learned about reading the water, and mooning the current. I learned that it’s okay to capsize in cold water, and that I can roll my way out of it, more often than not. I got some good ideas about what features I want in my next drysuit, and I’ve stopped being irrationally afraid of capsizing in cold water, just because it’s cold.

I learned several useful techniques that I look forward to practicing, particularly when it comes to rolling more effectively.

And I learned that a good edge, forward stroke, and sweep stroke should be enough to handle most situations (but the operative word is good). Corrective strokes are fine—and you should know how and when to use them—but you should think of them as tools you apply when your fundamentals have failed you. (John Carmody once yelled at me for using a bow rudder when we were practicing hugging the coastline—I should have been able to make the turn using just an edge.)

I got some ideas for how to pull off a rescue in dangerous waters, though I’m far from being able to do so as flawlessly as John and Carl did.

Vlad and I are already planning our next trip to Maine!