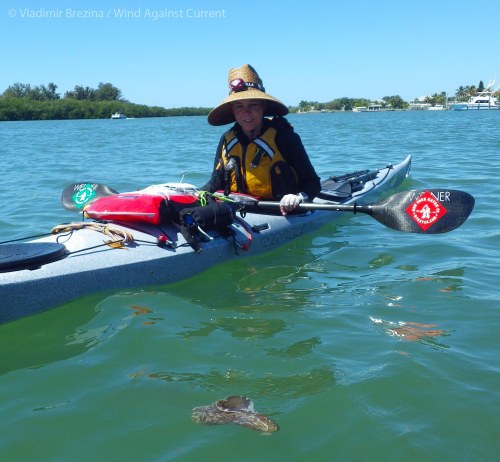 Several times during our recent paddles through Southern Florida, we came across these large squishy creatures, brown with white spots, flapping their wings just under the water’s surface—

How is this connected with the theme of Purple, you may ask? Well, the connection was established as soon as I picked this one up out of the water. It immediately started oozing a dark purple liquid onto my sprayskirt. I hastily put it back into the water.

Actually, I was expecting this (although I wasn’t expecting the animal to be quite this trigger-happy). For this was an Aplysia, a sea-slug commonly known as a sea hare—and, as it happens, one of the experimental animals that we work with in the lab (although we work with a slightly different species). So I am very familiar with its defensive mechanisms. Rather like squid, a disturbed Aplysia releases, along with other secretions, a cloud of defensive ink.

This ink is deep purple—perhaps the most intense purple color I have ever seen. No wonder that such ink (from a different species of mollusc) was in antiquity the basis of a much-prized dye, Tyrian or Imperial Purple.

I don’t have a photo that does the color of the ink justice, so here’s one by another photographer that begins to give some idea—

For much more about Aplysia and its ink, including a video of the ink release, see here.