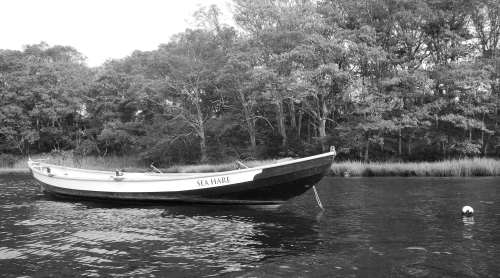 It was a sunny weekend in early autumn. The trees were just beginning to come ablaze, lit by the late morning sun playing peekaboo with fluffy clouds.

I had driven to Osprey Sea Kayak to pick up some paddles I’d ordered, and decided to celebrate with a short trip down the river. Nothing too strenuous; I’d paddle a few hours, turn around, and come back before the tide went fully out.

It was calm, just a hint of wind rippling the surface of the water. As the river unwound ahead of me, I took photo after photo: Scenic New England houses with white trim. A lone tree, a red flame against a wall of green. A cormorant on a wooden dock, sleepy in the sunlight.

For each shot, I tried to think about lighting, composition, and focus. Even as a novice photographer, I was learning to “look where the sun looks”—see what the sun touches, and shoot that.

I passed under a bridge, and there they were: Three wooden boats moored together, bobbing gently in the water. One blue, one black-and-white, and one red, all with traditional “old school” design.

With my blossoming photography skills, I knew they would make a perfect composition to capture the day. But not just yet—they were against the eastern shore of the river, and I wanted the sun in the west, to illuminate them properly.

I made a mental note to take the picture on the return trip, and continued paddling.

My thoughts drifted to Vlad, and all the years he patiently tried to teach me the very basics of kayak photography: Get close to your subject. Steady the boat so the camera will focus. And, oh yes, make sure to keep the lens wiped clean of water droplets!

Now look at me… doing all that, and planning a future shot based on composition and light. He’d have been proud.

But, of course, he was not here.

And suddenly the warm, sunlit river seemed colder, and a bit more drab.

Over the months since he died, I had sometimes felt very close to Vlad, particularly while paddling. But today, for some reason, he felt very far away. I tried talking to him in my mind, as I sometimes did: Where are you? I don’t feel you anywhere.

Like a faint echo came the response: I am with you. I am always with you. You know that!

No, I didn’t know that. What I did know was the power of wishful thinking, and how it can sometimes comfort when everything else is bleak. And I also knew that I was alone on this trip.

I kept paddling, wending my way down the river, and slowly the day began to regain its luster. I took shot after shot of reeds, trees, houses. A sandy beach where a German shepherd trotted briskly, as if on a mission, never once looking back at its trailing owner.

After circumnavigating the small island that marked the midpoint of my trip, I turned back. The sun was sinking low in the west, and I remembered the three boats. Would they still be there? Would the composition be as pretty as I’d hoped? And most importantly: Would my battery, down to its last bit of power, hold out long enough for the shot?

I swung around a curve, and there ahead of me was the little bridge. To the right, the cluster of boats. Some trick of the wind and current had lined them up perfectly, parallel with each other, with a picturesque New England house behind them. The composition had created itself; this picture was just begging me to take it.

And the battery was holding!

Get close to your subject. I paddled up to the boats, raised the camera…

And dropped it again, my eyes blurred with tears. The name of the first boat was Sea Hare.

Vlad’s WaterTribe nickname, chosen for the creatures (Aplysia) he had done his scientific research on.

I could feel Vlad laughing.

And I was laughing, too, and shouting, in between the tears. I never did get the composition… but I ran down the battery taking picture after picture of his namesake.