A Winter Nighttime Paddle on the Hudson 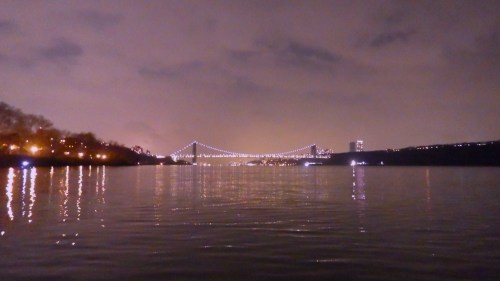 George Washington Bridge from the north

It was to be Brian’s first winter paddle. That is, even though it wasn’t quite winter yet, the air and water temperatures told us it was time to don drysuits—something Brian had never done before.

And thanks to the “supermoon”—a larger-than-usual moon due to the moon’s close orbit to Earth—we’d have king tides, bringing currents of between 2 and 3 knots in the Hudson. That meant an easy paddle in both directions, if we kept with the current. (Currents that strong and stronger are common in the East River, but more typically in the Hudson they range from 1 to 2 knots).

There was just one catch.

To travel with the current in both directions, we had two choices for our launch from Yonkers: A predawn launch heading north to the Tappan Zee bridge, or a midafternoon launch heading south to the George Washington.

Realistically, I couldn’t picture getting up early enough for a pre-dawn launch.

But if we took the latter option, we’d be spending most of the trip in darkness.

Was that really wise?

One of my good friends and coaches, Taino, likes to illustrate kayaking risks with a slot machine metaphor: Each risk may be acceptable individually… but if enough of them line up—disaster.

So what were these risks? Well, it was Brian’s first time paddling in a drysuit. And it was winter paddling (paddling in cold water is always riskier than in warm). And paddling in the dark.

But countering that were the near-perfect conditions (particularly the lack of wind). There was fact that we were two paddlers (two are always better off than one). Also, Brian is a strong paddler, with a level head and good judgment. And we both felt healthy, with no injuries or ailments.

The deciding factor was esthetic: The morning was predicted to be cloudy, with little chance of a beautiful sunrise. But if we opted for the evening paddle, there was at least the chance the clouds would part and we’d get to see the supermoon as it rose.

The evening paddle it was!

Except for one thing…

As Brian pulled on his drysuit (discovering in the process that it fit perfectly), I asked, “So you brought your neoprene booties, right?”

But Brian is nothing if not resourceful. “Got any duct tape?” he asked. I did, along with the cardboard and Sharpie he requested. And in a few minutes, he’d made himself a pair of cardboard-and-duct-tape “sandals”—not super fancy, but enough to protect the soles of his drysuit from damage.

That problem solved, we proceeded to Yonkers, where we managed to launch around 3:30 PM. Manhattan was visible in a haze of pink as the last hour of daylight slowly faded into dusk.

Manhattan in a haze of pink

We paddled on, and arrived at the Spuyten Duyvil swing bridge  guarding the Harlem River just around sunset. We’d previously discussed taking a gander down the Harlem, so in we went. The current was with us, and growing stronger as we went forward.

We had our radios on, as a standard precautionary measure. Suddenly there was a crackle as a tugboat—the Kenny G—announced it wanted to bring a barge through the bridge.

We paddled closer to the southern shore of the Harlem, and I radioed back a message to the captain: “Securité, securité, two kayaks in the Harlem river, we know you’re there and we’re staying close to shore until you pass.”

The captain acknowledged, and we continued down the Harlem with an accelerating current.

Sure enough, the tug and barge soon passed, steaming by at 12-15 kt, or maybe even more.

We paddled on for a few more minutes, but decided that the accelerating current was just a bit too risky. So we crossed over to the north side and paddled back to the bridge, helped along by a healthy back-eddy.

We stopped at the mouth of Harlem, inside the bridge in a protected, mostly still patch of water, to have chocolate and rest. By then it was full dark, but with the lights of Manhattan all around, we could see fairly well. We turned on our deck lights and I donned a headlamp (Brian would do so later on).

When we exited the Harlem, I glanced back over my shoulder, and gasped. “Look, Brian!” I shouted. The clouds had cleared, and the supermoon was rising over the Bronx. 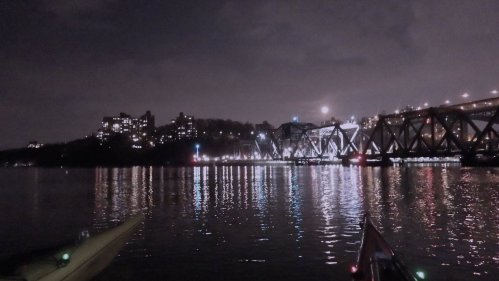 Supermoon rising over the Bronx

I took as many photos as I could, and then we continued south to the George Washington. Rather arbitrarily, we’d chosen the little red lighthouse as our turnaround point.

We arrived at the lighthouse right around 6:30, which was by our calculations right at slack. After several tries, I succeeded in getting a shot of the lighthouse flashing, though I couldn’t convince Brian to get in the picture.

We paddled back in full darkness, glad of the extra visibility provided by our headlamps. True to prediction, the current increased slowly: 0.8 kt, 1.0 kt, 1.2 kt, 1.8 kt.

A conga line of tug-and-barges heading south on our left took us a bit by surprise, as we’d initially thought they were anchored (though there no danger as we were well out of their way). And the moon, by now high in the sky, was visible for most of the way.

We arrived back in Yonkers just past 8 PM, meaning we’d spent about 4.5 hours on the water. We’d paddled 18 statute miles (15.5 nautical miles) at an average pace of 4 mph, or 3.5 kt. –including the time we’d spent enjoying chocolate. The power of the king tides!

All in all… a very successful first winter paddle for Brian. Here’s to many more!

(Note: Regular readers of this blog may be forgiven for wondering who this mysterious “Brian” is. He was formerly one of Vlad’s grad students, and is now a post-doctoral researcher in his own right. He and I have paddled several times this year, though this is the first time I’ve been able to do a writeup. He, his wife Tyna, and I have become quite good friends.)

See slideshow below for more photos. Click on the arrows to move back or forward!

9 responses to “A Winter Nighttime Paddle on the Hudson”