By Johna Till Johnson
Photo composition by Brian Fulton-Howard

Four years ago this month, I wrote about the “New bridge over the Hudson” that was to replace the Tappan Zee. At the time, it was hard to believe the bridge would really be built; the project had been in discussions since 1999. At  $3.9 billion, the new construction would represent one of the largest infrastructure investments in New York this century. And it would be the first new bridge to be constructed since the Verrazano-Narrows in 1964.

A daunting prospect; skepticism was warranted.

Guess what? It’s here! And astonishingly, it was completed on time and on budget, as governor Andrew Cuomo was quick to point out.  The grand opening of the new bridge was last summer (though one span remains to be completed in 2018).

Right after it opened, on a bright summer day, Brian and I paddled up to see it. As we bounced over the slight waves, the twin peaks of the bridge’s profile (a cable-stayed design) slowly emerged from a dusting of clouds.

The profile of the bridge emerges…

… Of course!  It was remarkably similar to the original artist’s rendering, below:

I think the actual bridge is even prettier than the original conception, but it’s hard to say, as it’s still surrounded by the original Tappan Zee, which won’t be torn down until sometime this year.

As Brian and I paddled closer to the bridge, we were struck by the sight of the unfinished span that appeared in cross-section in the middle of the combined infrastructure.

It’s not every day you get to literally see the guts of a bridge as it’s being built, so we struggled to stay stable in the strong flood current as I took shot after shot. Brian finally figured out the exact location from which the unfinished span was framed perfectly (see photo above).

You’ll notice I’ve referred throughout to “the new Tappan Zee” and “the bridge”. The official name of the bridge, as of late last year, is the “Mario Cuomo bridge”, named after the three-term governor (and the current governor’s father). However, there’s a petition circulating to keep the original name.

As the petitioners explain, it’s nothing against Mario Cuomo, who “may be deserving of having something named after him.” (Don’t you love that “may be”?)

I have to give them the point—”the Tappan Zee” sounds way cooler.  I doubt the petition will succeed, but I’m not sure the official name will stick, either. New Yorkers can be stubborn, and  even Google Maps still refers (confusingly to out-of-towners) to the Triboro Bridge rather than its official name of  RFK Bridge.

In any event, with my Tiderace now living happily at the Yonkers Paddling and Rowing Club, I look forward to many more trips to the, ahem, Tappan Zee.

Meantime, here’s a photo of Brian in the sunshine, just to remind everyone that summer will indeed return! 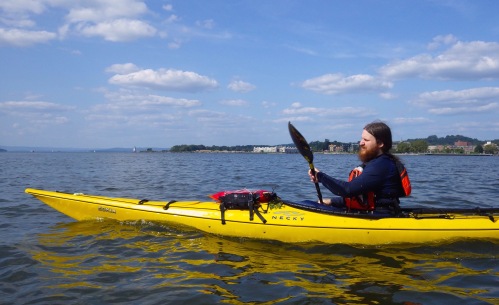