A Wintry Thanksgiving Weekend Paddle on the Hudson

The plan had evolved, as plans sometimes do.

Originally it was supposed to be a 4-day camping trip over the Thanksgiving holiday. But the polar vortex and its single-digit temperatures, plus a lack of preparation, put the kibash on that idea.

Instead: A Saturday paddle launching from Croton Point headed to parts north. (Ultimately, that turned out to be the Cortlandt Yacht Club just south of Verplanck, but that’s getting ahead of the story.) 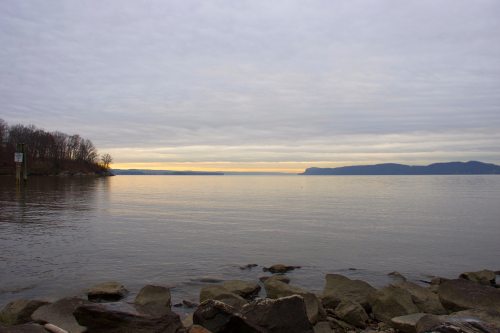 Early in the morning, I drove out to the George’s Island State Park boat ramp and took some photos. Then it was south to Croton Point, which has a lovely little launching beach designed specifically for human-powered boats.

Launch time was 12:15 PM. I meandered up the east side, poking into every nook and cranny. The current was nominally flooding, but flood that far north is fairly weak.

By the George’s Island boat ramp, it was definitely turning to ebb, but I pressed on, curious to see what lay beyond. The chart indicated some sort of marina. And you couldn’t really tell, but it seemed possible to go under a bridge into an inland body of water. 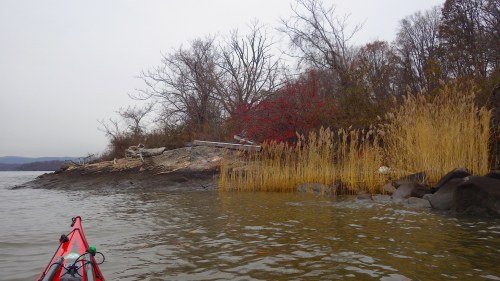 After the long curve of Montrose point, there it was: a complex maze of boats and sea walls, which I later discovered was Cortlandt Yacht Club, Hudson Valley Marine, and Viking Boat Yard. Disappointingly, there was no navigable route to the inland waterway; although there was a low tunnel under the road through which I could glimpse daylight, the sound and sight of roaring water just beyond made me give up any thought of entering it. So I decided instead to have some snacks in preparation for my trip back.

Although many of the boats were put away for winter, there were plenty still in the water. And what a mix! Rusting barges sat cheek-by-jowl with spiffy new yachts. There was a festive yellow boat—whose paint job had seen better days—festooned with tattered flags: The Caribbean Queen. She was far from home, I thought idly as I broke out the food.

To the south, the water shimmered, smooth as glass. The shoreline and tiny island made quivering reflections. All was still.

And then it was time for the return. The current was ebbing fiercely now, so I shot down the middle of the Hudson (keeping a sharp eye out for tug-and-barges, which often travel all the way up to Albany).

I made it back in half the time, nearly overshooting Croton Point, which, like most points, featured a bouncy little tide-rip. Had there been more wind, that part of the paddle would have been positively exciting. But as it was, I rounded the point, then paddled the calm waves gently lapping the beach.

As I landed, I was greeted energetically by two small, fluffy dogs. Their owners (or at least leash-holders) were an elderly couple bundled up against the chill.

The woman, who looked to be in her 90s,  asked if it was possible to walk along the shoreline of Haverstraw Bay.

She wanted to see it, she said. Because of the ghost ships.

She explained: As a girl during World War II, she’d lived on Riverside Drive in Manhattan, with a view out over the Hudson. During the blackouts, the US naval fleet would travel up the Hudson to shelter in Haverstraw Bay.

As she spoke, her words formed images in my mind: A darkened Manhattan. Ships gliding by, as silently as possible. Ghost ships, black silhouettes against the darker darkness of night. Headed for someplace unknowable to a small child. Someplace with a strange, foreign name: Haverstraw Bay. The place she wanted to see.

I felt sad to disappoint her with the news that condos and sea walls blocked the walk along the shoreline, but by then she didn’t seem to mind. It seemed that having someone listen to the story was enough.

“Thank you,” she said, as she, the dogs, and the man prepared to leave. It wasn’t quite clear what she was thanking me for: Listening to her, perhaps? Or just a moment of human connection on a cold, overcast day?

But I was the one who was grateful, to her for passing along a memory that would soon expire, but now would live another lifetime. A secondhand memory, but still real. 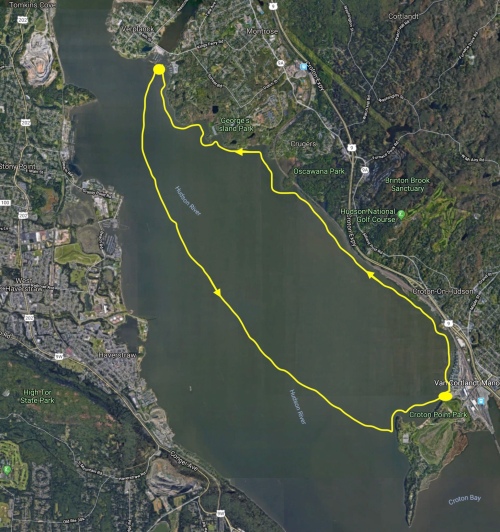 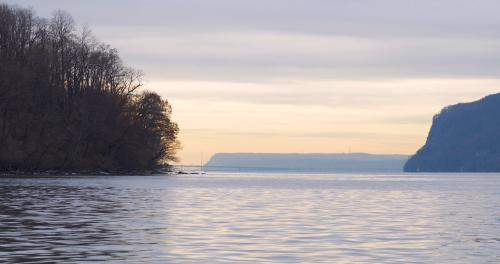 Morning at the Tappan Zee (seen from the north)

Note: I haven’t been able to find anything about the ghost ships of Haverstraw Bay during World War II. If you do, please let me know. I don’t doubt the old lady’s recollection; it was far too vivid for that. But it’s strange that there seems to be no historical record…

18 responses to “A Wintry Thanksgiving Weekend Paddle on the Hudson”