The Blues of Battle Creek

They say to start a story in the middle, so here goes:

The sun was slipping towards the tree-covered hills that lined the dark, navy-blue water. The air was fresh, silent except for the occasional chirping of birds, including the “weep-weep” of the ospreys and the deep grunt of the great blue herons*.

I climbed down the ladder from our trimaran, Christina Rose, and stepped carefully into the cockpit of Sisu, my blue, white, and black surfski. I unclipped the carabiner from the bow line, and pushed off, water lapping gently at my bow.

My immediate destination: a tiny golden spit of beach that jutted out from the trees, about 40 yards away. Over the sound of birds chirping I’d heard voices: an adult and a child, and—was that a dog barking?

Sure enough, it was a young family: Mother, father, little girl and naked baby brother, along with their fluffy dog, Houdini. They’d come across the creek in a gleaming brown wooden rowboat, now pulled safely up onto the dunes.

The baby played in the gentle surf under his mother’s watchful eye as I chatted with the father, who pointed out some good places to explore by boat.

The evening before, my partner V. and I had been to the end of Battle Creek, where the deep-blue waters terminated in a spreading misty-green marsh. Today, we decided to head in the opposite direction, to the Patuxent River, into which Battle Creek fed.

We smiled and waved goodbye to the little family, and set off into the slight chop. As we headed south out into the river, the chop increased. We were going against wind and current; nothing particularly strenuous, but new-ish conditions to us in the surfskis. Moreover, following V’s lead, I’d adjusted my wing paddle to its shortest possible length, with a strong feather angle, and I was still familiarizing myself with how it handled.

So we proceeded carefully, with an eye on the conditions. There was a finger of land extending out the eastern shore into the river. We crossed over to it, and paddled along the edge. Green grass and reeds stood out from clumps of mud; in places the water was only inches deep, but lively and bouncy in the wind. A brisk southwest breeze dusted the waves with white froth.

As we got closer, the apparent “finger of land” dissociated into a string of individual islands, with swift channels between each. We rode the waves through one channel and found a quiet oasis beyond, where the water was barely ruffled.

The shoreline was consistent: Green hills dotted with white, brown, and brick houses, many with wooden steps leading down to a dock or two. 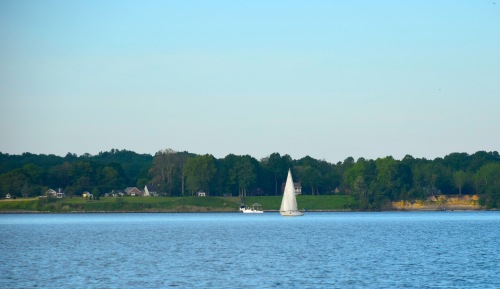 After a bit we turned around and made our way back through the choppy river back into the sheltered creek. The waves slowed, softened, and evened out. The sun was now low. Its slanting rays illuminated the eastern shore and touched the blue sky beyond with radiance.

Blue creek, blue sky, green trees: In its serene beauty, the shore was very different from my usual urban haunts.

We paddled up the eastern shore of the creek, taking the time to explore every cove, inlet, and tiny marina. In each, we admired the boats: A tiny, sleek powerboat creatively named “Ice Box”; a graceful black sailboat lovingly moored in the center of a cluster of pilings. There were clusters of kayaks, canoes, and dinghies, with the occasional Zodiac, but no people (other than the young family we’d encountered at the start). All was strangely still, and peaceful.

Cranes and herons patrolled the shore; V. saw an otter swimming. Osprey calls were ubiquitous. Every now and again we caught sight of a bald eagle wheeling overhead.

After we’d been out about an hour, we turned again and headed back to the Christina Rose. The sun was getting low, and more importantly, we were getting hungry. Back at the boat, a feast of fresh-caught fish awaited us: Earlier that day, V. had caught a catfish and two perch, and made rice and salad as accompaniment.

Within a few minutes we were back at the boat. We lifted the surfskis onto the “wings” of the trimaran and hung our wetsuits to dry on the stays. Then we tucked into our dinner of hot just-fried fish and cold rice and salad, surrounded by the blues of Battle Creek: blue creek, blue river, and deepening blue twilight.

If you’re a regular follower of this blog, this post might leave you with more questions than answers. Who is V.? How did I, a New Yorker, wind up on a river off the Chesapeake Bay in the middle of a coronavirus lockdown? Where did the trimaran come from?

And most importantly… after 12 years committed to sea kayaks, what was I doing paddling a surfski?

All will be revealed, I promise, although it may take a while. I hope you’ll find it entertaining!

* In a previous version of this post, I misidentified a Great Blue Heron as a crane. I actually thought first of a GBH, but didn’t take the thought seriously enough to look it up; for some reason I thought they were too “exotic” for Maryland. My friend Chuck Conley set me straight!