Solo Trip to the Yellow Submarine 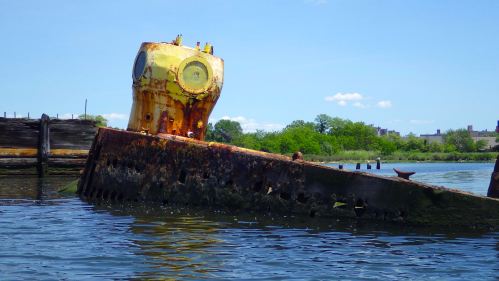 Sky of blue and sea of green….

It’s May 26, 2020, and the world has changed. So I got to wondering what I was up to last year at this time. By good fortune, I have the photographic record: A solo kayak trip to the yellow submarine in Brooklyn, almost a year ago to the day.

I hadn’t been for almost four years; the last trip was with Vlad in October 2015. (Many links to the history of the yellow submarine appear there.)

The 2019 trip marked a milestone for me, though I didn’t really think of it at the time; I’d begun to embrace my new identity as a solo expedition paddler. It’s a longer, more ambitious trip when launching from Pier 84, the home of Manhattan Kayak Company, than it was from New York Kayak at Pier 40. And of course, it’s always more ambitious to go solo. 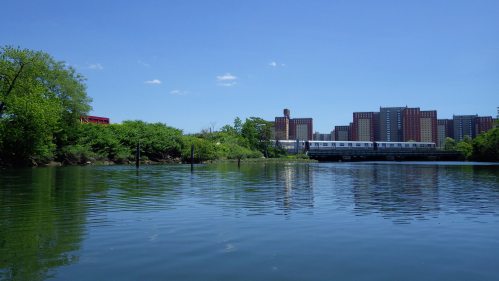 I remember meeting up with a young father and his seven (!) children on the beach at Kaiser Park;  we chatted for a while and I praised his parenting skills… it’s not easy to manage a brood that size, with the smallest in diapers and the oldest burly pre-teens.

Then I continued on down Coney Island Creek; for whatever reason, Vlad and I had never previously explored its full length. It’s a strange combination of bucolic and industrial: Lush greenery sliced through with a subway track, and blocky apartments looming in the background.

The current had turned against me, so it was time to go. The sun was low in the sky as I crossed the anchorage, and the dramatic skylines of Manhattan and Jersey City hove into view.

It seems so long ago now… another world!