Down the Hudson: Hudson to Yonkers-An Auspicious Beginning

Tug and barge near Roger’s Island

I’d just snapped a photo of a sunlit tug-and-barge across the river when I heard the sounds no kayaker ever wants to hear: Thump. Crunch!

Just like that, I’d hit a rock. That “crunch” sound? The rock grinding through the gelcoat outer layer of the kayak.

But there was worse. I was stuck on top of the rock. I tried shifting my weight, no luck. A few paddle strokes to maneuver the boat… and I almost got stuck on another rock.

I sat back and considered my options.

I was near the eastern bank of the Hudson River, about two miles south of the town of Hudson, where I’d put in. This was to be a 100-mile trip from Hudson to Yonkers (one of my home ports).

But not if I couldn’t get off this rock.

I probed the depth of the water with my paddle. Not too bad; maybe 2 feet or so. If I could get out of the boat without damaging it further, I could easily stand.

That was a big if.

The problem with doing anything—maneuvering the boat, shifting my weight, attempting to get out—was that it might damage the boat still further, turning a minor “ding” into an impact on seaworthiness.

Sometimes the best action to take is no action.

The tide was rising. In another little while, it might lift the boat off the rock naturally. As the saying goes: “A rising tide lifts all boats”… even kayaks stuck on rocks. And Vlad and I had successfully deployed that strategy to get unstuck from a mangrove swamp in Florida.

I tried maneuvering again, gently. No luck. Well, I’d give it a bit more time.

I sat back to enjoy the view… and gasped.

Just like that, two paddlers had appeared, out of nowhere, headed upriver. They were Pat and Charles. After a bit of happy small-talk about boats and trips. I said, “Ummm… mind helping me get off this rock?” 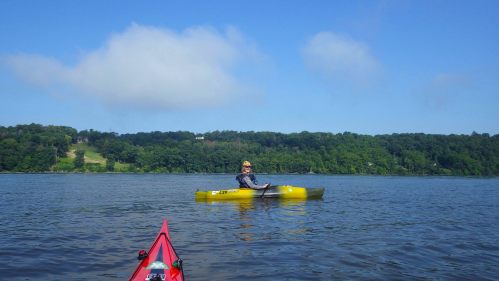 One gentle lift from Charles and I was free!

This was just one of the many serendipitous events that marked this trip, not least of which was the weather: three days of highs in the 80s and lows in the sixties (!) in the midst of our standard steamy July heat. 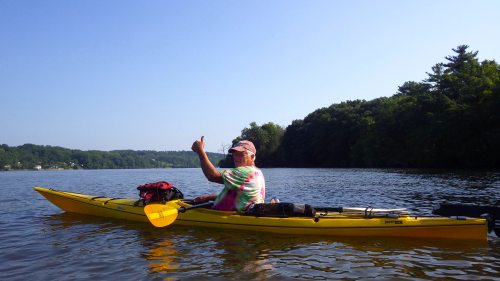 Because of work complexity, I ended up launching a day later than I’d planned. But when I called up the B&B in Hudson to try to sort out my nonrefundable reservation, the owner was not only happy to accept the changes, but he suggested he switch my second night to Monday—giving me ample time for the trip. (Thank you Duncan at Croff House in Hudson!)

I launched on a cool, foggy morning from the boat ramp in Hudson. Vlad and I had used it as the start of many adventures, by ourselves and with companions. 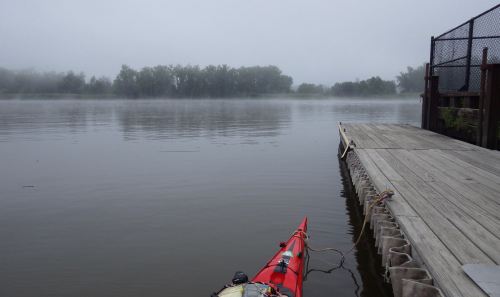 The plan was to paddle down the Hudson, arriving in Yonkers around midday Monday, where I’d leave the boat at its berth in the boathouse. Then I’d catch the train back to Hudson, have dinner, spend the night, and drive home early Tuesday before work.

That would have me covering an estimated 99 miles (86 nautical miles) in three-and-a-half days, with three nights camping.

I’d done the entire route once before with Vlad in 2011 and about half the route on a trip last September with friends. I’d marked out backup camping points, and a couple of bailout points where I could leave the boat safely and head back for my car.

And I’d spent several hours mapping the tides and currents for each day at several points along the route.

So I was pretty well prepared.

But as the saying goes, the best-laid plans….

However, that story’s to come. 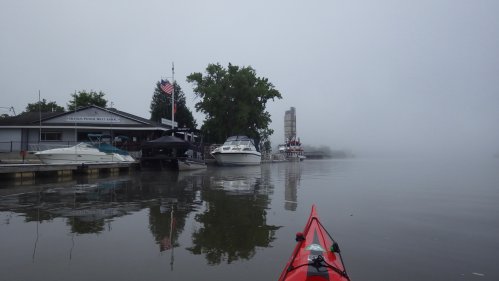 Meanwhile, 90 minutes after launch, I was once again moving freely. If there was damage to the boat, I’d find out at the next stop; for now, there didn’t seem to be a leak.

I waved goodbye to Charles and Pat and kept going.

The day had turned out to be lovely; the morning’s fog had dissipated, and the sun sparkled off the water. There was just enough breeze to keep the heat at bay.

As the miles wore by, my mind spun free. Sometimes I focused on my forward stroke. It’s a form of meditation, the repetitive thoughts and motions, each time trying to improve just a tiny bit.

Other times thoughts would flash into my mind, scraps of ideas, plans for projects I could design. (This time I’d had the sense to bring waterproof paper, along with a pen, so I could jot down the most promising ones. We’ll see if any pan out!) 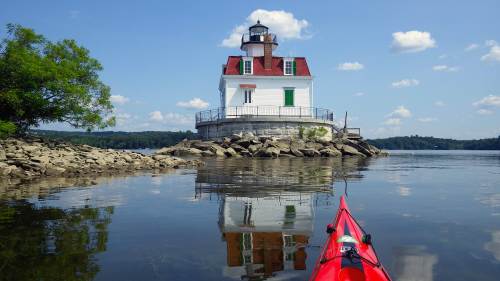 But mostly my mind was filled with sunshine and air, the scent of the river and the periodic wails of the train. There are trains on both sides of the river; CSX runs commercial traffic on the West and Amtrak runs passenger trains up the East. Further south, from Poughkeepsie to NYC, there’s also Metro-North on the East.

At first I was paddling against the current, but as the morning wore on, the flood ended and ebb began, and soon I was gliding along effortlessly with the current. My pace had picked up, from just over three knots to over four.

In early afternoon I passed the first backup camping spot at Magdalen Island; a little while later I was past the second, at Cruger Island. I was just under 2/3 of the way through the trip. Now I was committed to Esopus Island!

Sooner than I’d expected, I could see it off in the distance. Then the river turned and hid the island.

But surprise! As I rounded the bend, a lovely lighthouse appeared. I recognized it from the previous trip (Vlad had taken several photos) but couldn’t recall its name (Esopus Meadows lighthouse). 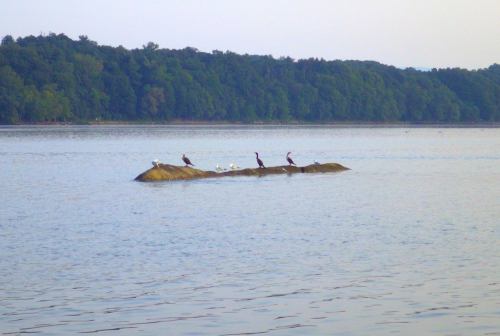 Esopus birds on a rock

I arrived at Esopus Island just past five PM.

With stops, it had taken just under 10 hours; my average paddling pace (according to the GPS) was 3.5 knots, or just over four miles per hour. (It would never be that good again on the trip, but I didn’t know that at that point!)

I unloaded the boat and lifted it up to one of the moss-covered rock ledges that are such a lovely characteristic of Esopus Island. As I turned the boat over, I saw the two new “dings” from this morning’s adventure on the rock. Not great, but nothing fatal (and nothing worse than what was already there).

Since I had plenty of time, I washed my clothes and hung them out to dry, and had a leisurely dinner before setting up camp. I’d seen a state police boat zoom by earlier, and since I’m not quite sure about the legality of camping there, I didn’t want to advertise my presence.

Kept company by the ravens*, who occasionally called out, “Uh huh! Uh huh!” I scouted for campsites. There was a lovely patch of moss under a tree but near enough to the water to catch breezes; it was so soft I almost didn’t need the air mattress. And in the morning, I’d be able to watch the sun rise.

I was very tired, but just a little stiff. Not bad for 34 miles!

I fell asleep around dusk. It had been an auspicious start. 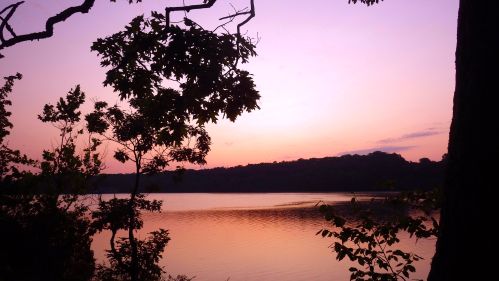 * There is a funny story about the ravens on Esopus Island, recounted briefly here: https://en.wikipedia.org/wiki/Esopus_Island

Apparently just over a hundred years ago, occultist Aleister Crowley spent a “magical retreat” on Esopus Island—for which he brought painting and climbing supplies but no food, saying he would be “fed by ravens”. He was indeed fed—but by his friends, who brought over food in a rowboat.

I always wonder if the ravens that live there now are the descendants of the ones Crowley thought would feed him, and if so, what they thought of the scheme. 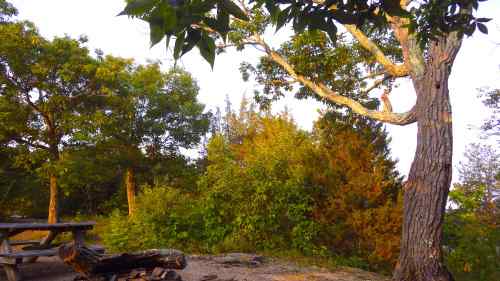