This week’s Photo Challenge is Carefree.

Any guesses where, and what, this is? 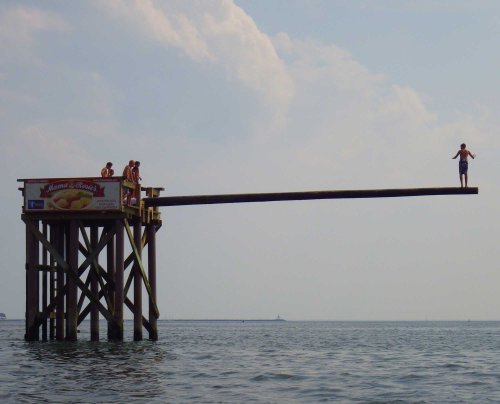 The Greasy Pole Contest takes place every year during St. Peter’s Fiesta in Gloucester, Massachusetts. During this time, many young men try their luck at walking down a greased, wooden pole in the middle of Gloucester Harbor. The goal is to be the first person to grab the red flag at the end of the pole.

The Greasy Pole competition originated in Sicily in the 19th century or earlier, and was brought to Gloucester by the Italian immigrant population of fishermen in the early 20th century. The object is to walk across a greased pole protruding from a platform about 200 yards from shore. This platform, depending on the tide, can be anywhere from 10–25 ft above the water. The pole, which hangs over the water, is 45 feet long, and only about as wide as a standard telephone pole. This pole is then heavily greased with biodegradable axle grease mixed with anything from Tabasco sauce to oil, banana peels, and various other slippery objects. A red flag (or sometimes the Italian Flag with a red flag underneath it) is then nailed to the very end of the pole. The idea is to run out on the heavily greased pole and try to grab the flag before slipping and falling into the water. About 40 or 50 men between age 18–60 go out from Pavilion Beach in Gloucester MA during the St. Peter Fiesta, the last weekend of June. They walk the pole one at a time in a pre-determined order. Generally, the men are of Italian descent, although the walkers may include all nationalities. Because of the popularity of the event, there are strict rules as to who is eligible to walk on Sunday. The event is currently held on Friday, Saturday and Sunday at 4:45PM.

But this was in July. The Greasy Pole was deserted, except for these few kids out to have some fun… or maybe get a leg up on the competition for when they turn eighteen ;-)

Get Ready for Blackburn Challenge 2012!

The other day I looked at the calendar and suddenly realized that there are barely three months left: it’s high time to get into shape, and get the kayaks shipshape, for this year’s Blackburn Challenge!

The Blackburn Challenge, organized by the Cape Ann Rowing Club, is a ~20-mile open water race around Cape Ann, the rocky cape that projects into the Atlantic Ocean north of Boston, Massachusetts. It’s a well known and well established event—last year was the 25th running of the race (and there was one participant who had been in all 25 of them!). The fun part is that the race is open to “all seaworthy oar or paddle powered craft. Classes include men’s and women’s Banks dories, fixed seat singles, doubles, multi-oars with cox, multi-oars without cox, sliding seat singles & doubles, single & double touring kayaks, single & double racing kayaks, surf skis, and outrigger canoes.” Even, in the last couple of years, paddleboards! So it’s quite a colorful flotilla out there on the ocean during the race!

Johna and I have raced in the Blackburn Challenge in 2010 and 2011, and we will be going again this year. The 2012 Challenge is on Saturday, July 14th. If that sort of thing appeals to you, you should certainly think about going too!