The Other Islands of New York City: A History and Guide, by Sharon Seitz and Stuart Miller 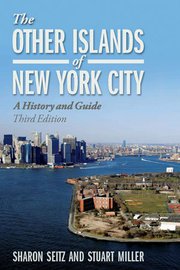 The Other Islands of New York City: A History and Guide, by Sharon Seitz and Stuart Miller. Third Edition 2011.  The Countryman Press, Woodstock, VT; distributed by W.W. Norton, New York.

How many islands are there in New York City? Even lifelong New Yorkers would have trouble answering this question. Several of the islands, of course, are home to millions.  A few other islands have mythical fame: Liberty Island, Ellis Island, Rikers Island… But next to them, sometimes just a stone’s throw away, are many other islands.  Some have long supported their own small human communities; others have colorful histories but today are inhabited only by birds and rats.  This unique book tells the histories and human stories of 45 of the “other” islands of New York City.

The book will never become a mainstream tourist guidebook, if only for one reason: although Seitz and Miller offer helpful suggestions, there simply is no easy way to visit many of the islands.  Many were long ago acquired by government to house institutions of a certain sort—prisons, hospitals, quarantine, cemetery—and so are off limits, even when the ruins of the old buildings now serve only as bird nesting sites.  In some cases the prohibition has real teeth (hint to kayakers:  do not land to have lunch on Rikers Island…).  Then, of course, many are true islands,  accessible only by boat, but often now without any place where a larger boat could land… Plenty of places where a kayak can land, though! Inaccessible to most, with romantic histories and mysterious ruins in the undergrowth—these qualities make the islands irresistible for New York City kayakers. We’ve landed on many of the islands in this book and paddled past all of them—but before reading this book, without fully understanding what we were looking at. 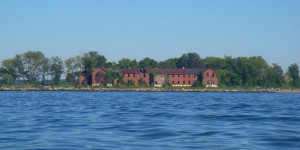 Who would suspect, for example, that this peaceful-looking island has at various times been a popular out-of-town venue for prizefights and other rough amusements of New York City’s underclass, the site of a prison, reformatory, lunatic asylum, and a “school for traffic violators,” the site of a Nike missile battery defending New York City, and is today the largest tax-funded cemetery in the world, with 850,000 bodies of prisoners, indigents, and John and Jane Does buried there from 1869 to the present? (Hart Island)

Or that this island 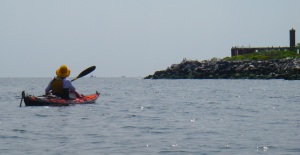 was constructed artificially to quarantine immigrants arriving by ship to New York City who were suspected of having disease such as cholera or yellow fever?  (“Treatment for yellow fever included ingesting both iced champagne and spirits of turpentine.”) Conditions on the island became a scandal when a great wave of immigrants overwhelmed the facilities in the 1880s and 1890s.  Now ruined, the home of birds and seals. (Swinburne Island). 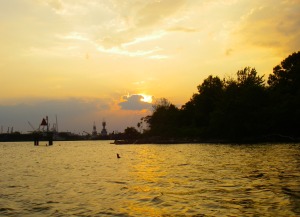 Or that this island, during colonial times a hunting preserve and subsequently a shipbuilding center, in 1902 hosted, in the words of the New York Times, “the most distinguished gathering ever assembled to witness the naming of a vessel in American waters”?  “Two thousand invited guests, including President Theodore Roosevelt, witnessed the launching of Meteor III, a magnificent racing yacht built for the emperor of Germany, Kaiser Wilhelm II.” Now also ruined, and a bird sanctuary… (Shooter’s Island)

The book describes the following islands and former islands:

Today, some of these are islands in name only, having been obliterated by construction (Fort Lafayette is now the Brooklyn tower of the Verrazano-Narrows Bridge) or merged with each other or with the mainland (Hunter Island, Twin Island, Coney Island…) by the work of man (more often than not, of Robert Moses) or of nature. But, in recounting their histories, this book brings the layers of the past that have shaped today’s New York Harbor to life.  Two eras of the harbor emerge particularly vividly.  First, the way the harbor must have appeared even two hundred years ago when New York was a small, compact town on a harbor of sandy shoals, low wooded islands, and salt marshes, a state which one can still see the remnants of in odd corners of the harbor today. Then, the transformation toward the end of the 19th century, when the population and furious energy of the city expanded to the point where seemingly every corner of the harbor had its cluster of industries, spewing pollution into the water, and every rocky islet was crowded with immigrant families.  Today, the city has receded again, leaving many of the islands once more to the birds nesting among the ruins… This extremely well researched, richly detailed, fascinating book describes it all.

(Photos of Hart Island and Swinburne Island by Johna Till Johnson)

2 responses to “The Other Islands of New York City: A History and Guide, by Sharon Seitz and Stuart Miller”