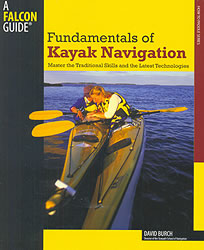 The availability of handheld charting GPS units has made small-boat navigation so easy that many kayakers are neglecting the basic principles that must be used to make navigation, including GPS navigation, safe and efficient. And what to do if that magic box fails, as in a kayak it sooner or later will, due to water intrusion or just dead batteries? David Burch is passionate about all aspects of small-boat navigation, and it shows. His Fundamentals of Kayak Navigation, now in its 4th edition (2008), is a classic.

In this book Burch covers

and many other topics.

The book is a pleasure to read. Each topic is covered in considerable but never excessive detail, and accompanied by plentiful, beautifully clear illustrations that effectively focus on the point being made in each case.

Burch well understands the difficulties of navigating a kayak that may be awash in waves, where the usual navigational tools are lacking, where it may even be impossible to refold the chart in the wind! This is a book specifically about kayak navigation.

The section on GPS and other electronic resources is inevitably somewhat dated (technology has progressed so rapidly since 2008!) and not so useful. This is not a book for those who want to understand how to use their GPS.

Otherwise, Fundamentals of Kayak Navigation is the one-stop resource for everything kayak-navigation-related. As I said, a classic!

Earlier this year, I was contacted by an author, Carmen de Monteflores, about using one of my photos on the cover of her forthcoming new book. And recently, a copy of the published book arrived in my mailbox. Thanks, Carmen!

Unfortunately, I haven’t yet had time to read ¡Jíbara! (which, despite its Spanish title, is written in English) thoroughly. But, skimming it, it looks to be very well written and promises to draw in anyone interested in Puerto Rican culture and history. Here’s a synopsis:

Carmen de Monteflores brings her intimate knowledge of Puerto Rican culture and history to this story of a rural mountain girl-a jibara-struggling to become a teacher during the turbulent changes of the 1930s in the island. After a devastating hurricane, Juanita and her mother, Cisa, to whom she is fiercely attached, are forced to move to San Juan to find work. Like many others arriving from the country, they end up living in a slum. Unexpected circumstances introduce Juanita to Clara. They become close, but their lives take different paths. Juanita enters the university to be tested both by violent politics and her mother’s illness. Clara’s influential relatives introduce her to society life and her husband-to-be. Relationships become strained and lies and secrets explode when Juanita asks for help from a former teacher and from a close friend of Clara’s as Cisa gets sicker and Clara’s marriage collapses.

The finished book illustrates some of the perils of selecting photos for cover art. The book has a portrait format. But the original photo had a landscape format, and consequently most of it had to to be cropped away. And, inevitably, the colors came out differently on the printed cover. Oh well—I did get paid ;-) 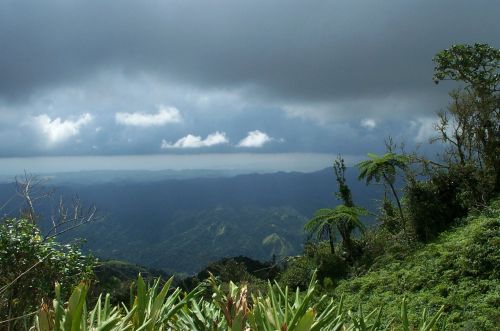 More photos from that day in October 2001, high up in the Cordillera Central of Puerto Rico, are here. 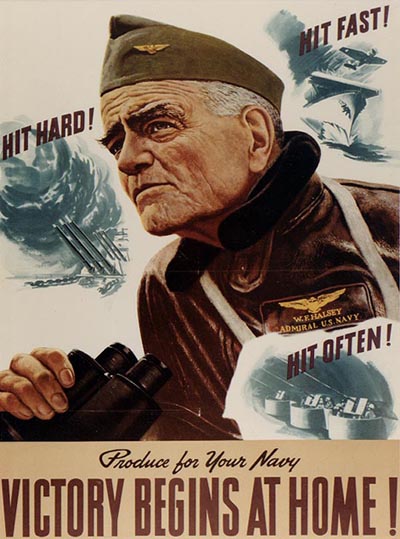 This sketch is one of several inspired by the book, The Admirals: The Five-Star Admirals Who Won the War at Sea, by Walter R. Borneman. It’s about Admirals Halsey, Nimitz, King, and Leahy, each of whom played critical roles in World War II, and were the only admirals to earn five stars in all of American history. (For the other sketches in the series, see Triptych: Three Admirals.)

More than that, the book is about leadership, character, and how a flawed individual can rise to greatness—not in spite of, but often even precisely because of, those flaws.

Halsey was a pugnacious fighter, wisecracking and hotheaded, whose passion was winning the game (or battle). His courage and determination helped re-energize and inspire a Navy demoralized and depleted by the hideous surprise of Pearl Harbor. Yet his appetite for the fight paradoxically cost him participation in some of the defining battles of the Pacific, and could have cost the war. But anything he did, he did wholeheartedly—and there was never any question of stopping him.

END_OF_DOCUMENT_TOKEN_TO_BE_REPLACED

Sailors preparing for the funeral, May 2014 (photo provided by Steve Hannifin)

Medicine, the ministry, and the military. Those were the “three Ms” that—according to my mother—defined the callings of our family, dating back to before the American Revolution. Each is characterized by a commitment to a greater good than self, or even family: Healing, God, country.

That sense of commitment is likely one reason my mother came to marry my father, a naval officer, and it permeated my life growing up.

When we uprooted ourselves to move across the country or around the world for the fifth (or the seventeenth) time, it wasn’t for personal gain. It was because the Navy needed us there to protect our country. That’s what my parents said, and that’s what we believed. When our country called, we came—particularly my father, who spent years underwater in a nuclear submarine.

Some day I’ll write about my father. But meantime, this is enough to explain how I came to spend a recent Friday in Annapolis, at the Naval Academy cemetery, where the ashes of my father’s former commanding officer, Vice Admiral Patrick J. Hannifin, were laid to rest.

It was an uncharacteristically gray, cold, and drizzly day in late spring. I’d gotten up at 3:30 AM to make the four-hour drive to Annapolis. I arrived an hour and a half early, giving me plenty of time to think, and to remember.

As I sat in the white marble open-air “columbarium” overlooking the gray-green water of College Creek, the memories came flooding back. I’d spent three years living on the Naval Academy grounds from ages 8 to 11, while my father was head of the division of Math and Science.

Like many children, I was oblivious to the weight of history. To me, the Academy was a delightful, safe, and well-tended park. I never thought about the fact that the green torpedoes I loved to play on (just the size for an 8-year-old to ride!) were taken from Japan during World War II. Or that I practiced gymnastics, fencing, and swimming in MacDonough Hall (named after a remote ancestor on my mother’s side, Admiral Thomas MacDonough). Though from time to time I passed by Nimitz Library, the Halsey Field House, and the King Hall dining facility, these were all just names to me. 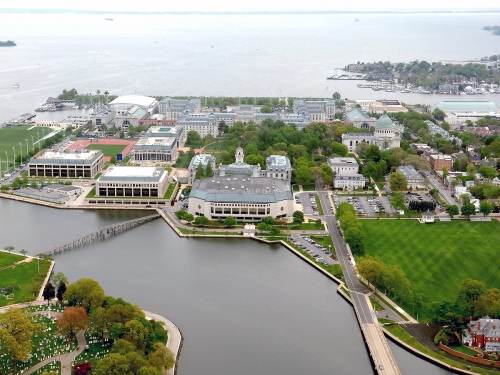 Even this May, as I looked out at the flowing water and the campus beyond, I didn’t think about history. I thought about my father, who died in 2008. I thought about Admiral Hannifin. I thought about all the men I’d known who shared my father’s commitment—and what they had exemplified as leaders, and as human beings.

Maybe that’s why, walking through an airport on a business trip a few days later, I was inspired to pick up a book called “The Admirals”, by Walter R. Borneman.

It’s subtitled, “The Five-Star Admirals Who Won the War at Sea”, which pretty much says it all. It’s about Admirals Nimitz, Halsey, King, and Leahy, each of whom played critical roles in World War II (and who were the only admirals to earn five stars in all of American history).

The book is fantastic. It’s about more than just the people, or the events. It’s about leadership. And it’s about character, and how a flawed individual can rise to greatness—not in spite of, but often even precisely because of, those flaws.

Of the four men profiled by Borneman, three really resonated with me: Nimitz, Halsey, and King.

Nimitz was even-tempered and genial, a consummate engineer who threw himself into every project that was handed to him, and whose supreme satisfaction was a job well done. Halsey was a pugnacious fighter, wisecracking and hotheaded, whose passion was winning the game (or battle). And King was a brilliant careerist, convinced (usually correctly) that he was smarter than anyone else, and determined to win the accolades to which he felt entitled.

Their individual responses to learning of the war’s end sum each up perfectly. In each case, an aide burst into the Admiral’s office with the news that the goal of four years’ uncompromising and exhausting effort had been achieved: the Japanese had surrendered unconditionally.

Halsey’s response was to leap to his feet and begin pounding the aide’s shoulders in joy.

King reportedly looked stricken, and said, “But what am I going to do now?”

And Nimitz? He said nothing, just allowed himself a small, perfectly satisfied smile.

In three following posts, I will post a short sketch of each of these unique leaders, drawn largely from Borneman’s book (which again, I highly recommend) with some additional research:

Halsey: The Unstoppable
Nimitz: The Unflappable
King: The Impossible

Book Review: From Pigeons to Tweets 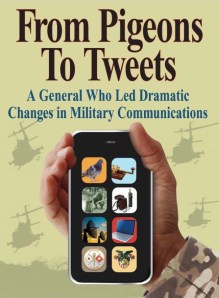 Okay, I know I have weird tastes in reading material. But when I picked up “From Pigeons to Tweets”, I didn’t expect what I actually got.

The subtitle is “A General Who Led Dramatic Changes in Military Communications”, and the author is Lt. Gen. Clarence E. McKnight Jr. (along with journalist Hank H. Cox).

Given that, plus the relatively staid promotional blurbs from a range of military luminaries, I was expecting a dry treatise on the history of military communications technology.

That would have been interesting enough. I’m fascinated by military technology in general, and military communications technology in particular. (I told you I have weird tastes!)

What I got was (in part) a rollicking and thoroughly absorbing memoir by a man who rose to the highest ranks of the U.S. Army’s Signal Corps (the branch that focuses on communications technology) and who had a reputation for hands-on effectiveness in setting up communications systems. (“McKnight could communicate from Hell,” says one of his colleagues—as a compliment.)

END_OF_DOCUMENT_TOKEN_TO_BE_REPLACED

.
From the description of the book on Amazon:

“The World’s Toughest Endurance Challenges” profiles 50 of the most extreme marathons, triathlons, bike rides, adventure races, climbs, open-water swims and other iconic endurance events from around the world. Breathtaking full-color photographs and insider commentary from top athletes will thrill endurance athletes, extreme sports addicts, and outdoor adventurers of all stripes.

END_OF_DOCUMENT_TOKEN_TO_BE_REPLACED

When I first started kayaking, in those spare moments when I wasn’t actually on the water I eagerly read every kayaking book I could lay my hands on. And this book was one that all experienced paddlers recommended. Possibly they were tired of explaining afresh to each clueless newbie all the things that could go wrong. This book does that job soberingly well.

END_OF_DOCUMENT_TOKEN_TO_BE_REPLACED

The Other Islands of New York City: A History and Guide, by Sharon Seitz and Stuart Miller

The Other Islands of New York City: A History and Guide, by Sharon Seitz and Stuart Miller. Third Edition 2011.  The Countryman Press, Woodstock, VT; distributed by W.W. Norton, New York.

How many islands are there in New York City? Even lifelong New Yorkers would have trouble answering this question. Several of the islands, of course, are home to millions.  A few other islands have mythical fame: Liberty Island, Ellis Island, Rikers Island… But next to them, sometimes just a stone’s throw away, are many other islands.  Some have long supported their own small human communities; others have colorful histories but today are inhabited only by birds and rats.  This unique book tells the histories and human stories of 45 of the “other” islands of New York City.