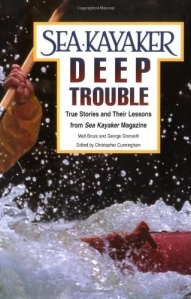 When I first started kayaking, in those spare moments when I wasn’t actually on the water I eagerly read every kayaking book I could lay my hands on. And this book was one that all experienced paddlers recommended. Possibly they were tired of explaining afresh to each clueless newbie all the things that could go wrong. This book does that job soberingly well.

Sea Kayaker’s Deep Trouble offers more than twenty harrowing, real-life accounts of sea kayaking accidents that will both keep you on the edge of your seat and instruct you with potentially life-saving lessons. These tales, drawn from Sea Kayaker magazine, are the result of interviews with accident survivors, witnesses, and rescuers. From capsizes and hypothermia to brushes with sharks and entrapment in sea caves, the situations are described in chilling detail and then subjected to expert analysis: … What did the paddlers do wrong? What did they do right? Most importantly, how might the accident have been prevented? With a comprehensive introduction to kayaking safety and three dozen sidebars on gear, skills, and techniques, this book is a must for any sea kayaker who wants to paddle safely.

Nevertheless, a certain monotony creeps in. The same root causes repeat over and over. The paddlers are generally unprepared and inexperienced. (However, several chapters make it clear how even experts can get into trouble, especially when they must look after less experienced paddlers. One chapter features Eric Soares, the Tsunami Ranger who sadly died this year.) The paddlers are capsized by wind or in a tide rip. From that point on the situation steadily deteriorates. The paddlers can’t rescue themselves, or, if they do, they are merely back in the conditions that capsized them in the first place. They capsize again. They lose equipment or even their boats. And then hypothermia does them in.

In most of the chapters in the book, this sequence was interrupted by external rescue at the last moment—otherwise there would be no-one left to tell the instructive tale. But there are a few chapters where rescue did not come in time. These chapters are much shorter.

Possibly because there are only so many times that the same basic story can be told, there’s been no sequel to this book, even though Sea Kayaker has continued to publish these “Safety” stories. The stories in this book are all from the early years of the magazine.

It’s striking how many of the stories are from the Pacific Northwest—the Washington coast, the San Juan Islands, British Columbia (and also Alaska). As the Introduction explains, “This is not because the region is kayaking’s Bermuda Triangle.” Rather, it’s a region with a long history of recreational kayaking, and so kayaking accidents, and furthermore a region that combines beautiful, accessible marine scenery that attracts all manner of paddlers with strong currents  and winds that can easily overwhelm those who are unprepared.

Among all these chapters that feature unspoilt natural beauty and natural paddling hazards, one chapter stands out like a sore thumb. It’s entitled “The Phantom Barge,” by Alison Armstrong. It’s a gritty tale of urban paddling, and its hazards, from our very own New York City.

It’s also by far the best-told story in the book—even though I think poetic license must be granted to some of its more colorful details—and I can’t resist retelling it here largely in its own words.

In the late afternoon of July 3 (perhaps not the best day in the year for such a trip), 1990, Alison and her friend Ken set sail in their double folding kayak equipped with a sail rig from the old Downtown Boathouse on Pier 26 up the Hudson River.

It was an idyllic trip—at first. They reached the George Washington Bridge, “then continued to sail north beyond the Cloisters. The Palisades glowed in the twilight of a perfect summer evening. The river was bathed in lavender light from the setting sun, and a nearly full moon rose over Manhattan. Colorful sparks from fireworks too far away to hear illuminated the broad, calm river. Pleasure boats of all sizes greeted us; an occasional barge pushed by a tug passed regally.”

It became dark, and “feeling relaxed, competent, and fortunate,” they turned around to sail back down the river.  Now sailing against the wind, they had to tack back and forth across the channel. “I periodically scanned the river with the lantern and illuminated our sails to warn other boats of our presence. Although we had right-of-way over motorized vessels [uh-oh…], we were always prepared to give way to larger, faster boats.”

Then, disaster. “A dark wall of steel, some thirty feet high, bore down on us. It seemed to have come from nowhere. It had no lights and no one was on it to call out to. We had only an instant to act … Expecting to feel the crunch of a thousand tons of steel on my backbone, I rose from my seat and dove over the right leeboard … Foaming water flooded over my eyes—and a sucking power pulled me back and under. Despite my attempts to swim, I was sucked into a churning vortex beneath the massive steel hull. I could hear the incessant, dull roar of the motor as it surged above me and felt the barge’s hull press and rub against my back.” 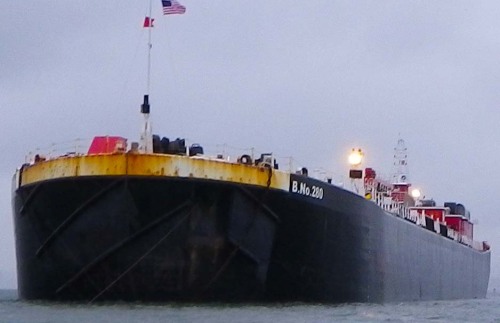 At last Alison surfaced to see Ken’s head “bobbing among the waves as the blunt back end of a huge barge, pushed on the opposite rear corner by a white tugboat, plowed down the river, its crew unaware of us struggling in its wake.”

“Everything became very still except for … the occasional burst of fireworks over Manhattan.” It was after midnight, and they were exactly in mid-river. The kayak was wrecked, full of water, but afloat (a folding kayak!). They got astride it. Ken was bleeding from a head wound.

“Using Ken’s paddle, we attempted to direct the kayak toward the Manhattan side. We soon realized we would not be able to paddle to shore before the combined forces of the river current and outgoing tide swept us by Manhattan.”

“Ken retrieved the waterproof flares from his repair kit. As the waves inundated the boat and splashed into our faces, he attempted to read by moonlight the tiny print of the instructions. The first flare went off quickly and burned a hole in his right index finger. He fired the remaining two flares aloft, but they were no competition for the early Independence Day fireworks on the shore.”

But, although it may not have seemed so at the time, the worst was over. The story now veers increasingly toward the kind of grim comedy that is familiar to all living in the big city.

After almost an hour in the water, Alison and Ken were rescued by four boys in a motor boat, who “begged us not to put their names in the paper. They had borrowed the cabin cruiser, which belonged to one of their fathers, without permission.”

The Coast Guard, contacted over the radio, “responded that their presence was not necessary since no one was killed and ‘only’ a kayak was involved.” So their rescuers took Alison and Ken, with the kayak in tow, to a marina in Weehawken, on the New Jersey side of the river, where paramedics were waiting for them.

“We stepped into what seemed a freezing air-conditioned ambulance. The young paramedics seemed to be interested only in repeatedly taking our blood pressures, despite a blare of rock and roll coming from the ambulance radio that must have made it impossible for them to hear a pulse.”

“We fared no better in the emergency room—nobody seemed to understand that we were in shock, cold, and dripping with filthy water, that Ken was still bleeding from an open head wound. No one thought to get us dry, clean, and warm. The first order of protocol was to put us into wheelchairs and interview us at length about our insurance status while we sat in the air-conditioned lobby.”

“A nurse joked, ‘How’d you hold your breath so long? Sure is a good thing you don’t smoke. Anything I can get you?’ I longed for a smoke and cup of coffee but I had to be content with an aspirin and cup of weak tea.”

“At 4:00 A.M. on the Fourth of July, we were released from St. Mary’s emergency room. Barefoot, wearing nothing but green cotton hospital gowns (the type that tie at the back and flap open), without any money, and carrying our soaked belongings in a large, clear plastic bag, we walked out of the hospital into a taxi-cab. On the way to Manhattan, we announced to the driver that we had money but none with us…”

Later, a Coast Guard officer told them that there are “unlit barges engaged in illegal traffic at night on the Hudson.”

To any New York City kayaker, this will all seem quite familiar. Certainly I’ve done my share of night kayak sailing on the Hudson, and then Johna and I had that little adventure in Brooklyn last year… This story injects a welcome note of comedy into an otherwise sober book.

So if you are a kayaker—especially a beginning kayaker—buy this book! Quite apart from the entertainment value, the examples of what not to do and how not to do it, the safety information, and the practical advice contained in this book might just one day save your life.