(Clearly, I might have to rethink this reply, although not the sentiment, after this summer’s sewage disaster…) 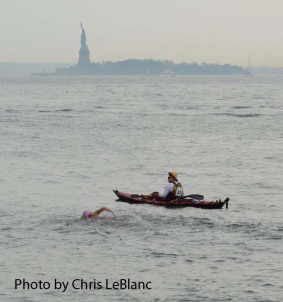 Each year, NYC Swim puts thousands of swimmers into that water for a series of short and longer swims in New York City’s waterways. Their premier event each summer is the Manhattan Island Marathon Swim (MIMS), a 28.5-mile race around Manhattan. Along with the English Channel and Catalina Channel swims, it is one of the three swims in the Triple Crown of Open Water Swimming.

The Lone Starlettes scoping out the Battery from the land side beforehand: (left to right) Pam LeBlanc, Katy Dooley, Leslie Blanke, Gretchen Sanders

In this year’s MIMS, on June 18, 2011, I was the kayaker for a relay team, the Lone Starlettes (no prizes for guessing which state they are from

It was still cool in the early summer morning as I paddled from Pier 40 on the West Side of Manhattan down to the South Cove, just north of the Battery, for the start of the swim.

Off South Cove, kayakers were already gathering. A significant part of New York City’s kayaking community turns out for the Manhattan Island Marathon Swim. It was a chance to catch up with old friends and paddling companions. Some of them I see only once a year, every year, on this occasion.

A last-minute chance, too, for the kayakers to meet their swimmers… 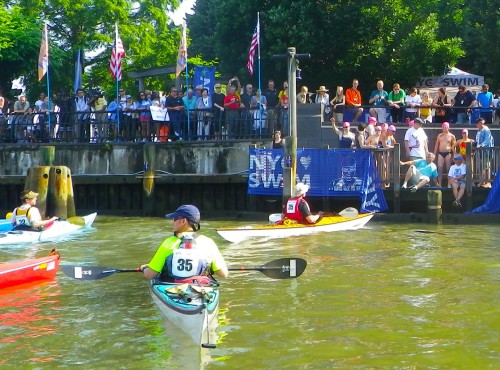 One by one, the swimmers jumped off the dock into the water. Evan Morrison,  who finished third in the race, has posted the “jump shots” of himself and some of the other top swimmers, and described the feeling of first entering the water for a marathon swim. Here’s Katy, the lead swimmer for the Lone Starlettes, jumping in:

And then they were off! Katy had a very strong start and soon was in the lead of her wave of swimmers.

Katy out in front. I (in red Feathercraft kayak, yellow hat) am trying to catch up. 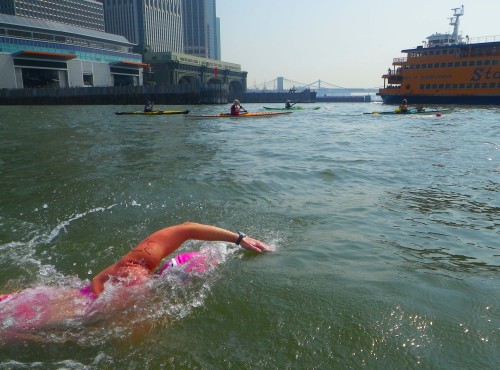 At the Battery, a slight detour was necessary around the stern of the Staten Island Ferry, which docked through the cloud of swimmers and kayakers. Schedules must be kept!

Then, picking up the fast East River current, we swept in no time at all under the Brooklyn Bridge…

At least on this day, Katy was probably the fastest swimmer of the four Lone Starlettes… which is remarkable considering how much energy she put into throwing water in the air! Since she swam very close to me, I was soaked. But no complaints on this hot day! In any case, I do believe I got my own back by hitting her once or twice on the head with my paddle… :-)

At that point we were joined by our support motor boat, the Sea Mist, with the other three Lone Starlettes on board. It would be their turn soon!

I include this photo mainly because it’s quite a nice one of me :-)

Katy was swimming very strongly, gradually passing other swimmers… also because we stayed as far away from the Manhattan shore, out in the strong current, as the race officials, patrolling up and down the river in motor boats, would let us get away with…

At the Williamsburg Bridge, Gretchen took over from Katy and stroked quietly and methodically past the spires of Midtown.

Gretchen effectively maneuvered all the way through this pack and left it behind… very neatly done!

Then the accelerating current swept us into the narrow strait between Manhattan and Roosevelt Island. The swimmers followed a tight line through the boils and swirls just off the the Manhattan seawall, while cars zipped past on the FDR Drive. ………………………

At the Queensboro Bridge, it was Pam’s turn to swim. And finally, at the Wards Island Footbridge, Leslie took over. Now all the Lone Starlettes had had their first dip in New York City waters!

Leslie waiting for Pam under the Wards Island Footbridge

But Leslie now faced the most frustrating part of the swim. Just before she took over, we had made an abrupt transition from the fast favorable current of the East River into the unfavorable—though mercifully somewhat slower—current still coming down the Harlem River.

Bunching up in the Harlem River

It was like hitting a wall. The field of swimmers (and the accompanying cloud of kayakers and motor boats), which had spread out in the East River, now bunched up again as the leading swimmers were held back by the Harlem River current while the trailing swimmers were still being pushed forward by the East River current. So the fast swimmers in front—including the Lone Starlettes—were now being penalized for having swum so fast! Not fair! Evan Morrison has posted a nice analysis of this effect from a swimmer’s perspective. As he remarks, “In MIMS, the tides are king—perhaps more so than [in] any other major marathon swim.”

Leaders up ahead, or perhaps just around the corner :-)

But it was nice to see the race leaders, who previously had been out of sight somewhere far ahead, now only a few hundred yards in front. The problem was that it took many minutes to cover those few hundred yards. And in that time the leaders were another few hundred yards further on… (“In a race, the quickest runner can never overtake the slowest, since the pursuer must first reach the point whence the pursued started, so that the slower must always hold a lead.” — Aristotle, Physics.)

The race now became very quiet, almost sleepy in the sun. There was not much to do—except, of course, for the swimmers, who were swimming as hard as ever but only inching forward against the current…

A classic shot! Pam takes it easy on the “Sea Mist” while outside others struggle against the current :-)

Eventually, after an hour or so, the current began to release its grip. We began to move perceptibly faster (I was watching my GPS), faster still, and then, in due course, the current turned in our favor.  The field gradually spread out again. 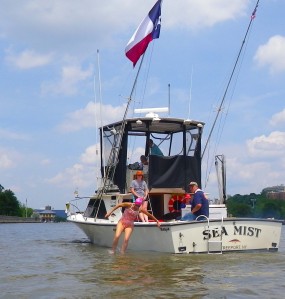 From then on, we moved along without too much stress. Up ahead the race leaders were fiercely competing for position—Evan Morrison, who was among them, has posted a blow-by-blow account (in several parts, the first of which is here).  But we were alone in our own patch of water most of the time. The four Lone Starlettes took turns to swim every half-hour. 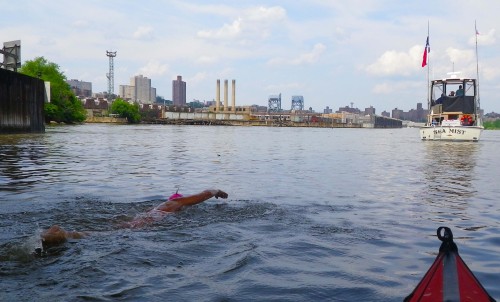 I believe this was the result of just ONE 30-minute swim leg…the Lone Starlettes went through a LOT of swimsuits!

The Harlem River, especially, was very dirty—full not only of debris such as tree branches and plastic bags, but also other stuff that only made itself evident after the fact… 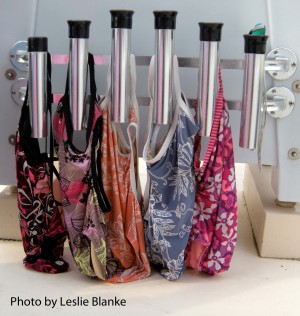 Finally we passed under the low railway bridge at the end of Spuyten Duyvil and emerged into the broad Hudson River. Across the river was the green wall of the Palisades; looming downriver was the huge George Washington Bridge. Soon the skyline of downtown Manhattan—our goal!—came into view under the bridge… 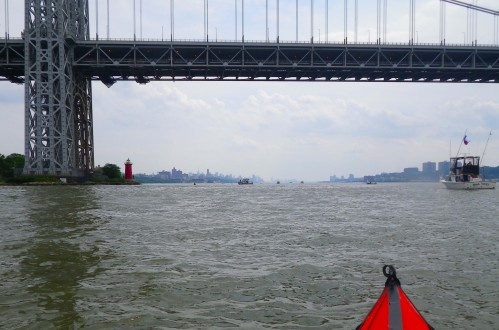 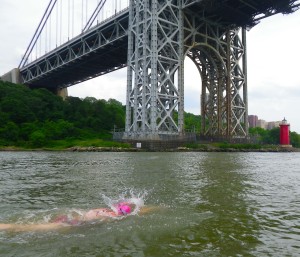 It fell to Gretchen to swim under the bridge, past the Little Red Lighthouse nestled at its foot.

Here and there in the distance ahead, there were the familiar groupings of a motor boat, a kayak, and the tell-tale splashing in the water beside them. But they remained in the distance as we floated, almost serenely, down the Hudson. The serenity was deceptive as we were now moving fast with a strong ebb current, and, of course, the actual swimmer—Katy, Gretchen, Pam, and Leslie, in turn—was working as hard as ever…

Some scenes from the Hudson:

Pam tries walking on the water

As we approached the Midtown piers, we saw that two huge cruise ships were ready to depart. A cat-and-mouse game with departing cruise ships is a feature of MIMS in most years. We were lucky: the first ship pulled out before we arrived, and the second after we had already passed. But swimmers behind us were held up by the second ship—and, as I understand, held up the ships’s own timely departure in turn—with tempers raised…

Fortunately, this year’s MIMS also omitted the traditional afternoon thunderstorm, which has interrupted or even halted the race in several previous years. 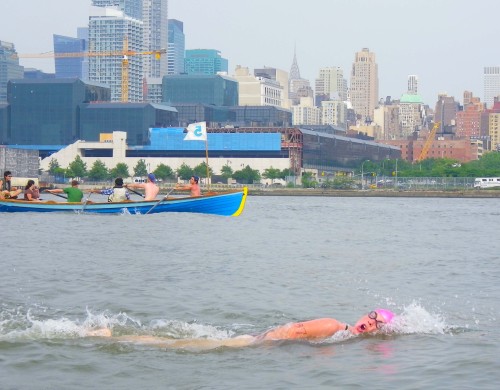 Gretchen passes the Chelsea Piers and the Empire State Building

After 7-1/2 hours, South Cove—the finish line—was in sight! Pam was the lucky one to swim the last leg. We passed Pier 40 and the Holland Tunnel ventilator, skirted a protruding ferry terminal, and passed on the correct side of the yellow and orange NYC Swim buoys that marked the final stretch. In the distance across the harbor was the Statue of Liberty.

Then it was only a few hundred yards more along the seawall, to cheers of supporters as well as strangers who no doubt were wondering what possessed these people to do this.

And then it was over!! Pam made the final turn into South Cove and touched the ladder and eager helping hands. 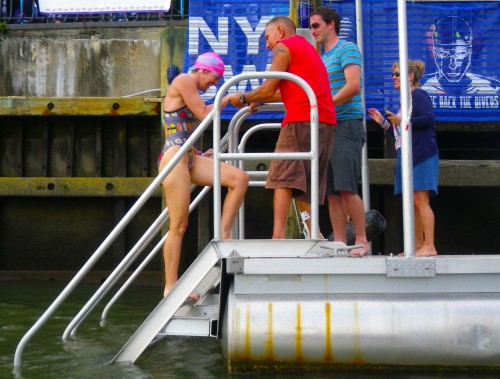 I think they enjoyed it. Pam wrote on her blog, “Fit City”, at austin360.com, “It’s like no other event I’ve ever experienced. Imagine seeing the Brooklyn Bridge from below, or getting a glimpse of that New York City skyline with every breath…Unbelievable!” And in a subsequent longer article in the Travel section of the Austin American-Statesman, she wrote, “When someone reached out a hand and lugged me out of the water, I didn’t want the swim to end.”

And it looks like at least some of the Lone Starlettes will be back to do it again next year!

I had fun too, in all kinds of ways. For instance, there was plenty of time during the swim to listen to the radio.  I mean to the VHF radio channel on which the hundred or more motor boats and kayakers were simultaneously communicating, trying to give directions, and generally wondering what was going on. “Herding cats” and “fog of war” are the phrases that come to mind.

Every now and again, above the general din, I could also hear a familiar voice insisting that his kayak was NOT sinking—it was only a little leak… (Sorry, Erik!)

But it was the following exchange, heard as I was turning into Pier 40 after paddling back from South Cove through the last group of swimmers coming down the Hudson, that made my day. It was an exchange between one of the motor boats captains directing the swim and the harbor authorities—I believe it was Vessel Traffic Service (VTS) New York. I paraphrase:

Swim motor boat: “VTS, this is NYC Swim… be advised that the last swimmer is now passing the tunnel ventilator.”

VTS: “Roger that, sir, the last swimmer is passing the Lincoln Tunnel ventilator.”

VTS: “Roger that, sir, the last swimmer is passing the Holland Tunnel ventilator…”

All of my photos from the day are here.