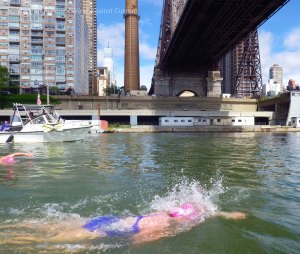 Each summer, NYC Swim organizes a series of shorter and longer swims in New York City’s waterways. The premier event is the Manhattan Island Marathon Swim (MIMS), a 28.5-mile race around Manhattan. Along with the English Channel and Catalina Channel swims, it is one of the three swims in the Triple Crown of Open Water Swimming.

Each swimmer is accompanied by a kayaker (as well as a motor boat). So on Saturday a week ago, I kayaked around Manhattan with swimmer Katy Dooley. Katy already knew all about swimming around Manhattan, having swum in MIMS in 2011 as well as 2012—but in both cases as part of a relay. This was going to be her first solo round-Manhattan swim.

This year’s MIMS turned out to be interesting, to say the least. Due to a cascading series of problems, some traceable all the way back to last year’s Hurricane Sandy, others to the unseasonably cold water, and still others to the heavy rains in the previous couple of days, only 11 of the 39 solo swimmers completed the entire swim unassisted.

But Katy was one of them! She powered through, finishing 5th (and 2nd woman) in 7 hours, 44 minutes. And by completing her swim around Manhattan, she became only the 69th swimmer to join the elite club of Triple Crown open water swimmers. A major accomplishment on a very difficult day—and inspiring to watch from close up!

I’ll write more about the swim in a future post. (My writeups of MIMS 2011 and 2012 are here and here.) But in the meantime, here are some of the photographic highlights of MIMS 2013. 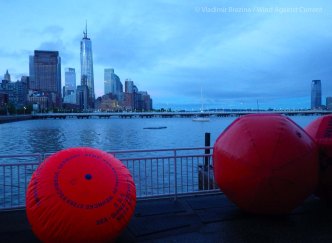 Dawn at Pier 40. Swim buoys are ready for deployment

… as is Johna (she is to accompany another swimmer, Gretchen Sanders)

… to paddle down to North Cove to check in

Across the Hudson, Jersey City catches the early light 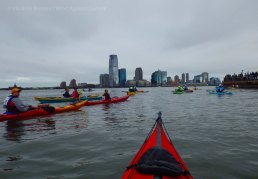 Later, at the start off Pier A, the kayakers gather

Nothing to do but snap photos of each other and wait…

Across the harbor, the Statue of Liberty 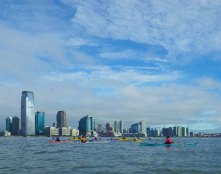 Katy has a strong start. Around the Battery…

… past the South Street Seaport

Portrait of a swimmer

… and under the Brooklyn Bridge

Under the Williamsburg Bridge, with the iconic Domino sugar factory 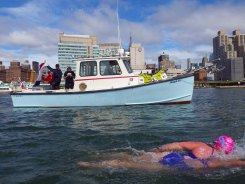 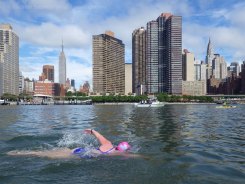 Midtown Manhattan, with the Empire State Building and the Chrysler Building both in view 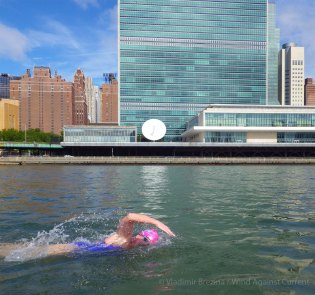 Past the UN Building

Fighting for position under the Queensboro Bridge

Johna pays us a visit

Safely in the Harlem River, Katy powers toward the RFK (formerly Triborough) Bridge

The less said about the Harlem River, the better

Finally out in the Hudson! Under the George Washington Bridge 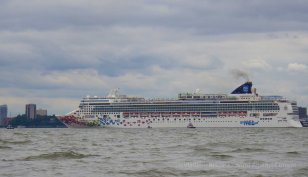 Approaching Midtown, an obstacle removes itself just in time 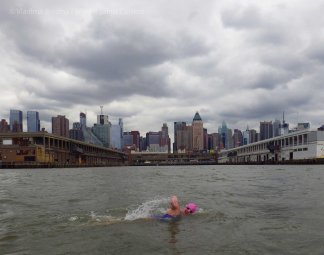 Past the Chelsea Piers

One final look at the Empire State Building 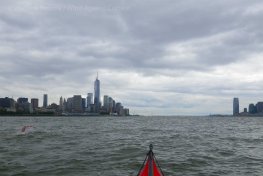 The finish is in sight!

The last stretch, along the wall

Above, a cheering crowd

.
These and other photos are here.