Long Island Kayak Circumnavigation: Day 1—Off to The Rockaways! 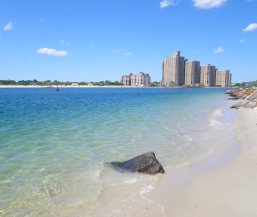 .
(click on photos to expand them—they look a lot better when they’re BIGGER!)

So, finally, at 8:00 AM on Wednesday, June 27, we were launched on our big adventure! After the stressful preparation and several postponements, we could hardly believe that we were really on our way. We nosed our boats out of the Pier 40 embayment, past the Holland Tunnel ventilator out into the Hudson River, as we had done hundreds of times before on day trips. But this time we wouldn’t be back in a few hours—we were going much farther! 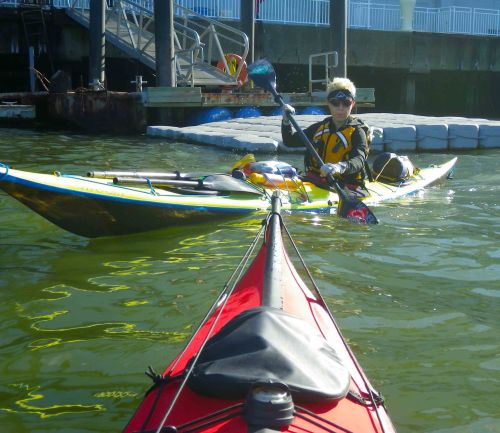 At Pier 40 in Manhattan, the first strokes of the circumnavigation

As we rounded the ventilator, we felt a nice kick of the ebb current that would carry us south. Soon we were coasting down the familiar waterfront at 5 knots, enjoying the morning sunshine. We paddled past the tip of Manhattan, Governors Island, and the Statue of Liberty. Up ahead in the distance we could see the Verrazano-Narrows Bridge, the gateway to the Atlantic—and our paddle into unknown waters! 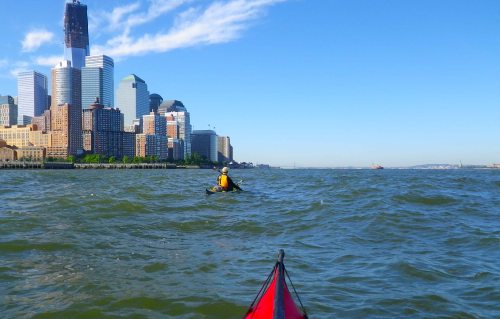 Familiar waters still: looking down the harbor, with the Verrazano-Narrows Bridge in the distance

We figured we would have the ebb current with us until about 11 AM, just (barely) long enough for us to round Breezy Point, out of New York Harbor into the open Atlantic. But the issue of current was soon made moot by another factor—the wind. 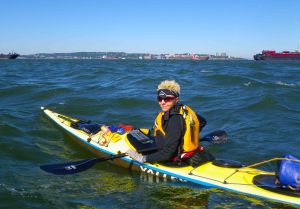 This morning, the wind was blowing out of the west at about 15 knots, with higher gusts. This created some vigorous chop. But our heavily-loaded boats felt very stable, and we were rather enjoying the ride. And we figured the west wind would push us nicely along, even if the ebb current faded, in the stretch between Coney Island and Breezy Point, where our course would turn more easterly.. 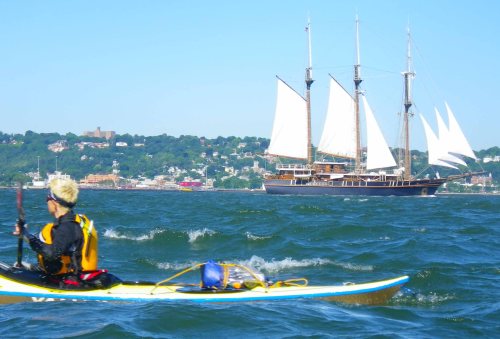 Outbound and inbound at the Narrows 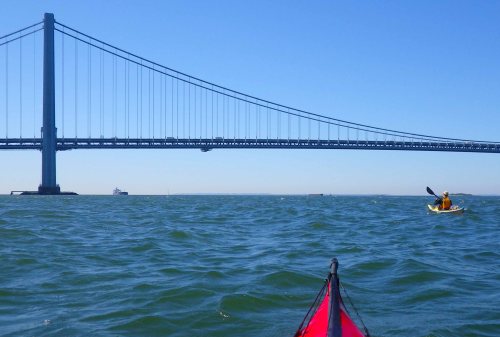 Under the Verrazano-Narrows Bridge, as many times before, but today with a new meaning!

But we did not count on the two points of land that we would have to round before we were finally out of New York Harbor: Norton Point, at the western end of Coney Island, and Breezy Point itself.

A word for non-paddlers: Points of land are among the trickiest locations to maneuver around. There are typically shoals. And there are often strong currents and conflicting flows of water, such as when an outgoing current collides with incoming ocean swells. The result: Big, powerful waves, and tide rips—areas of turbulent, choppy water that pulls your boat in unexpected directions.

We knew that at this stage of the tide there was going to be a counter-current flowing round the back of both Norton Point and Breezy Point, and a marked tide rip at Breezy Point. But we didn’t worry overmuch about either point—we’d paddled many times around both. No big deal, right?

We were just a bit overconfident! The chop picked up as we drew close to Norton Point. The waves were hiccupy,  looking as though they’d swallowed air, with long streaks of silvery bubbles underwater. Soon the waves were tossing our boats around, boiling over bow and stern. Johna concentrated on keeping her Photon balanced, which took quite a lot of edging and bracing. At one point she caught a glimpse of Vlad, submerged almost to the waist in white foam, with just the stern of the Red Herring poking out above the waves. (He later said that was the one time he’d been a bit worried, especially as, on just its second day on the water, the boat was still a bit unfamiliar.)

We’d been expecting rough waters later on in the trip, at Shinnecock Inlet and Montauk and Orient Points—but not here, in our friendly “home” waters!

The stretch between Norton Point and Breezy Point was rough, with breaking waves as far as the eye could see. Finally we crept up to the tip of Breezy Point along its long stone jetty, looking carefully for the eddy line that marked the edge of the tide rip.

Going through the tide rip, once again we were tossed by big breaking waves–but fortunately, only for a short while. Then we were through into calm water that, ironically, was the open Atlantic Ocean. Now leaving our customary waters, we felt as though the trip had started at last! 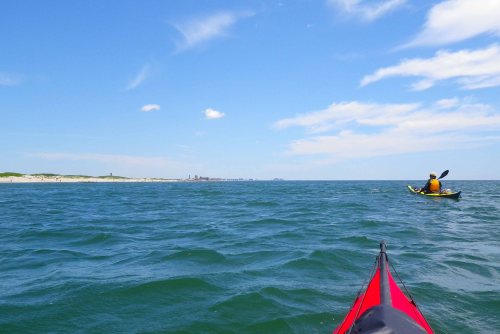 For the rest of that morning, we paddled along the coast. The swells were gentle and the water calm, partly shielded by the land from the west wind that now just pushed us nicely along and offset the summer sun. We marveled at the long stretch of white sand, with bathers here and there. But soon the sight of the endless beach grew weary and we were happy about our decision not to paddle along that outer beach for the next hundred miles all the way to Montauk, but rather to duck into the more interesting-looking inner bays as soon as possible. 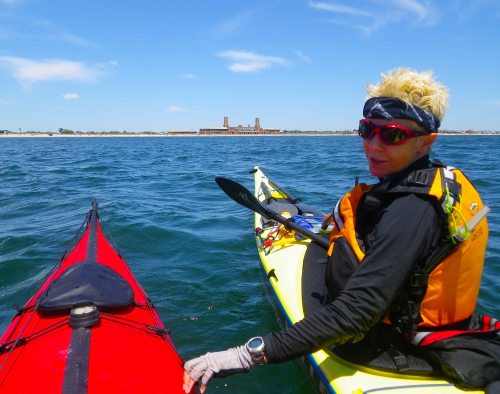 Are we there yet?

No…. but it’s time for some liquid lunch… 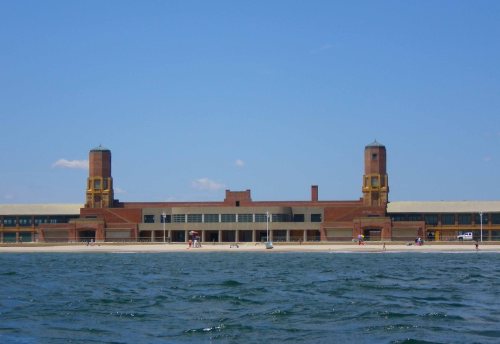 By early afternoon, we’d reached Rockaway Inlet, our entry point into the inner bays and, along their southern edge, the intracoastal waterway of Long Island’s South Shore that we intended to follow. 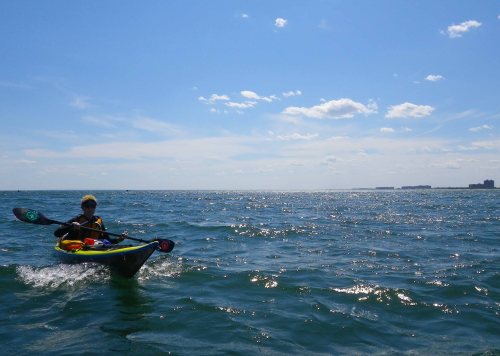 In the inlet, we stopped for a late lunch on a beach that, with its fine white sand and crystal-clear water, looked for all the world like a tropical paradise—except without palm trees, and with some industrial-looking residential buildings on the opposite shore. And we were still within the boundaries of New York City, in Queens! Above us, a stream of planes passed steadily to land at Kennedy Airport. 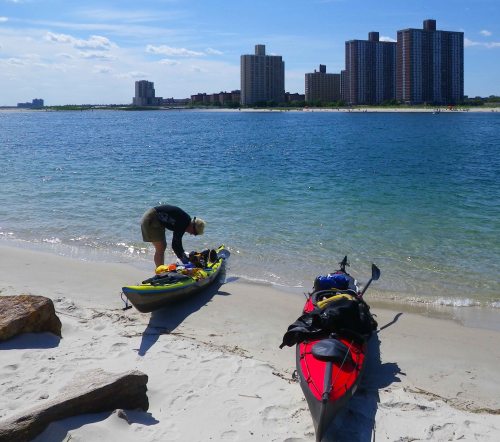 Landed for a late lunch in Rockaway Inlet 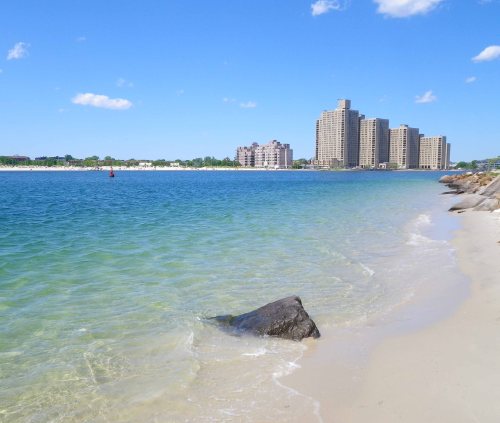 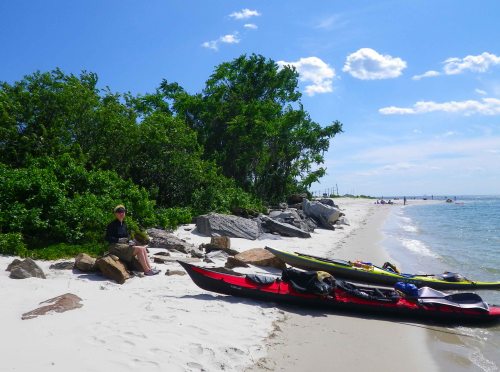 … you can almost see the palm trees

After lunch, we paddled under the Atlantic Beach Bridge, the first of many bridges connecting the barrier islands of Long Island to the mainland that we would pass under in the coming days, and into Hempstead Bay. 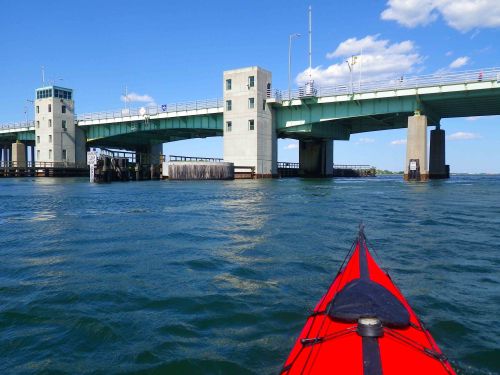 Under the vintage Atlantic Beach Bridge… 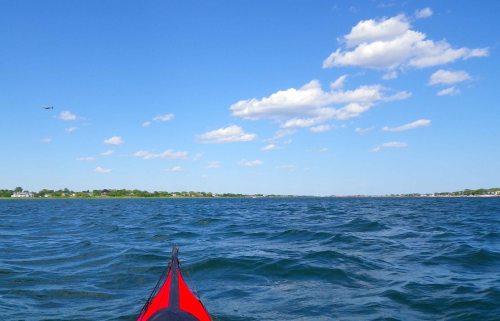 … into Hempstead Bay, as planes continue to wheel overhead

Beyond the bridge, Reynolds Channel, the first section of the intracoastal waterway, opened up. On our right, the south side of the channel, on the barrier island, was solidly built up, with houses right on the water, each with its motor boat, large or small, in the back yard. But the left, northern side was for long stretches undeveloped. Large islands (“hassocks”) of flat green grass, with occasional clumps of low trees sticking up, separated by meandering waterways, extended away to the horizon under a blue sky dotted with puffy white clouds. Hundreds of birds peered at us from the grass or wheeled overhead. We were amazed at these vast stretches of what seemed to be pristine wilderness—hardly what we’d anticipated just a few miles from Manhattan!

As there was a strong current flowing against us out of the bay, once we’d passed under the Atlantic Beach Bridge we crossed to the northern side of Reynolds Channel, where for the next few hours we paddled, largely out of the current, along the shallow southern edge of the marshland. 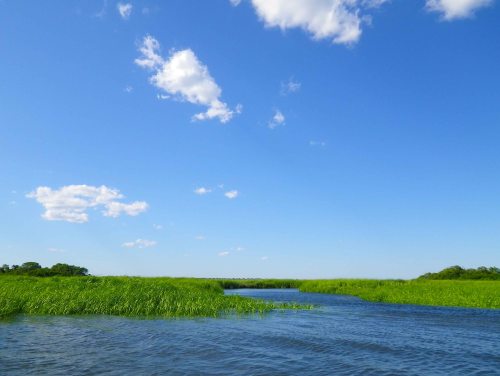 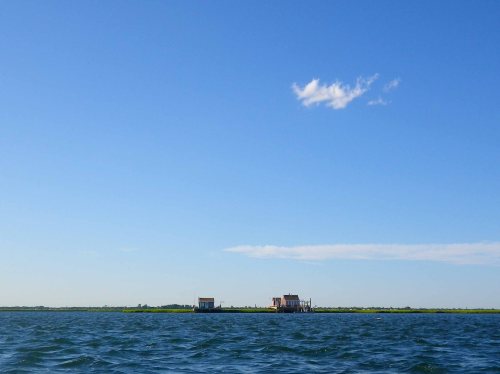 …with occasional houses on pilings… 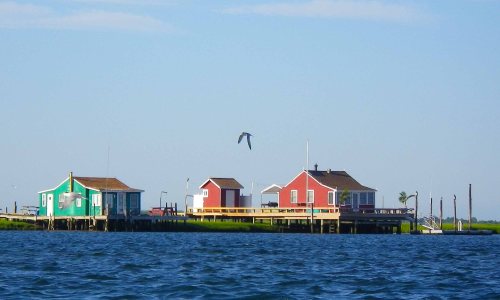 …that somehow reminded us of Scandinavia 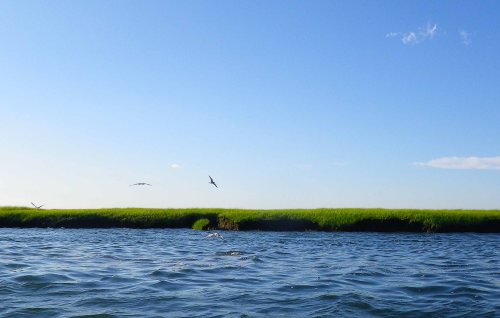 Finally, we began to feel current going our way—we were feeling the pull of the next inlet, Jones Inlet. (This pattern of currents, too, would repeat in the coming days as we passed further inlets.) As the sun sank low in the sky, we passed under the last bridge of the day and soon saw some serious commercial fishing boats, another sign that an inlet was very near. 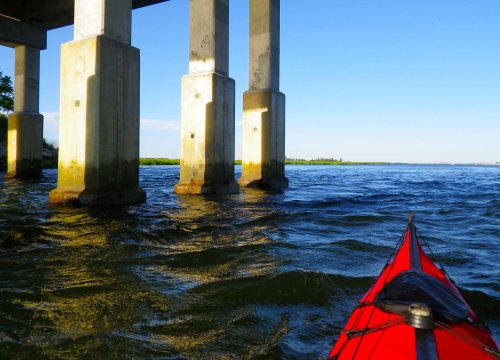 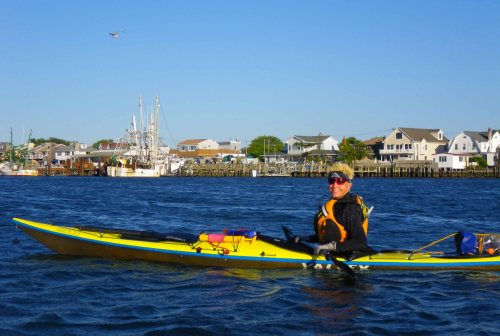 It was high time to look for a campsite for the night. In this area we had noted several possibilities by examining, before the trip, the satellite photos available on Google Maps, a nontraditional but, as it turned out, highly useful tool. 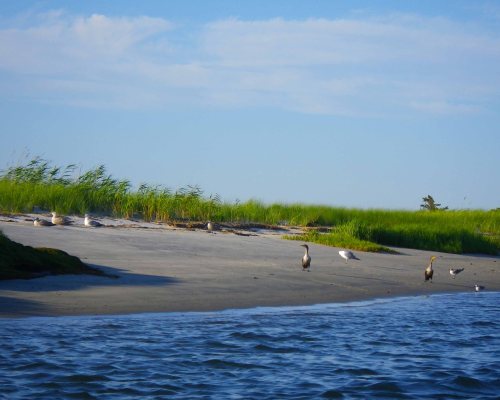 This beach was already occupied…

We settled on the third option we had checked out, a white sandy beach at the foot of a drawbridge, which we’re calling “Cable Crossing” (because that’s what a large nearby sign said)*.

Except for the persistent low hum of traffic crossing the bridge, the location seemed ideal. There were jetskiers nearby, but they left before sunset. The distant sandbars around Jones Inlet were still bathed in lavender light as, with the effort that soon would become only too familiar, we dragged our boats above the high-tide mark. 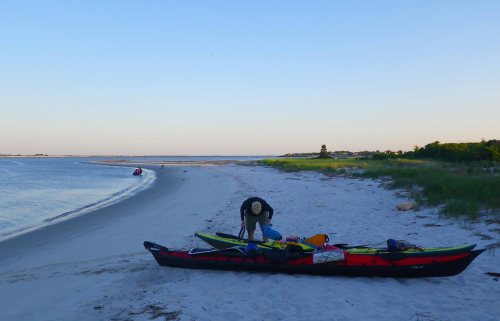 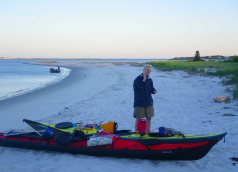 After the first necessities—applying DEET to ward off the biting insects that were already buzzing around unpleasantly, and making cocoa—we pitched our tent and cooked dinner as the twilight set in, congratulating ourselves on having successfully located our first, lovely guerrilla campsite. 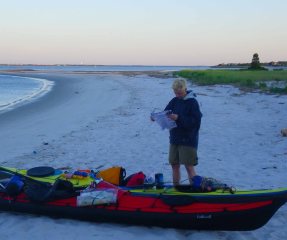 How does this thing work? — a new Jetboil 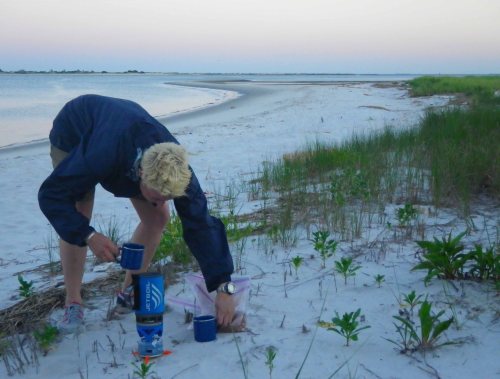 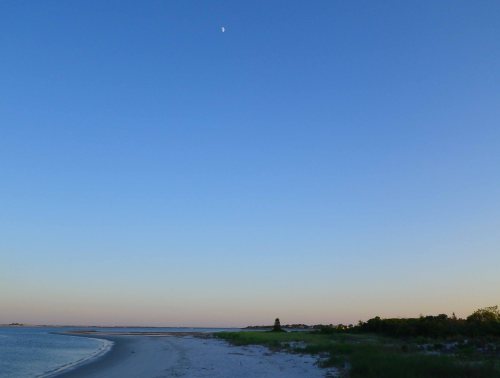 A final walk along the darkening beach under the moon—this is what camping is all about!

* This trip included several nights of “guerrilla camping”, i.e. in locations that aren’t officially-sanctioned campgrounds. To our knowledge, we didn’t camp on any private property, but rather in scraps of parkland and other public lands. But we aren’t giving the exact locations for two reasons: First, to avoid any belated citations from the authorities; and second, because we don’t want to give the idea that we magically located the only, or even the best, campsites. We saw numerous other potential campsites—to our surprise, guerrilla camping on Long Island, even at the height of the summer, turned out not be hard at all. Paddlers planning Long Island circumnavigations are most welcome to contact us directly for further specifics. Meanwhile, all names of campsites in these posts are those that we bestowed on them–you won’t find them on any charts.

46 responses to “Long Island Kayak Circumnavigation: Day 1—Off to The Rockaways!”