As we travel around New York Harbor in our kayaks, we see quite a bit of orange. Orange is, of course, the premier color for high visibility, and many warning signs, buoys, floating booms, parts of barges and ships, are bright orange.

But there is just one large boat in the harbor—actually, a whole fleet of them—that, from bow to stern, top to bottom, is entirely orange: the Staten Island Ferry.

White seems to be the most common color for ferries everywhere, and most other ferries in New York Harbor are white. Originally, the Staten Island Ferries were white, too. But in 1926 the color was changed, indeed to make the ferries more visible in fog and snow, to reddish-maroon, and then later to the present “municipal orange.” Today, the orange Staten Island Ferries are iconic—almost as iconic as the Statue of Liberty. 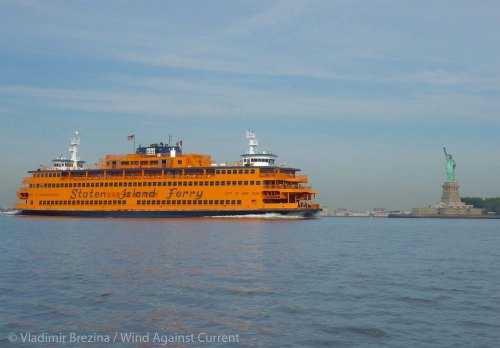 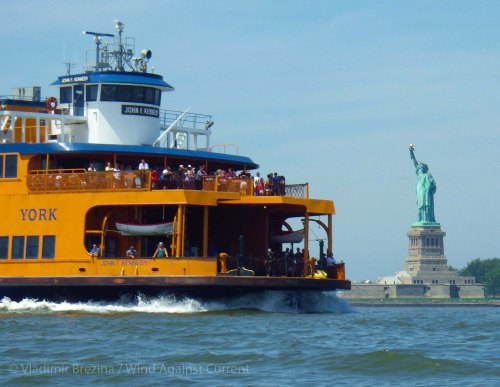 After a couple of close encounters, Johna is especially wary of the Staten Island Ferry. It’s hard to avoid it. We have to cross its path, sometimes twice, on almost every trip through the harbor. It moves fast and it always seems to be where we don’t want it to be.

And so, we are always scanning the water for that big orange boat.

Sometimes, we come upon it docked, with passengers still getting on, so we know we have at least a few minutes to sneak past and get safely out of its way before it departs.

Sometimes it’s too late—we have to wait. But it gives us a chance to admire the beast close up. 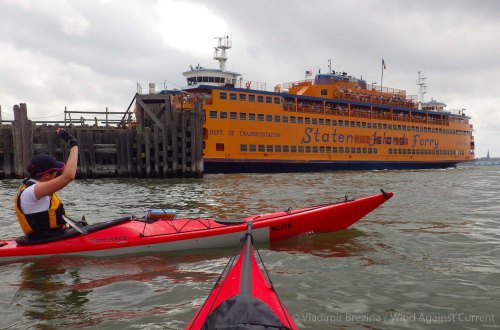 And sometimes, we have to rub our eyes and look again. A Staten Island Ferry coming down the East River? “A planet might as well leave its orbit.”

Fortunately, Johna has not developed a fear of other kinds of oranges…