Text and photos by Vladimir Brezina 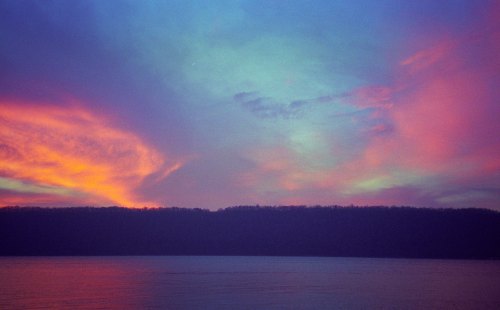 7:43 a.m. Metro-North train to Peekskill. Launched by 9:30 a.m. Hazy and windless morning; water like glass. Relatively warm for December (later in the day, temperature up to 60°F). (Note: The scientist in him, and also the world citizen, would always make a point of including units. Most Americans, and nearly all American nonscientists, would assume Fahrenheit to be understood.)

Paddled against flooding current (for first two hours) down to the entrance to Haverstraw Bay, then directly across to Croton Point. No wind at all, water like a mirror, reflecting sun struggling through banks of clouds at first, then becoming a steady diffuse bright glow in a pale blue sky, with outlines of opposite shore and Croton Point in front very hazy. Very few other boats: a few fishing motorboats and the usual tugs and barges; a couple of kayakers around Croton Point. 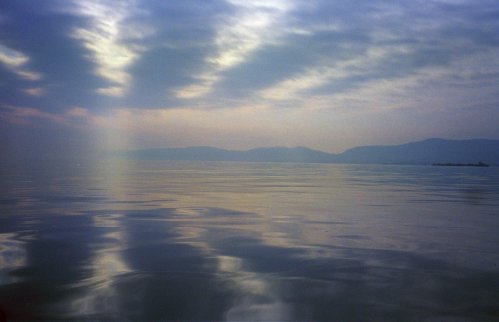 Tappan Zee in the mist

Past Croton Point around noon and south through the Tappan Zee. A mile or so north of the Tappan Zee Bridge wind suddenly picked up to 15-20 knots from the south. (Note: In later years, Vlad used to cite Murphy’s Law for paddlers, “The wind is always against you, no matter which direction you’re traveling.” It seems to be true surprisingly often. Perhaps it should be called “Brezina’s Law”?). Waves soon built up to 2 feet (wind now against ebbing current). Progress considerably slowed by the wind and waves. Stopped at Irvington around 2 p.m. to reassess situation (met another pair of kayakers, somewhat unprepared for the conditions), then down to Dobbs Ferry (another pair of kayakers). Wind gusts up to 20 knots, waves (not even in middle of channel) up to 4 feet. Larger waves much more pleasant, less bouncy, than short 2-foot chop. South to Yonkers; now (4 p.m.) sun setting behind orange and blood red clouds, soon to be dark, so took out. Train back to New York. (Note: This entry is very close to home as Brian, Vlad’s former student, and I paddled from Yonkers to Croton Point and back this past Sunday—under very different conditions. It was warm, sunny, and just enough bounce to be fun. It’s also interesting to note Vlad’s decision to take out. In later years he might well have opted to continue on, as he had no issues with paddling at night, and four-foot waves were less intimidating. That said, he clearly made the right decision for his level of expertise. That sensible quality stayed with him all his life.)