With the ability to paddle

through the shallowest water and the narrowest gap between rocks and pilings, and the motivation to poke into obscure corners, a kayaker sees things in New York Harbor that those on larger boats miss.  Most affecting—because they too were once alive—are the remains of the vessels that at one time or another were left in an out-of-the-way corner of the harbor and never moved again.  Here are three such places: 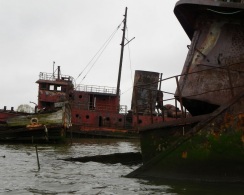 The Graveyard of Ships is tucked away in a bend of the Arthur Kill, the busy commercial waterway at the back of Staten Island facing New Jersey, at Rossville.  With a colorful history stretching back to the 1930s, at one time the Graveyard contained the remains of over 400 vessels, some more than a century old.

Even today, the Graveyard is a maze of half-submerged tugs and ferries whose flooded open decks one can paddle through.  Especially on a raw gray day, paddling through the Graveyard is an eerie, unsettling experience, gliding silently past rusted plates and over unidentifiable twisted metal things just glimpsed under the surface… 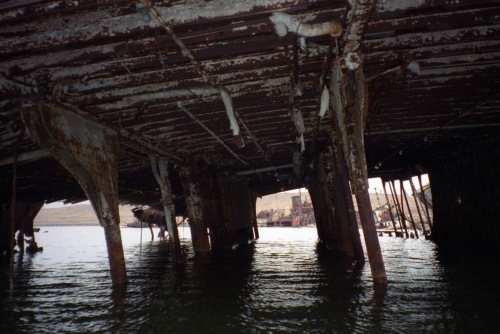 But with each trip to the Graveyard, we see fewer and fewer of the old favorites, as they are broken up for scrap or simply yield to the forces of nature.  In the meantime, geese nest in the ruins, and trees sprout from the decaying wooden barges.  Left to itself, the Graveyard would one day merge again into the landscape, just like the rolling hills of another, adjacent dump, the Fresh Kills Landfill…

Nature is reasserting itself… The hills of the Fresh Kills Landfill are in the distance.

Outside the Graveyard proper, there are numerous additional wrecks scattered in odd corners along the Arthur Kill.  Across the Kill from the Graveyard is Major General William H. Hart, not yet very far advanced in decay… 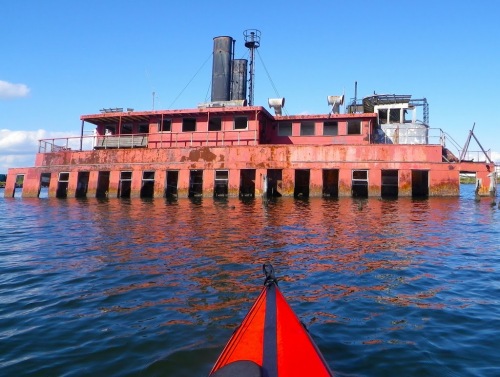 The Graveyard of Ships is a popular kayaking destination (reports and photos by Frogma, Darren Caffery, and Tugster, who identifies many of the wrecks) as well as a magnet for brave land photographers (Opacity, Undercity).  More of Vlad’s photos of the Graveyard of Ships and other wrecks of the Arthur Kill are here, here, and here.

2. The Yellow Submarine of Brooklyn

Half-submerged in the shallow waters of Coney Island Creek there lies… a submarine.  It’s not exactly like this

: it is a surprisingly serious submarine. 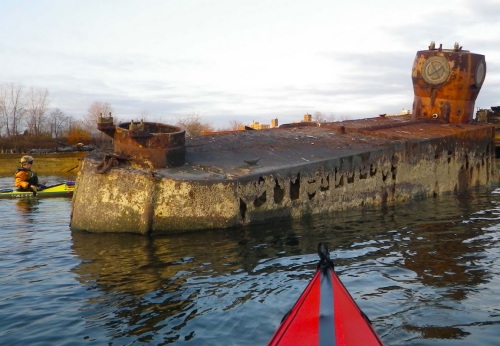 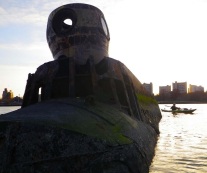 And it was built by a Brooklyn Navy Yard ship fitter named Jerry Bianco for a serious mission: To raise the Andrea Doria, an Italian luxury liner that in 1956 collided in fog with the liner Stockholm and sank off Nantucket.  The story is well told in Forgotten NY:

The Andrea Doria was known to be bountifully loaded with such diverse items as a $250,000 solid silver statue of a mermaid; thousands of cases of liquor; tons of provolone cheese; 200,000 pieces of mail that the federal government would pay 26 cents a piece for; the ship’s bronze propellers, worth $30,000 each, paintings locked in air-tight vaults; industrial diamonds; the ship’s $6 million metal scrap value; passengers’ personal property left in several vaults and more.

Bianco believed he could build a vessel strong enough to descend to 240 feet of water, where the liner rests at the bottom off Nantucket, and could actually raise the sunken vessel by filling it with inflatable dunnage bags; when filled, the bags would lift it off the bottom or to the surface — or so the theory went.

Lest this sound crazy, Bianco did succeed in forming a corporation, selling stock, raising more than $300,000, and building a 40-foot, 83-ton submarine that passed Coast Guard inspection with flying colors, and, in October 1970, was ready to be launched.

But for want of a nail…  Bianco was chronically short of money (the yellow paint of the submarine, some of which remains today, was the cheapest he could find).  Because the launch was to be paid for by the pound, he did not ballast the submarine fully, and it capsized upon being lowered into Coney Island Creek.

And there it has remained ever since. 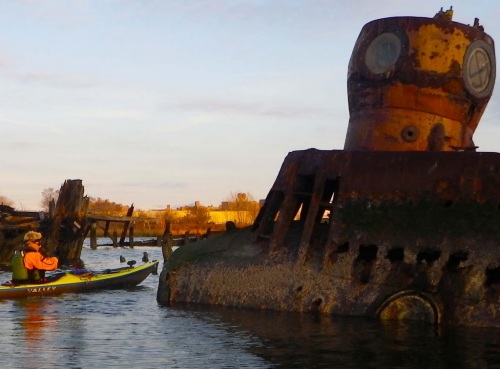 More of Vlad’s photos of the Yellow Submarine are here.

Update (October 9, 2011): The “Forgotten NY” page has apparently disappeared, but here is a New York Times article instead.

At the border between Brooklyn and Queens, Newtown Creek zig-zags for several miles inland from the East River, becoming narrower and more tortuous and spanned by numerous low bridges.  So we were very surprised to find, on a recent kayak expedition into the Creek, in one of its terminal branches a large ship… Schamonchi. 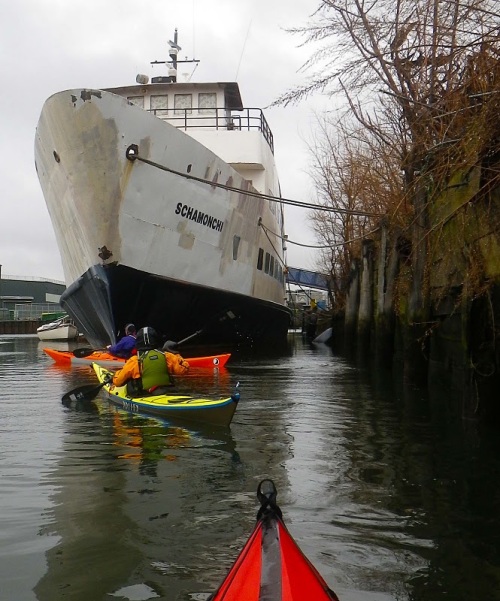 Schamonchi proves to be an ex-Martha’s Vineyard ferry, sold in 2005 to a New York company to be refurbished as a party boat.  But plans apparently went awry, and Schamonchi has now retreated from a respectable mooring near the mouth of Newtown Creek to its furthest extremity, and appears to be used as an immobile houseboat.  So, although Schamonchi still supports life and even parties, the writing is beginning to appear on the wall…

More of Vlad’s photos of Schamonchi are here.