Questionable Facelift for a Beauty

By Johna Till Johnson
(Additional material contributed by Vladimir Brezina)

But I neglected to mention something in that post. Not because I’d forgotten, but because I don’t like to think about it: Current plans are for the Bayonne Bridge to undergo a structural makeover.

The roadbed of the bridge is being raised from 151 feet at high tide to 215 feet to accommodate the new generation of post-Panamax container ships. 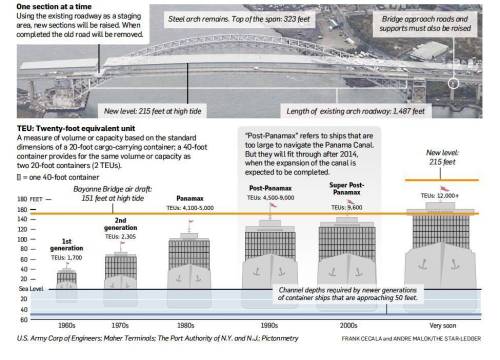 Why is this happening? As the graphic shows, container ships are growing to huge proportions—much larger than was even remotely foreseen in 1931 when the Bayonne Bridge opened.  But until now, the size of these ships has been limited by their need to fit through the Panama Canal. This “Panamax” generation of ships still fits under the Bayonne Bridge (although barely, as Tugster has documented here and here and here).

But now the Panama Canal is being widened. When the widening is completed—very soon, in 2014—a new generation of post-Panamax ships will roam the world. These larger ships will go wherever ports can accommodate them. And right now, because these ships can’t fit under the Bayonne Bridge, this won’t include New York’s main container terminals in Port Newark / Elizabeth.

(To accommodate these huge ships under the water, the Kill van Kull also has to be dredged, but this work, although expensive, is relatively straightforward, and is already well advanced. )

The makeover of the Bayonne Bridge is therefore absolutely essential to the economic health of the New York-area shipping industry. As a New Yorker, I support it—I don’t want to see New York degenerate into a picturesque relic of times gone by, which is what happens when conservation trumps innovation.

And I cherish the nothing-is-sacred mentality of New York authorities when it comes to staying alive and competitive.

Nonetheless, the change breaks my heart. Because although the graceful steel arch will remain unchanged, the proportions of the new Bayonne Bridge will be all wrong. Instead of a graceful parabola arcing majestically through the roadbed, the new bridge will be a tiny crescent slice sitting high above the water. (Notice the cleverly photoshopped container ship in the background of the “Future” picture!)

Although the redesign is functionally and economically necessary (and fascinating from an engineering perspective), the end result will lack Gustav Lindenthal‘s “pursuit for perfection and his love of art.”

Alternative solutions were considered: A tunnel under the Kill van Kull, or even a completely new bridge next to the Bayonne Bridge, which would have had its roadbed removed, leaving just the steel arch “in a nod to local and architectural history”. But these other options have now been rejected as more expensive and time-consuming.

Even the planned makeover of the Bayonne Bridge will cost at least $1.32 billion and take at least nine years to complete.  With the dickering of local politicians, though, the start date has not even been set, while the post-Panamax date of 2014 looms…

So if you want to see the Bayonne Bridge in all her perfect glory, as her creators intended—you still have some time. But go soon.

14 responses to “Questionable Facelift for a Beauty”