“It’s All About the Joy” 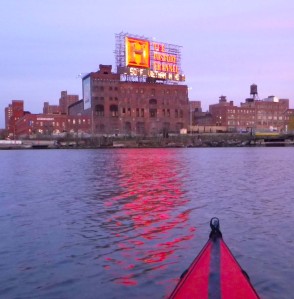 Do you ever have those days where you just don’t feel like finishing what you start? I do, but not usually when it comes to kayaking.

But that’s how I felt on a recent Saturday afternoon. It was a warm autumn day, and we’d planned a fast Manhattan circumnavigation, heading around the island clockwise, rather than the more usual counterclockwise. Starting from Pier 40, a clockwise circumnavigation is usually faster than a counterclockwise one because you can catch faster current in all three main legs of the trip—up the Hudson River (about 11 miles), down the Harlem river (about 8), and down the East River (another 8), leaving you fighting the current only at the very tail end (from the Battery back up to Pier 40).

If the stars align right—and wind and currents fall into place—a reasonably fast paddler can finish a clockwise circumnavigation in under five hours. Racers can do it in three-and-change.

But nothing was aligning for me this particular day. I’d been sick the day before, and was still feeling the effects. I was dehydrated and tired from lack of sleep. And this was the maiden voyage of my brand-new drysuit, provided by Kokotat as a (free!) replacement for the one that had delaminated after four years of serious wear-and-tear.

If you’re a drysuit-wearer, you’re probably familiar with that “new drysuit” feeling: the neck gasket is tight enough to choke you, and you feel you can’t quite catch your breath. And if it’s even slightly warm—as it was that day—the heat inside the suit leads to a feeling of suffocation.

True, we couldn’t have asked for better conditions. The wind was a solid south-southwest, pushing us up the Hudson with the current. And the sky was clear and bright, with gentle afternoon sunshine.

Toward the George Washington Bridge

Unfortunately we got something of a late start, and by the time we’d reached the George Washington Bridge, the current was weakening. As I slogged up the Hudson, I had the strongest possible feeling that this was a stupid idea, that I wasn’t going to have any fun. That the trip was possibly dangerous, even. I was paddling badly: hacking at the water in short strokes and having to brace more often than the conditions really warranted..

The Columbia “C” in Spuyten Duyvil

.
But as we went under the railroad bridge into Spuyten Duyvil, the autumn sunshine and smell of dry leaves revived my spirits somewhat, and I began thinking this trip might be okay after all..

Under the University Heights Bridge in the Harlem River

About halfway down the Harlem River the current had fully turned against us. I put my back into paddling and moved over to the edge of the waterway, where the contrary current was weaker. Even against the current, I was keeping a good 3-knot pace, watching the stone walls slip by.

As we came around a bend, I saw a cluster of folks standing by the railings. Suddenly they started gesturing wildly—they were fishermen, and I was about to run into their lines. I nodded emphatically to show I understood and veered out into the center of the river.

They smiled and waved their thanks. One of them yelled out, “Staying warm?” Me: “Toasty! Catching any fish?” His response: “Oh yeah!” 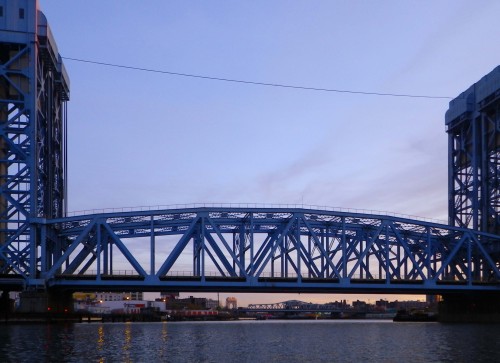 Next, I saw a guy about my age walking a dog along the river. His face lit up as I paddled past. We exchanged greetings, and he said: “I would love to do that!”

“You can!” I said, and told him about the free kayaking at Pier 40 in the summer, and about NY Kayak Company. “I will do that!” he said, and sounded as if he meant it. I liked the thought that, just possibly, I’d recruited a new person into the sport of urban kayaking.

The History Channel sign, near the bottom of the Harlem River

A bit later on, just before the Harlem empties into the East River, we rafted up for a break.  My fingers were cold (for the first time all day) but we’d made hot tea with plenty of lemon and sugar, and I began feeling a little better.

As the sun set in a blaze of purple and orange, we paddled along the last stretch of the Harlem River. The Hell Gate Bridge appeared as we rounded the final bend, then gradually faded into darkness as dusk fell over Manhattan. The lights of the Triborough Bridge winked on as I caught my last glimpse of the Hell Gate Bridge, its black curves traced against the gloom.

By the time we were ready to cross the first strong eddyline right before Mill Rock—the East River ebb was now in full swing—it was nearly dark.  The usual illusion of paddling faster kicked in. I concentrated on maintaining my balance and staying relaxed as we sliced through the churning water, at the same time keeping an eye on the red and green lights of a couple of large vessels that seemed to be heading in our general direction.

Then we caught sight of an official-looking boat, blue lights flashing, racing towards us. At first we thought it was the police, but it turned out to be a Coast Guard boat. It pulled alongside us. “Where are you headed?” one of the officers asked. “To Pier 40,” Vlad replied. “Oh, okay,” was the noncommittal—perhaps surprised—response.

As we headed down the East River, on the Manhattan side of Roosevelt Island, the boat stayed watchfully alongside us. I was just wondering why when the two larger vessels emerged out of the gloom, both in the channel to our left.

One was a DEP sludge boat, heading upriver. The other was a barge, heading downriver. To get out of their way, we would normally have paddled a little closer to the Manhattan seawall to our right, but we couldn’t because the Coast Guard boat was there.

As usual, I was listening to the radio, and caught the following exchange:

First captain (in a calm, even voice):   “There are a couple of kayakers coming down the channel. I don’t know what they’re doing there, but I just wanted to give you a heads up.”

Second captain: “Oh yeah.. It’s all about the joy.”

It’s all about the joy? What did he mean by that? I turned the question over in my head as the ships glided past. The Coat Guard vessel zoomed off into the darkness, its work done. And we  zipped down the East River, buoyed by the accelerating current.

We worked our way past the East River ferry terminals, first the one at 34th street and then the one at 25th street, where a brightly illuminated party boat shot out unexpectedly in front of our noses. Then we dodged the yellow Water Taxis emerging from the South Street Seaport and rounded the bend of the Battery. The Staten Island Ferry was docked, and we anxiously watched the passengers getting on the brightly illuminated boat as we paddled in the darkness past its stern just before it departed.

Then we pushed on up the Hudson, against the current once more.  There were wind-driven swells at my back, and I was paddling slowly and badly again, with an unexpected pain in one shoulder.

But despite all that, I was drinking in the sight of the lights across the water, the smell of the cool evening air. I never tire of the jagged Jersey City skyline, with the red “Erie Lackawanna” sign that’s now sadly reduced to “Eri Ackawan”.

As we pulled into the gentle waters of the Pier 40 embayment, I thought to myself that the captain was right. No matter what unexpected obstacles come your way—an overheated drysuit, a bad paddling day, or a couple of errant kayakers—it’s all about the joy.