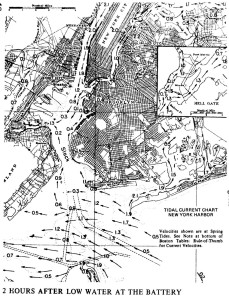 I’ve paddled in New York Harbor quite a bit, and other kayakers often ask my advice on the timing of their trips through this tidal waterway. They say things like, “We are planning a trip from Pier 40 down to Swinburne Island to see the seals, like you did last year, and we are thinking that January 8 might be a good day to go. High tide at the Battery is at 7:13 a.m. that day. So, when do you think we should leave?” And I have to reply, “I have no idea.”

I have no idea because the time of high tide at the Battery does not immediately tell me much. I think in terms of current, not tide.

Of course, knowing about the height of the water can be very useful, even critical in some parts of the world. Regions such as the Bay of Fundy have a huge tidal range, and it’s certainly good to know whether it’s high or low tide when setting up camp after dark on the shore… Launching and landing may only be possible at certain states of the tide. Elsewhere, one can get stranded on miles of sand or mud at low tide :-)

But New York Harbor is not one of those places. The tidal range is small, and most of the time we launch from and land on floating docks anyway. On many trips, I am reminded that it’s low or high tide only at the end of the trip when I face an unexpectedly steep, or shallow, climb up the ramp from the floating dock to the pier. Until then, it really wasn’t that important.

Of course, the kayakers who ask my advice know all this. When they look up the time of high tide at the Battery, they really want to use that time as an index to the timing of the currents.

But that’s where things get tricky.

In a bay or estuary with a simple shape—as described, for example, in Burch’s Fundamentals of Kayak Navigation, a book that I will write about more in a future post—the tidal height might indeed predict the tidal currents in the way one might suppose. From the time of low tide to the time of high tide, the current would be flooding into the bay or estuary. And from high to low tide, it would be ebbing back out to sea.

Not so in the complex waterways of New York Harbor. Here, the currents swirl in very complicated directions. The current in the Hudson River lags behind the currents in the East and Harlem Rivers, so that there are hours in the tidal cycle when (as shown for example in the chart below) the current is ebbing to the west of the Battery while simultaneously flooding to the east of it, or vice versa. The Harlem River flows the “wrong” way, ebbing north and flooding south. And so on…

Because the currents in New York Harbor are so complicated, the Federal Government once upon a time published this set of twelve current charts for the harbor, one chart for each hour of the tidal cycle. Eldridge Tide and Pilot Book has reprinted these charts in each of its yearly editions for many years. Here I’ve scanned the charts from Eldridge (they are also available here). 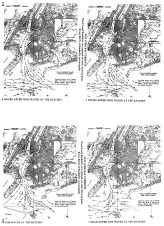 Possibly partly for this reason, but mostly because the charts were constructed from relatively sparse measurements of the actual currents, the details of the current flows shown on these charts have to be taken with a grain of salt. (In fact, it is my understanding that the charts were eventually withdrawn by the Government as inaccuracies were found.) Furthermore, the details can be completely swamped on any particular day by such factors as runoff or wind. But the big picture is accurate enough, in my experience.

Much the same can be said about another, more modern resource that does a similar job with respect to currents and which some kayakers use instead, the tidal current prediction model maintained by the Center for Maritime Systems at the Stevens Institute of Technology.

When I first started kayaking in New York Harbor, I referred to the tidal current charts often. But now that I’ve internalized their main features, I’ve largely laid them aside in favor of a much simpler method for timing my kayak trips.

To get a perfectly adequate overview of what the currents are doing on any particular day, it’s really only necessary to know the times of slack current—the time of the change from flood to ebb, or vice versa—at several key locations in the harbor.

Between the successive times of slack current, of course, the current is alternately flooding or ebbing at these three locations, and therefore in the entire stretches of waterway that they represent. And, for most kayak trips in New York Harbor, that’s all it is necessary to know.

The times of slack current have, furthermore,  a special logistical significance. On there-and-back trips, I plan to arrive at my turn-around point at the time of slack current, so that the current takes me there and, once it has turned, takes me right back. And on a Manhattan circumnavigation, reaching Hell Gate as the current changes from flood to ebb is critical for a smooth current-assisted passage around the island.

So it’s sufficient to partition New York Harbor into its major waterways, and know when each waterway is ebbing or flooding. That’s actually how another popular local trip-planning device, the tide wheel, works. But the tide wheel is still indexed to the time of high (or low) tide at the Battery, as are the tidal current charts above. Both of these are still really tide-to-current conversion devices.

But nowadays, online resources make it just as easy to look up the predicted times of currents as of tides (albeit for fewer locations). So why look up the times of tides and then translate to currents? Why not look up the currents directly? So that’s what I do.

I use this site. (There are others, but I believe that they all make predictions based on the same underlying data derived ultimately, in the U.S., from NOS/NOAA, which makes its own tide and current predictions as well.) Here is the site’s listing for the U.S. Upper East Coast.

The site has a few idiosyncrasies. For example, locations are listed in strict order of latitude, completely ignoring longitude. So a location on the Hudson might be right next to another in Long Island Sound or even on Cape Cod. Furthermore, there are several different predictions for Hell Gate, for instance, based on different sets of measurements that have been made at slightly different locations within Hell Gate over the years.

That said, here are the locations that have worked for me for many years:

(And the tide at the Battery—if you really want to look it up—is here.)

So what about that trip from Pier 40 down to Swinburne Island to see the seals on January 8 (2012)? Slack current at the relevant location, the Verrazano Narrows, with the current changing from ebb to flood as required for this trip, is at 4:08 p.m. That’s all I would need to know.  I would leave Pier 40 around 1 p.m. Carried by the ebb current, in a couple of hours I would reach the Narrows and soon thereafter Swinburne Island, leaving plenty of time to look at seals while the current changed to the flood that would carry me (although now in the dark on this short winter day) back home again.