98, to be exact: The bridge first opened on September 30, 1916. I’ve written about my love for the Hell Gate three years ago, in my birthday greetings to the Bayonne Bridge.

But it’s worth summarizing again why I feel so strongly about the Hell Gate. As I wrote then:

I love bridges. I’m not entirely sure why. Partly it’s the look of them: They seem almost alive, taking off in a leap of concrete, stone, or steel,  somehow infinitely optimistic and everlastingly hopeful. Partly it’s their function: Bringing things together, connecting people and places that were previously divided. And of course, bridges often cross moving water—another of my favorite things.

But though I love them all, some bridges in particular hold a special place in my heart.

Many years ago I worked north of New York City (in Connecticut and later in White Plains). The hours were grueling—some days I’d leave my apartment at 5 AM and not return until 11 PM. Sometimes I drove, but I preferred to take the Metro-North train. I relished the peacefulness of the scenery rolling by.

As we crossed the Harlem River, I’d catch sight of one bridge in particular, a study in contrasts: graceful, soaring, yet solid, composed of two steel arches with slightly different curvatures, so they were closer together at the top of the arch and wider apart at the bases, anchored in solid stone towers.

The rising sun would touch this bridge and (so I thought) paint it a lovely shade of rosy pink.  The memory of that beauty was often the nicest part of my day. 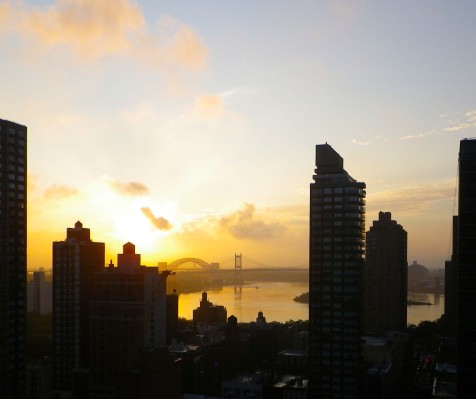 Hell Gate Bridge at sunrise, seen from our window

But for years, I didn’t know what the bridge was called, or even where, exactly, it was. All I knew was that the sight of it reliably brightened my mornings.

One day I happened to mention the bridge to my father, a retired naval officer who had once been stationed in New York City, but now lived hundreds of miles away.

He recognized it immediately from my description: “That’s Hell Gate Bridge,” he said. An odd name for a structure of such harmonious beauty! I hadn’t heard of Hell Gate before, and my dad explained it was where the Harlem River joined the East River. Hell Gate was a treacherous body of water characterized by converging currents and occasional whirlpools that had been the doom of hundreds of ships over the past several centuries.

“As a young ensign, I was on a ship that went through Hell Gate,” my father said. “But I don’t recall that the bridge was pink.” That would have been in the late 1940s; I can’t recall for certain what kind of ship he told me it was, but my memory insists it was a destroyer.

Many years later, I’ll not forget the thrill I had the first time I passed under the bridge, in a far different vessel: My trusty yellow kayak, Photon.

We paddle under the Hell Gate Bridge (photo by Johna)

As for the bridge’s color, I later learned my dad was right. The bridge was painted “pink” (actually a color called Hell Gate Red) only in 1996—but the paint has faded to a pastel rose, as you can see.

When doing further research, I learned that:

I also learned that the Hell Gate Bridge was so perfectly engineered that when the main span was lifted into place, the adjustment required was a mere half-inch!

Happy birthday, you beautiful creature. You haven’t aged a bit!

… And Once More to Long Island Sound

On Sunday, the currents were right for a kayak trip through the East River out to Long Island Sound. Here is a slideshow of the highlights:

Last night, as a lavender dusk settled over Hell Gate 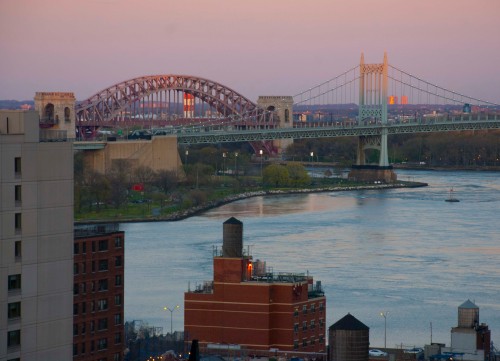 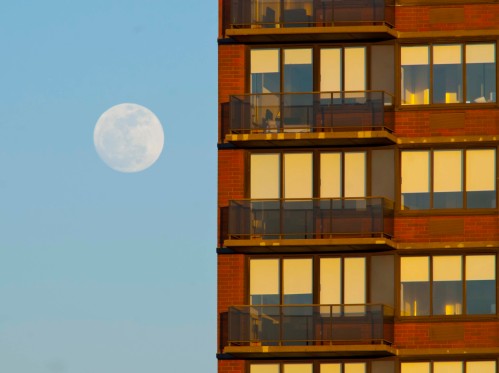 then shone white in the deepening blue sky 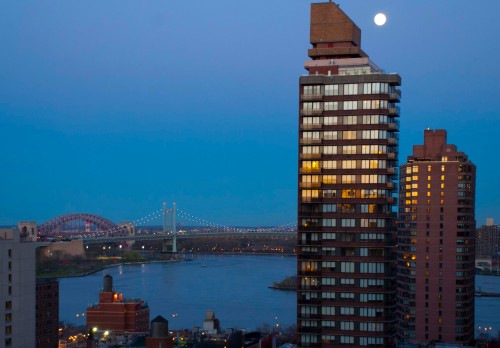 as the bright lights of the Second Avenue construction came on

How to Paddle Through Hell Gate Against the Current

The Manhattan circumnavigation is a classic New York City kayak trip. Hundreds of paddlers do it every year. For a 30-mile trip, it’s surprisingly easy, largely because the strong tidal currents that swirl around Manhattan do much of the work.

To use the currents instead of fighting them, though, it’s important to time the trip right. The key is the correct timing of the passage through Hell Gate. When going around Manhattan counterclockwise (the more usual direction), you want to reach Hell Gate at, or before, the turn of the current from flood to ebb, so as to ride the flood current up the East River, and then the ebb current up the Harlem River.

But what if, for whatever reason, you are late, and find yourself facing a growing ebb current while still  in the East River short of Hell Gate? The contrary current slows you down, building more strongly all the while… And the ebb current in the East River can build up to 5 knots or more—faster than most paddlers can paddle.

Not quite. It turns out there’s a way to paddle through Hell Gate against the current, and even use the contrary current to advantage.

Here’s how we do it.

END_OF_DOCUMENT_TOKEN_TO_BE_REPLACED

These tropical storms have certainly stirred things up! Hurricane Irene came through ten days ago and deluged the entire region, and a couple of days ago Tropical Storm Lee repeated the performance. This morning, looking out of the window on Manhattan’s Upper East Side, we saw a strange sight in Hell Gate…

END_OF_DOCUMENT_TOKEN_TO_BE_REPLACED

Now that Johna and I are back from our New England kayaking trip (photos here, writeup still to come), it’s back to my regular old paddling routine in New York Harbor.

Here’s an account of one of my standard trips, written up a long time ago for the September/October 2003 issue of ANorAK, the Journal of the Association of North Atlantic Kayakers (a journal now defunct).  Rereading this account, I see that things haven’t changed much over the past decade. There’s mention of sewage, for instance…

In essence, the trip is a 50-nautical-mile circumnavigation of Manhattan with a side excursion into Long Island Sound, looping around City and Hart Islands. I developed this trip for those days when the timing of the tidal currents is such that the East River starts flooding in the early morning, just as I am launching from Pier 40 in lower Manhattan. Following the flood current up the East River soon gets me to Hell Gate, where I am faced with the choice of paddling against the current then coming down the Harlem River, or continuing with the current through Hell Gate into the Upper East River and out into Long Island Sound.  Being lazy, of course I choose the second option, returning to Hell Gate to resume the Manhattan circumnavigation only when the current has turned so that it will push me up the Harlem River. (As a bonus, I get to paddle through Hell Gate both ways at the peak of the current, sometimes boiling along at five or six knots, which can be interesting…)