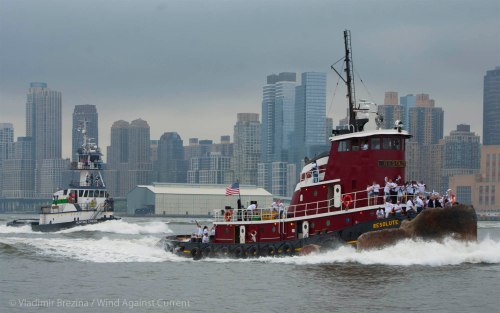 Last year, on the spur of the moment, we attended our first-ever Great North River Tugboat Race & Competition (see the writeup, “We’re Off to the (Tugboat) Races!”).

We were stunned, blown away, and delighted by the experience.

So it’s only natural that this year, we were conflicted. On the one hand, we were eager to go again; on the other hand, how could it possibly live up to the previous time? 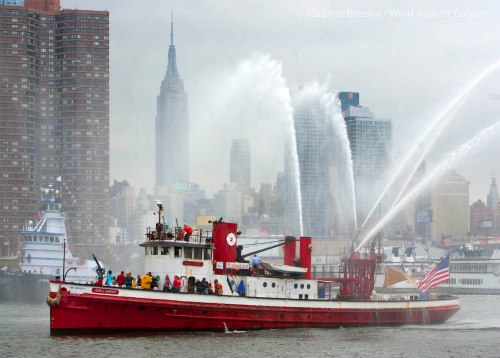 Not only was the weather perfect (cool and cloudy) but the competition was cast right out of Hollywood: It was clear from the get-go that the real contest in this year’s event would be between the gloriously retro red Resolute and the ultra-modern white Red Hook. Both are gorgeous boats, with stalwart crews. And even though the Resolute won the actual race, the Red Hook picked up a number of awards—including the surprise twist of its captain winning the spinach-eating contest!

Another notable first was this year’s winning mascot—the first-ever donkey in the event. It was Buddy, the Debora Miller‘s mascot, and it placidly munched hay throughout the entire event—on its perch three stories up.

Retelling the narrative from start to finish is beyond the capacity of this blogger. So, let’s go straight to the photos (click on any photo to start a slideshow).

1. The tugs arrive and the fireboat John J. Harvey leads the parade of tugs up the Hudson River:

The tugs arrive from downriver

… and await the start

A splash of color

The parade up the river begins 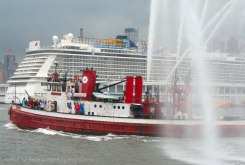 The “John J. Harvey” sweeps past 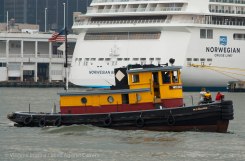 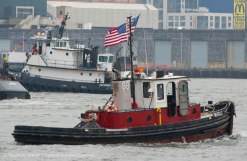 Red against the gray skies

The “John J. Harvey” sends up graceful arcs of water

… as she stands off in the middle of the river

The “W. O. Decker” brings up the rear 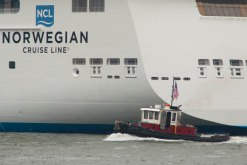 The tug parade heads on up the river 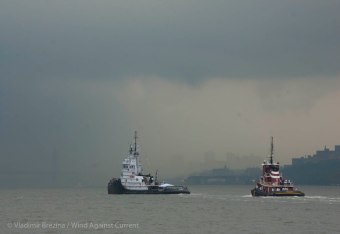 … for the start of the race

The tugs turn around

The tugs line up for the start of the race

And they are off!

The “Resolute” and the “Hunting Creek” compete

The “Tasman Sea” throws up quite a wave

The “Resolute” forges ahead

… and overtakes the “Hunting Creek”

Behind, the “Hunting Creek” and the “Peter F. Gellatly” compete for second place

The tugs sweep past to the finish 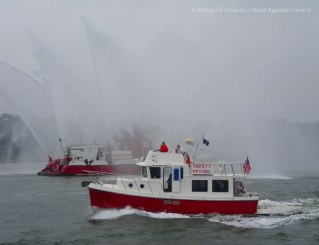 The “Tasman Sea” comes up 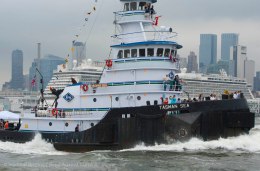 … the biggest boat in the race 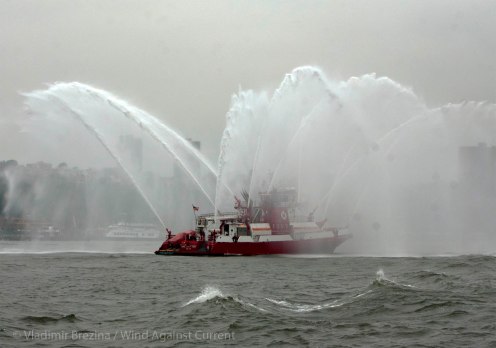 The race is over 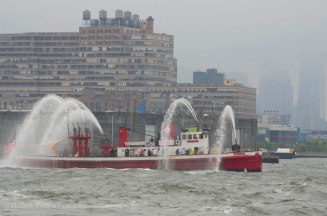 The “John J. Harvey” poops out

The tugs return to the finish line

A Miller contest: the “Susan Miller” versus the “Catherine C. Miller”

The “Tasman Sea” looks for victims

Another Miller contest: the “Freddie K. Miller” versus the “Debora Miller”

Downriver, the Statue of Liberty

The Miller tugs are still at it

The two biggest ones: “Resolute” versus the “Tasman Sea”

The “Susan Miller” cruises past

And what’s this on the top deck? 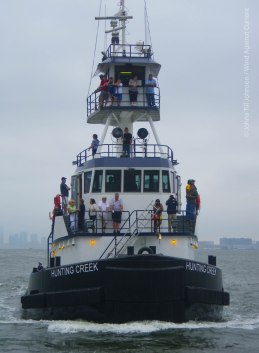 The business end of “Hunting Creek” (photo by Johna)

All this against the background of the city

Gingerly, the two tiny–and old and fragile–tugs, the “W. O. Decker” and the “Seagus”, nudge each other 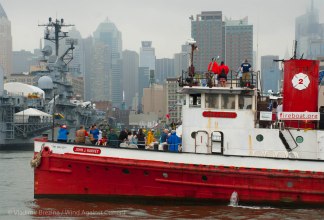 Now the “John J. Harvey” can take it easy

… she’s by far the most colorful vessel in the event

The “Susan Miller” heads in 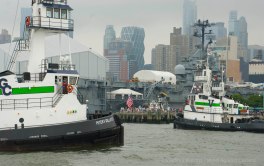 4. The tugs tie up at Pier 84 for the land-based contests:

The tugs tie up

Getting off can be tricky 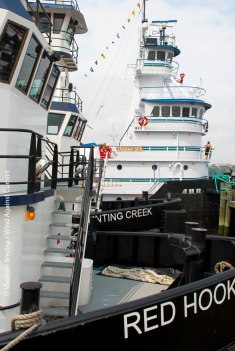 Friends and family relax on the back decks

… and a third, tense before the start (it’s a serious business)…

Approximately 12 seconds later, Joe is well satisfied with his meal 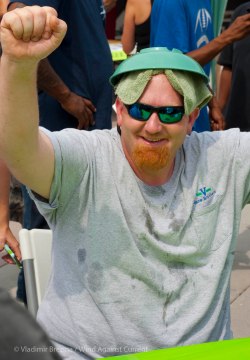 And he is the winner!

6. And finally, the one we’d all been waiting for—the tattoo competition!

The lady judges start their work

All this requires VERY careful examination

A last-minute attempt at bribery

And we have a winner!!

That’s it, folks—it’s all over, until next year!

The official race and competition results are here.

Many other photographers, present on shore, on attending boats, and on some of the tugs themselves, have also posted great photos and videos of the event. Here are some of them: