The travel site TravelSupermarket is running a contest to Capture the Colour.

“They say a picture paints a thousand words. Well, rather than asking you to write a five thousand word blog post, we’re inviting you to produce a blog post with up to 5 photos that really do ‘Capture the Colour’… the 5 colours Blue, Green, Yellow, White and Red.”

We’ve been nominated to take part by Autumn in Bruges and also by Untitled Adventure. Thanks so much to both, and do check out their wonderful colors at the foregoing links!

Here are our five colors:

Blue twilight closes in on the frozen Central Park Reservoir in New York City, while on the other side the ramparts of the Upper East Side still reflect the last afterglow of the sunset. February 8, 2010. A few more photos from that day are here.

We passed this metal recycling facility while kayaking along the Bronx River in New York City on July 2, 2011. Who says that industrial equipment can’t be brilliantly colored, apparently just for the fun of it? Apart from this vivid green, we saw some wonderful reds and blues. More photos are here, and the story of our trip is here.

Update, September 3, 2012: Michel, the founder of TravelNotes.org, has included this photo among his best 11 Green photos!

Heavy snowfall in New York City’s Central Park on January 27, 2011. The photographers were out in force, photographing ducks congregating around the last patch of unfrozen pond water. Against the pristine white snow, the ducks stood out in brilliant colors. As did some of the photographers! A vivid reminder why yellow is a good color to wear if you want to be noticed… More photos are here. 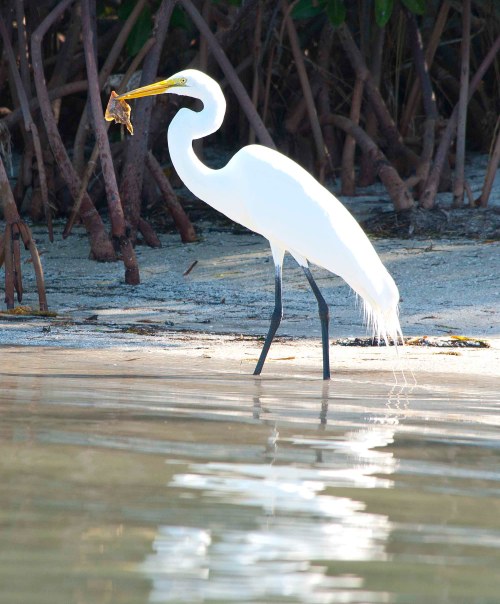 With a tasty morsel in its beak, an egret stands out brilliantly white in the late afternoon light. This was one of many birds that I photographed over a few days in February 2012 while kayaking along the mangrove shorelines of the St. Petersburg area of Florida. Some other bird photos from that trip are here, here, here, and here.

Red is the color of many powerful things, including things infernal. Here is an adorable little devil, on Halloween 2011 on the Upper East Side of New York City. More photos are here, and the story is here.

And now we nominate, in turn, five other bloggers whose photos we much admire (and who, as far as we can tell, haven’t been nominated already) to “Capture the Colour”:

We’d love to see their colors!

(Unfortunately, the contest has a deadline of August 29, 2012—only two days from now. Sorry about the late notice!)

36 responses to “Capture the Colour”