I had hoped to post this last spring, in time for the 2012 camping season. But it’s not too late! The fall, with its spectacular foliage colors, is here—to my mind, the best time of the year to go camping at this spot… and in fact, Johna and I have plans to head up there for a couple of days soon to see the show! 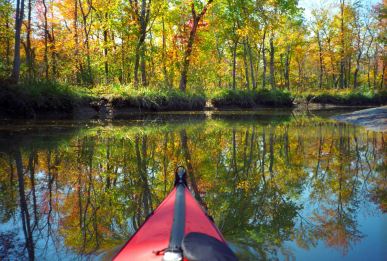 I’ve paddled and camped there many times in every season over the past decade, and I never fail to stop there on through trips down the river. In this complex of islands, back bays, and creeks, rich in plant and animal life, there is always something new to see. And most of the year, except during the peak season in the summer, chances are that you’ll have it all to yourself. Although it’s quite accessible, it feels secluded, remote, almost wild… 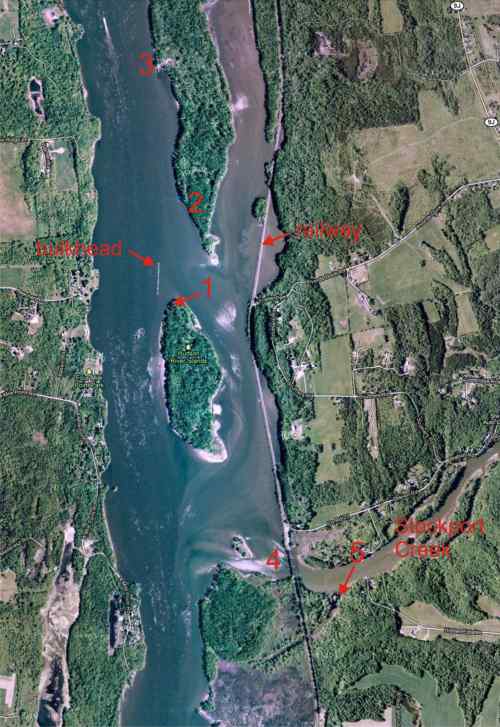 The most picturesque campsite in the park, to my mind, is at the northern tip of the central island, Stockport Middle Ground (“1” in the satellite view above).

There is a nice sandy beach on which to land, with grass beyond on which to pitch the tent.

At one time, the tip of the island was relatively open under the tall trees 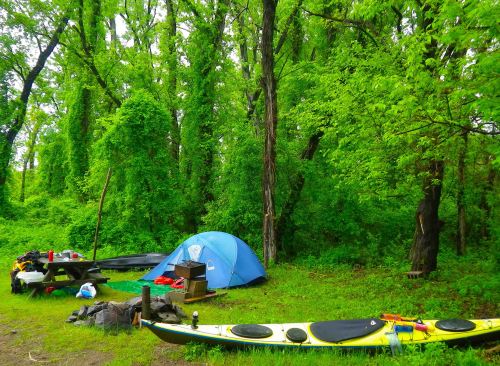 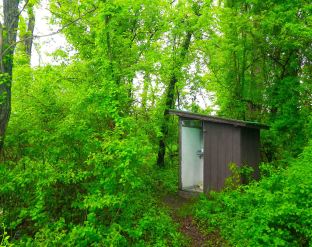 (these photos are from May 2011, the last time we visited. Note the amenities, including a picnic table and an outhouse)

.
… but the view is still magnificent, to the north

and westward across the river 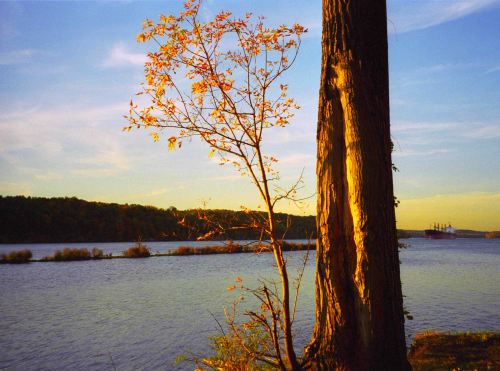 where every now and again a giant ship, an unbelievable sight this far from the ocean, appears… the channel is used by bulk freighters and barges all the way up to Albany.

Note in these photos also the remains of an old bulkhead, separating the deep channel to the west of it from sandy shallows eroded to the east of it, between it and Stockport Middle Ground itself. The bulkhead extends underwater a considerable distance to the north, and it is easy to run aground on it in the current at night. Just sayin’!

On the peninsula to the north of Stockport Middle Ground, there are additional camping possibilities in numerous sandy bays that fringe the shore (“2” in the satellite view)

and farther north still is the main campground area, with a beach and, in the summer, a small dock, toilets, and water, I believe (“3”). This area, however, sees more boaters and campers and furthermore is accessible from inland—in the fall, beware of hunters on ATVs.

South of Stockport Middle Ground, under a railway bridge, is the entrance to Stockport Creek (“4”)

In the summer, camping on Stockport Middle Ground, the water is often mirror-smooth at dawn as the mist lifts off the river

and I drift out in my kayak to watch the sunrise…

And the river becomes still again toward evening.

Off-season camping in the Hudson River Islands State Park has its own special charm. You have the whole park to yourself. The river shimmers with a desolate beauty. 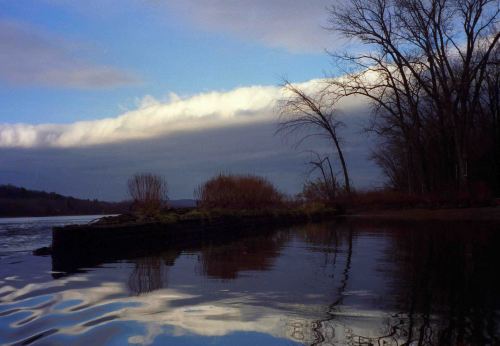 But the best season is the fall. On a crisp fall day, as you emerge from your tent on Stockport Middle Ground, you see the fall colors across the river, and on the island itself, lit up by the rising sun…

Still, for the most brilliant fall colors, I recommend paddling down the river a few miles, past the towns of Hudson, Athens, and Catskill, and into Ramshorn Creek, a small creek that meanders through the marsh on the west side of the Hudson River just south of Catskill (marked on the map at the top of this post). 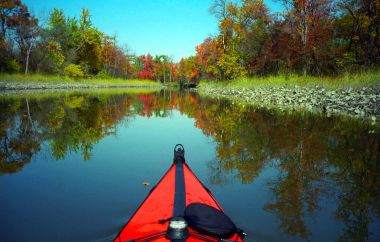 There, on a sunny fall day more than ten years ago, I saw the most spectacular fall colors ever. Everything came together just right—the 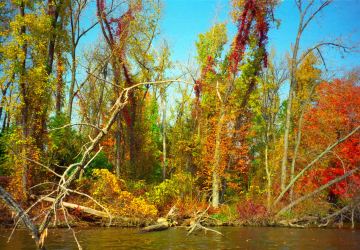 peak of the foliage season, the perfect weather—and an unbelievable profusion of yellows, reds, and purples sparkled in the sunshine against the crystalline deep blue of the sky, all reflected in the still water of the creek… these photos really can’t do it justice.

We hope for another day just like that on our trip this year!

The Hudson River Islands State Park is within easy paddle from boat launches at Hudson, a few miles south of the park, and Coxsackie, a couple of miles north on the other side of the river.  This year, we are planning to take our two folding kayaks on the train (Amtrak) from NYC to Hudson and launch there. Be aware that this portion of the river has surprisingly strong tidal currents, which you can look up here. And if you paddle into Ramshorn Creek, you will be a lot happier if you do so at high tide.

More photos from the area are here, here, and here. Caveat emptor: these photos are old, so some things may be different now.